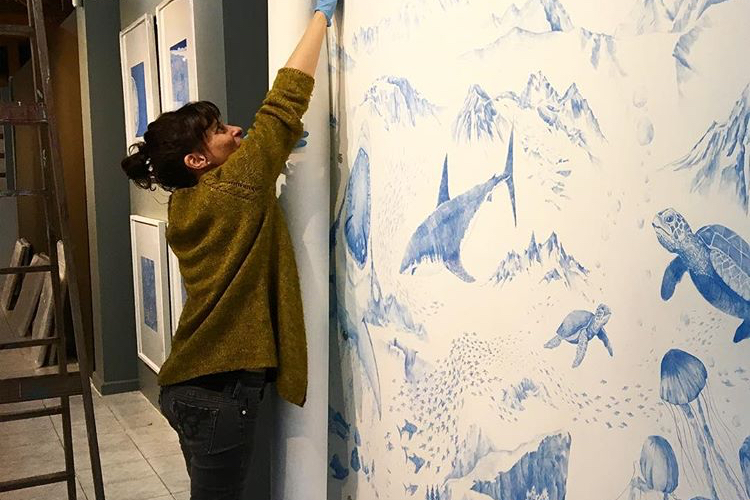 The first thing I remember was the blue. Slow and deep lines, as if they were carved into glazed white pottery. The curves, the shading, the depth, the trees.  Dreamlike blue, filling sheets upon sheets of notebook. Somehow communicating both depth and stillness, intensity and safety, motion and pause. 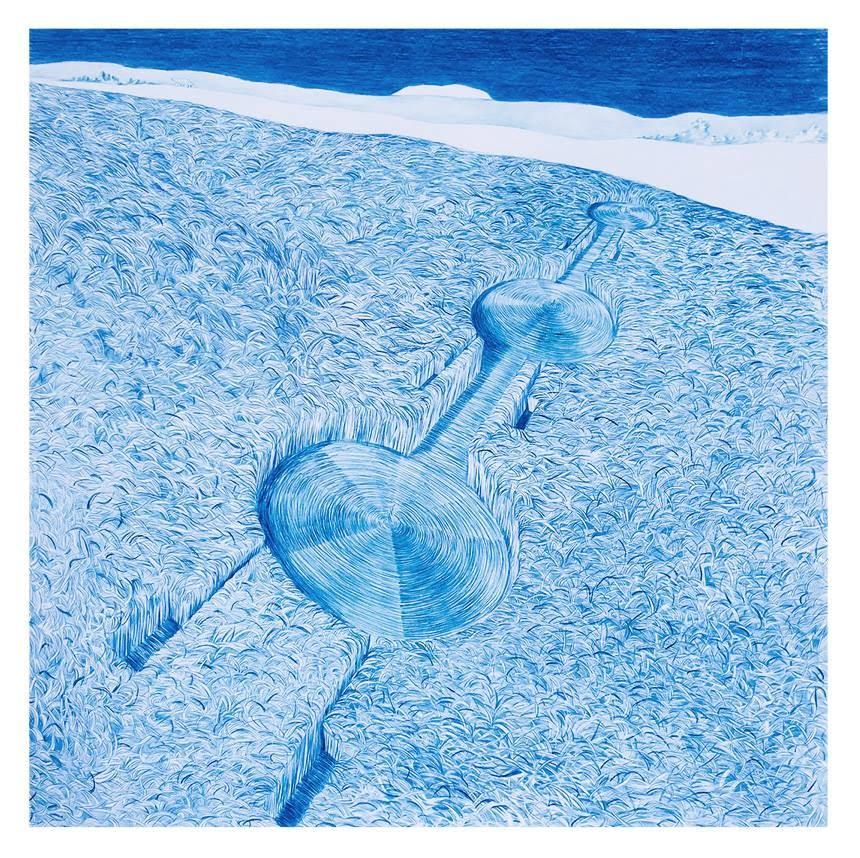 Gabriela Herrera is a Bariloche based artist who holds herself with the same dreamlike stature as her drawings.  She carries joy; the kind that grows out like wild twisted roots. She laughs with her whole body, pauses at sprouting dandelions, smiles at sunshine.  She is at once the curious, seeking artist as well as the child.

She also happens to be one of this year’s winners of an annual grant given by the Fondo Nacional de las Artes [National Endowment for the Arts].  The FNA is a public organization within the Argentine government that finances and supports the development of artists, curators, and cultural non-profits. Through their grants, contests, loans, and subsidies, they promote creation and cultural industry throughout the entire country.

This year, Gabriela was awarded the “Creation Grant,”  which provides $50,000 pesos to artists and curators to help bring their proposals to reality.  We had the opportunity to sit down to chat with her about her history, travels, and current project, “Posibles fuera del tiempo” (“Possible outside of time”).

What was your first memory related to art?

My relationship with art goes back to my early years. I would spend hours drawing and painting.  I remember that I would fill notebooks of blank pages. It filled me, having infinite notebooks full of drawings.  It was, and continues to be, my favorite game. 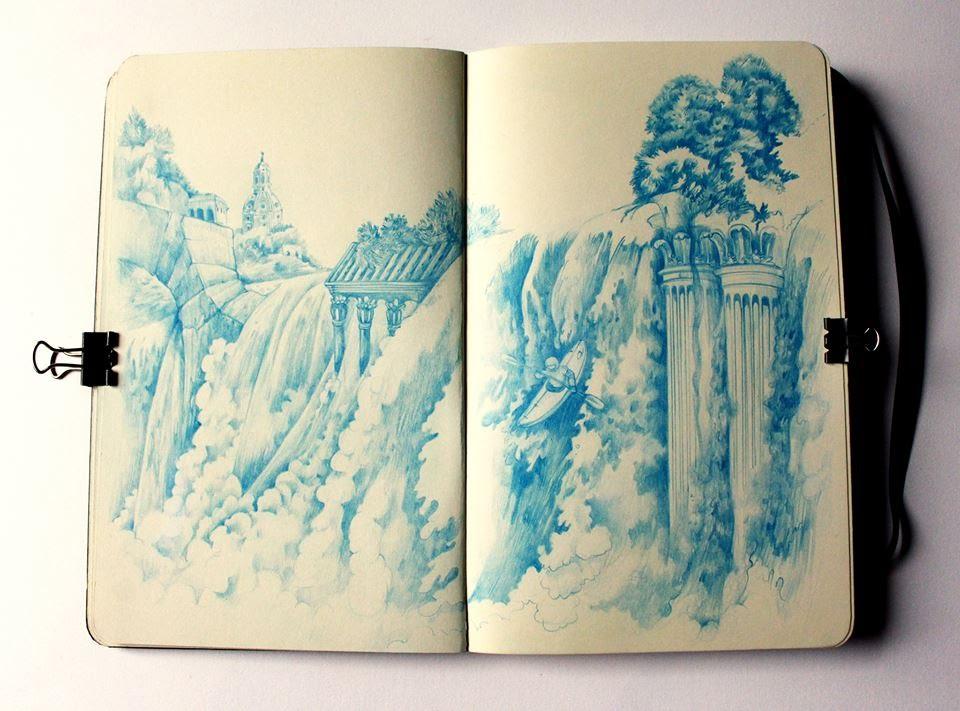 Was there a moment when you first felt like an artist?

I’ve always been an artist.  I studied Art in university, and finished my studies certain that I was choosing this way for my life.  But really, the moment I realized that what I had chosen for my life was possible was selling drawings, paintings, and postcards that I had made at the entrance of The Metropolitan Museum in NY. It was the first time that I could share my work with people from all over the world, from all different backgrounds, and see that they not only liked what I was doing, but actually bought my work.  This was all about 20 years ago.

And 20 years later, you’re still at it.  Can you tell me a bit about the creation grant you just received from the Fondo Nacional de las Artes?

The instructions for participating in this grant were to present a project that can be developed within a year.  You present a detailed project. Idea, development, time divided into stages, and a breakdown of expenses to be able to do it.  The project which I was selected for is called “Posible fuera del tiempo” (“Possible outside of time”). It’s a project that was born a bit more than a year ago now.  It’s the continuation of my last series of blue drawings called “Catastrophes.”

“Posible fuera del tiempo” will be 10 new drawings done in pencil or blue ink on laminated paper with the size of 120 x 120 cm.

I knew before the grant that I wanted to develop these new drawings, independent of the grant.  I applied for the grant to take advantage of the opportunity to have some economic support and recognition of my work.  And happily, I ended up being selected!

So the grant is a continuation of a project you had already started, Catastrophes.  Can you tell us a bit more about that?

Catastrophes was my last series of blue drawings.  I was interested in working with the immensity of the landscapes and the traces left in them by the force of nature or the passing of time. I construct images from the drawing using a blue pencil or blue ink.  I like to create contrasts in the same image. To show in it both the beautiful and the catastrophic.  The end and the beginning after a tragedy.  To try to construct within that magnitude the details that reveal a story.

Think of it like this: The silence of an inert earth is broken and we feel it with unusual roars that we have only heard before in the skies during the storms. The quake lasts seconds, but we would swear they were endless minutes in which everything is suspended and it seems to be another place. At the moment of the impact, the time when the waters are shaken, the earth moves and the territory revolves.  There lies the moment I try to create in my work, timeless and otherworldly, before the end and the beginning of “a tragedy.” I’m interested in the impact and its consequences, the dramatic and imminent value of the peaceful and chaotic, of the time afterwards, of the supposed catastrophe. 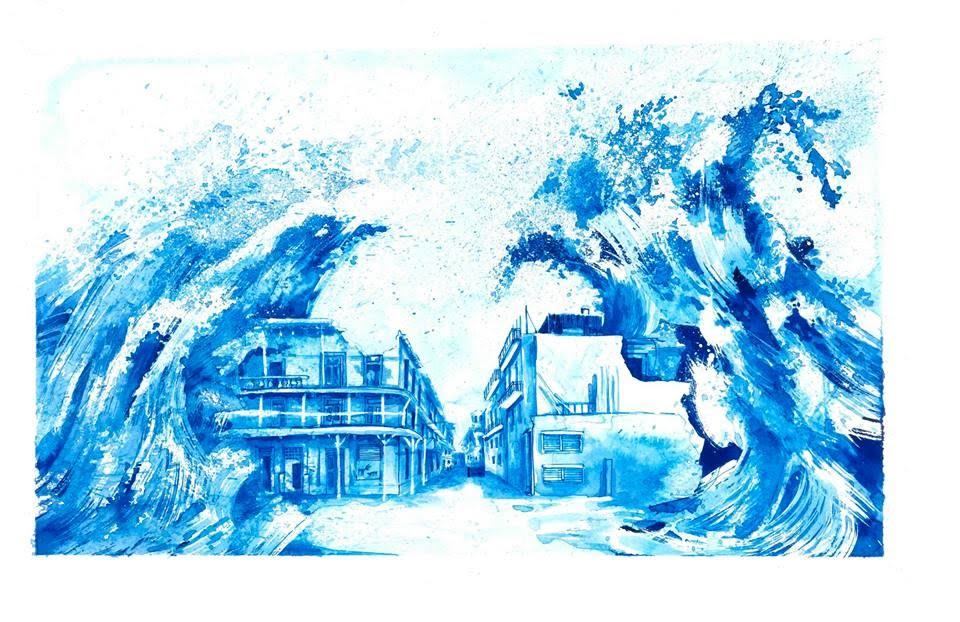 You speak often about “supposed” catastrophes and “tragedies” in your art.  Why do you paint them “supposed” or between quotes?

In the series “Catatrophes,” I always refer to the supposed catastrophes or tragedies of natural phenomena in quotes because that’s how humans refer to them from their vision or point of view.

The spectacle that is generated by the eruption of a volcano, the great wave that generated a tsunami, the torsion of an immense whirl that is seen in a tornado, an ice age, etc.  They are spectacles that are visually and energetically naturally spectacular. And if lives and personal histories weren’t involved, they would be spectacles worthy of appreciation.  But if they are perceived from within, including the damages or losses caused, this magnificent spectacle becomes a magnificent disaster.

What was your impetus to start this project?

In 2009 I moved to Bariloche, and in the face of the unavoidable landscape, my work became heavily influenced by the environment.  The nature intruded on them, as they began to show strength and contradictions. In blue pencil and ink tones, I began to generate spaces that present nature as polarized.  Catastrophes as contrast. Beauty faces the fatal, calm faces the chaotic.

Part way through your project you took a long trip through Mexico and Chile.  How did that transform the project? How did it transform you?

In 2017, the time I spent in Mexico revived my attraction to the origins of ancient civilizations.  I remember my interest in them from a young age. Civilizations that disappeared from the face of the earth, leaving us with all that they were and knew.  Powerful civilizations , monuments hidden in excavations, between thick forests, deserts, oceans, volcanoes.

Everything changes, begins to live, die, and reemerge.  Life prevails. Everything is a whole, an integrated whole.

Then travelling to Chile and living in a holistic center situated in the mountains, surrounded by volcanoe, lakes, Valdivian jungle, confirmed the idea that we are everything.  We know nothing and know everything. We have nothing and have everything. There, I had contact with shamanism and sacred plants that stirred up questions about the environment, space and time, and further contrasts. Nature and civilization, spirit and reason, energy and stillness.

From there, the series took on new momentum, renewed impulse.  I wanted to create more drawings with my blue and capture all of this background. That’s what I want to explore with the grant.  What would it be like if we perceived life without hours or days or years? And what would that allow us to notice?

So the obvious question is, why blue?

I’ve been using a blue pencil for a long time for my sketches, and this led to my desire to keep trying with this color, until it developed itself into a tool.

I like its careful tone, its subtle color, and the monochrome that it gives to the chaotic image, unifying it. 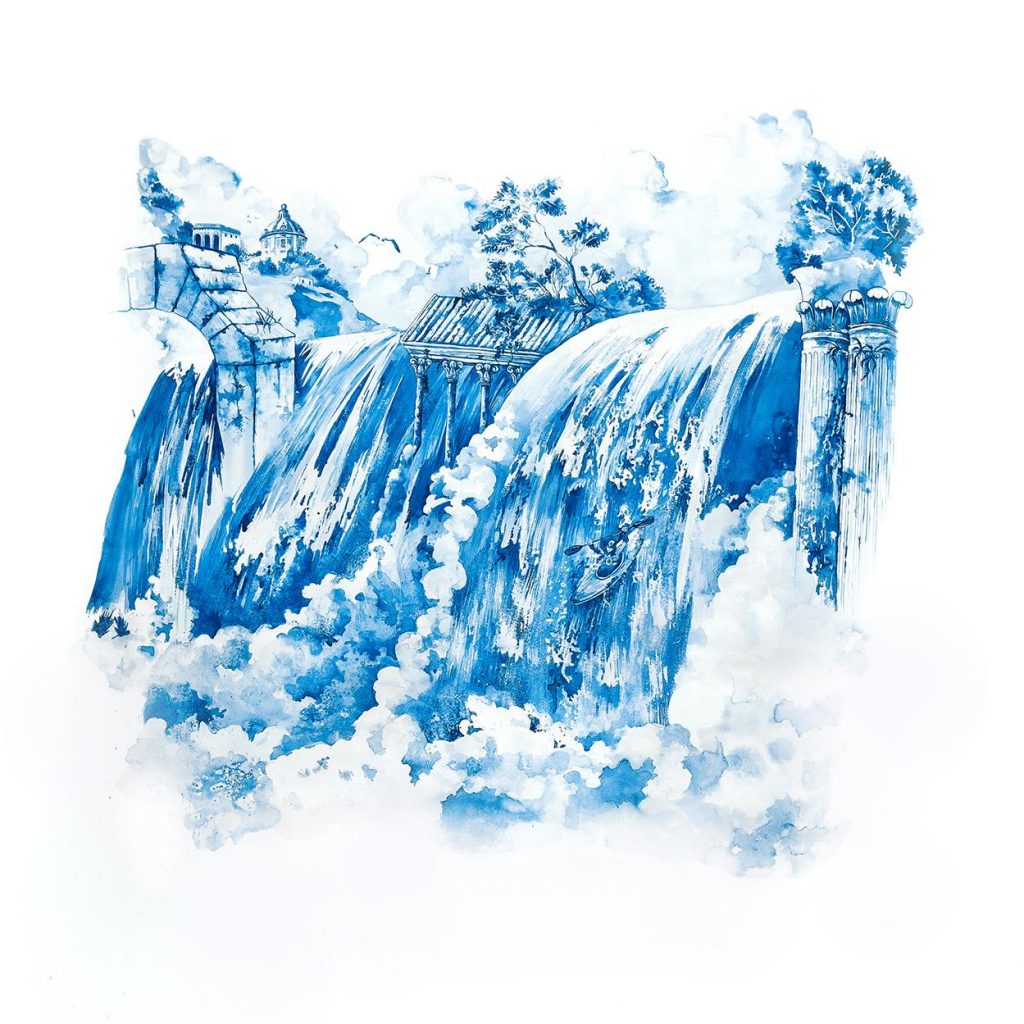 The majority of this project has surrealist elements.  What aspects of surrealism attract you?

Honestly, the artist movement surrealism doesn’t really attract me. But having the characteristics of my drawing a bit dreamlike, realists associate them with surrealist works.

These days, many people describe the state of the world (politics, climate change, poverty) like a tragedy or catastrophe.  Do you sometimes think about these things within your artistic process?

Yes, the speech continues: We are all one and one is all.  So yes. You can’t separate any of this.

But when I choose what images I’m going to represent to transmit my idea or feelings, I’m inclined to something poetic, or drastically poetic.  I choose to build a metaphorical image. An image in which a reality or concept is expressed through a reality or different concept. But now I’m intending to explore new forms of perceiving and understanding nature, and through that, life.  Trying to expand what is known so far from my reality and connect with other realities or knowledge regarding how to be the help of my different worldviews.

Gabriela’s work is will be on display in the cultural space Estación Araucanía in Bariloche until mid December.

Pieces are available for purchase through her artist website.