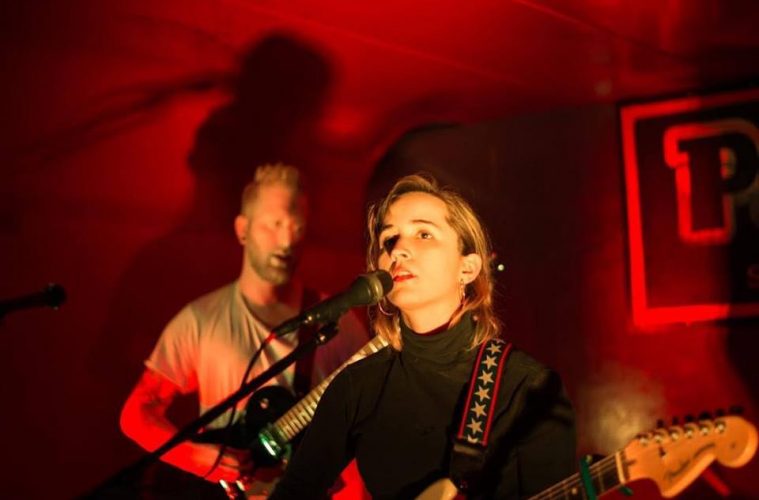 Maria Codino, frontwoman of De Incendios, who are playing on Saturday!

It’s that time of year again – ghouls and ghosties are running amuck in the night, tricks and treats await you around every corner, spooky skeleton memes are filling up your Facebook newsfeed, and you are still wondering if “pumpkin spice” is ever going to happen for Argentina.

Somewhere in the dead of night, in the wee hours of the madrugada, down a dark alleyway, in a shadowy basement, are echoing the screams and screeches of LIVE MUSIC.  And, thankfully, La La Lista is here to tell you at exactly which haunts and hollers you can seek out and bear witness to this frightening phenomenon. Here’s our lineup for this week:

Come out Wednesday night to this special event organized by ZeZé, the Peruvian poet, promoter, and patron-of-the-arts extraordinaire who always wears his sunglasses at night. As ZeZé says, “when you’re blind, everyone is a ghost” – don’t miss your chance to come out and be a part of what is sure to be a haunting experience! The event will feature women from all over the Americas, with live music from pianist Eugenia Guzmán, Mexican singer songwriter Paola Ventieri, and Peruvian singer songwriter Santa García. There will also be poetry readings, and you can get your tarot cards read for 100 pesos.

Your favorite (Sorry, I’m projecting – they are my favorite. But they could be your favorite too!!) Growlers-inspired surf rock band from Boedo, Playa Sintética, hits the stage again this Thursday at Club Plasma, along with the bluesy, folky, stoner rock ‘n rollers Pasco y los Lobos and new-on-the-scene dream-poppy trio, LeFaune. I’ll be there!

Yolanda Discos and Casa del Puente Discos are joining forces to bring us a night of splendid music in Capital Federal. Queridas has come all the way from Rosario to gaze at the Buenos Aires stars and play dreamy stargazey music for us. Nunca fui a un parque de diversiones, who play a style of music they call Canivaldombe (a mixture of Latin rhythms crossed with samples and tribal songs) will be joining in from La Plata, for their first show of the year in Capital. Dream poppy post punk rockers Altocamet are coming up from Mar del Plata, and, last but not least, locals La Vida en Familia are bringing their vintage dancey beats from right here in town.

I first saw Jorge Arias y Los Pampeanos Galácticos last summer in La Plata, at a show where they opened for Niños Envueltos. It was a noche peposa for me, and I sat in the back of the room, hugging my knees and staring wide-eyed at the band while their music TOTALLY BLEW MY MIND. Then I went home and listened to their album El Corazón y el Perro on repeat for weeks. I highly recommend it. Singer songwriter Juanito el Cantor, whose songs can be compared to rain on a sunny day, will be featured as the opening act. You can buy tickets online at this link!

Looking for a super ska-ry show? One where you can meet other people who like ska puns as much as you do? Thi skan’t be missed. Five bands, all in one place! Albatros, Kevin & The Ska Bosses, Pa’ delante Ska, Malambo Ska Band, and LNG – Leningrado will be playing on the main stage, and on stage B (the secret little room behind the ticket office) there will be acoustic performances from Federico Laconte, Bie, and Bidegain y Los Psicópatas ambulantes. In addition to the music, there will be art exhibits, stand up comedy, and a two for one promo on beer and fernet until 10PM!

The seventh edition of Fervors’ Haus Party is happening this weekend! On this occasion, in addition to the customary live music performance by our beloved Fervors, we will be graced with performances from La Vida en Familia (chill, reverb-y bedroom music with crooning Mac Dimarco-esque vocals) and De Incendios (dance-able indie rock beats and riffs backing up the pop melodies and candy-sweet vocals of frontwoman Maria Codino). Come hungry, thirsty, and naked, because there will be delicious food, sensual beverages, and vintage clothes for sale! (Don’t actually come naked.) (But, I’m just saying, if you did show up naked, you could get clothes there, so it would be okay kind of.)

Don’t miss this killer line-up at the second edition of Buenos Aires Nueva Ola (New Wave). The contemplative kraut-rock inspired dream pop of Ex-Colorado; the dark, haunting melodies and powerful female vocals of Juvenilia (their lead singer’s voice is like…imagine Shakira, but if Shakira sang in a Nü Metal band, like Evanescence – it’s lovely); the out-of-the-box psychedelic spaz rock theatrics of Gente conversando (one of my favorite local bands); and the groovy tunes and melodies of upbeat power pop indie punk group BOEDØ, all in one explosive night at Rincón Casa Cultural!

Mi Pequeña Muerte is a band that formed in San Martín eighteen years ago (wow, I was seven then). Many people know them for their appearance on the soundtrack for the movie Como un avión estrellado (2005). Their most recent release was the album Alimentan los Lobos, which was released in June of this year. This Saturday they will be sharing the date with singer songwriter Rosario Bléfari, accompanied by her backing band, who will be presenting a new single which is to be released on Friday.

We invite you to visit Club Cultural Matienzo, one of La La Lista’s favorite places in town, on Sunday. Canciones de la Ruta is an itinerant event that brings together artists from various corners of the country. For its seventh iteration, the event will feature music from the Cáseres / Caiazza duo Doleser, who are celebrating their ten year anniversary this year; Fede García y La Fotosíntesis, a collaborative  project that seeks to incorporate rhythmic diversity and defy stylistic limitations; and El Gran Búfalo Blanco, warm, delicate songs with a dreamy, dancey groove.

La Buena Vibra is an attitude that infects us and brings us together, in a city whose music, art, and people, all vibe together. Live music and art, exhibits, and the desire to live in the moment make this a can’t-miss festival for the restless youth. This edition will feature performances from emotional funk artist Emmanuel Horvilleur, pop group Bandalos Chinos, afro-dub stoners Morbo y Mambo, jazzy alternative pop artist Candelaria Zamar, psychedelic indie pop group Telescopios, experimental folk artist Weste, and R&B/soul artist Chita.