Rules to Live By | 10 Commandments for Musicians

Rules in rock and roll?! Yes Virginia, they’re necessary. After years of playing live in this city, I’ve seen the best and the worst of band behavior, and so I’ve come up with these ten commandments for being kind to audiences, venues, sound engineers, bandmates, and fellow musicians. 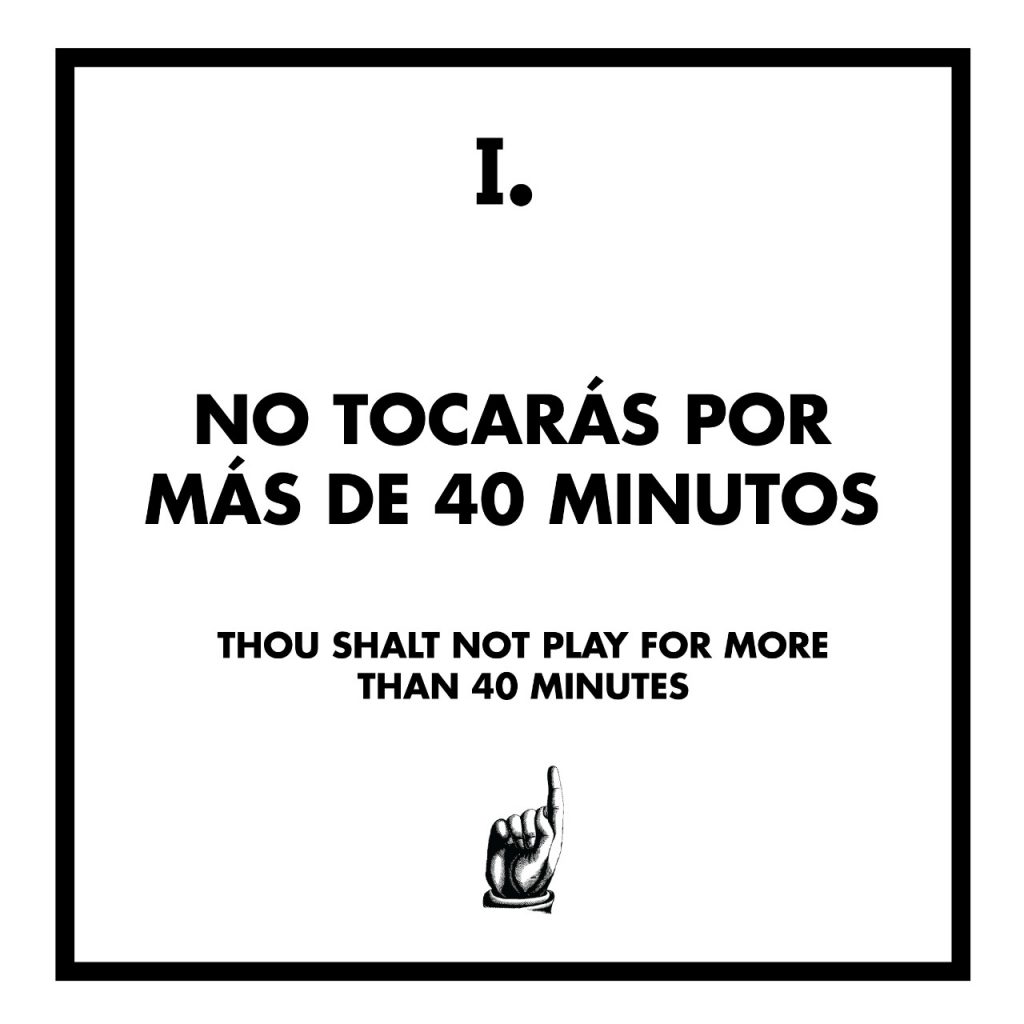 THOU SHALT NOT PLAY FOR MORE THAN 40 MINUTES

An internet friend of Jorge’s wrote this hilarious article with the premise that all musicians s should play for no more than twenty minutes. We think this may be extreme  — especially for non-punk bands who have longer songs. Forty minutes is a comfortable amount of time to play 7-9 songs, which seems to be enough to satiate audiences without draining their will to live. 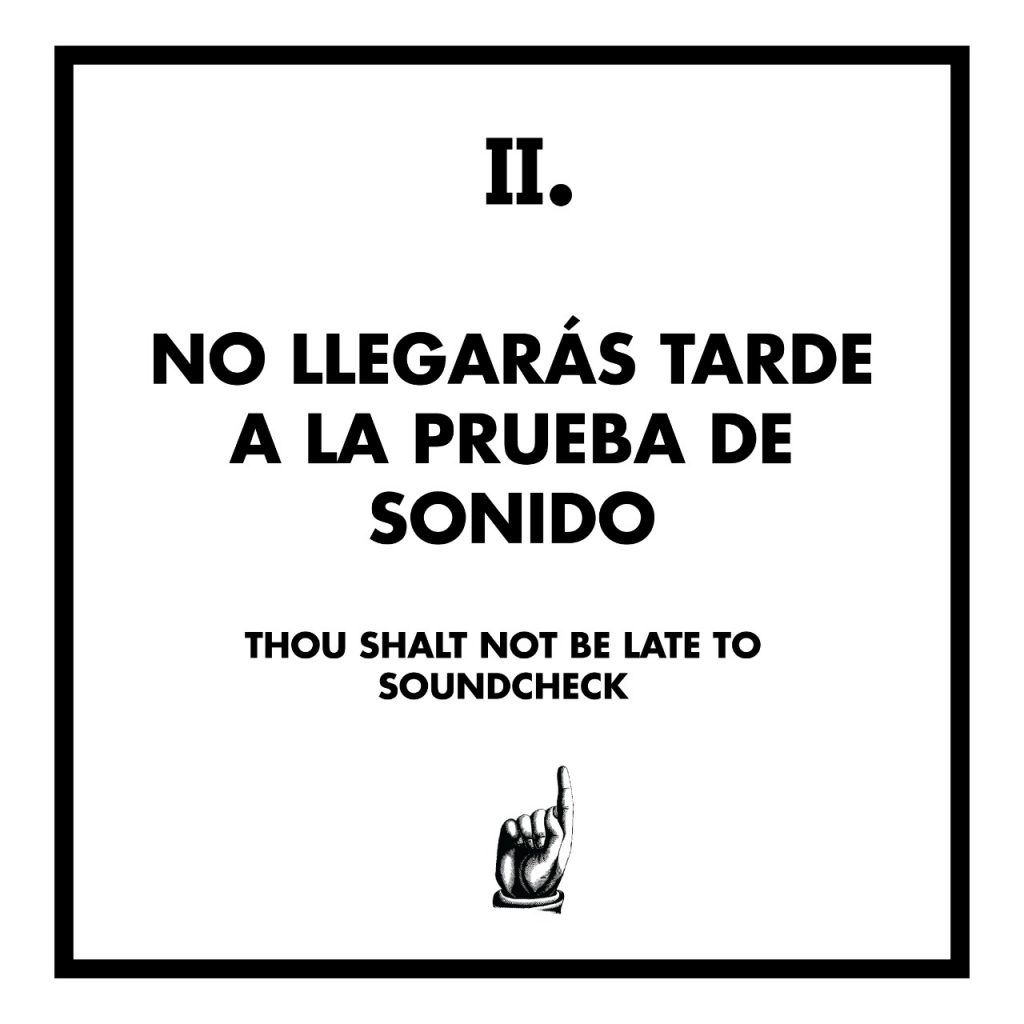 THOU SHALT NOT BE LATE TO SOUNDCHECK.

This is especially crucial when you’re splitting the backline with other bands. There is nothing worse than arriving by the designated soundcheck time (+30 minutes, because Argentina) and still waiting for an hour in the fully lit venue (you never really want to see the whole venue) for the other band to bring that guitar amp so that all three bands can rush through soundcheck in 20 minutes. Show up early, finish your soundcheck, and then go eat pizza/Peruvian chicken before the show. It’s not hard, people.

THOU SHALT PROMOTE THY SHOWS

It’s a tiresome reality of being an independent musician —  you are also your own manager, promoter, and graphic designer. Don’t like it? Tough noogies. Luckily, there are a million different tools available nowadays for bands to promote live shows, and if you’re not taking advantage of them, you are LAZY. My personal advice is to divide and conquer —  find the most artistically gifted band member and give them the task of designing your flyers. Is someone particularly chatty or popular on social media? Well then, they are your content planner. Whatever the case may be, everyone should be sharing the flyers and FB events on social media in the weeks leading up to the events.

THOU SHALT NOT OVERBOOK THY BAND

Look, the reality is (with few exceptions) the typical indie rock band only has the audience for one, maybe two shows a month. Don’t put the venue or the other bands in the crappy position of not making enough money for the night because you’re bad at scheduling. 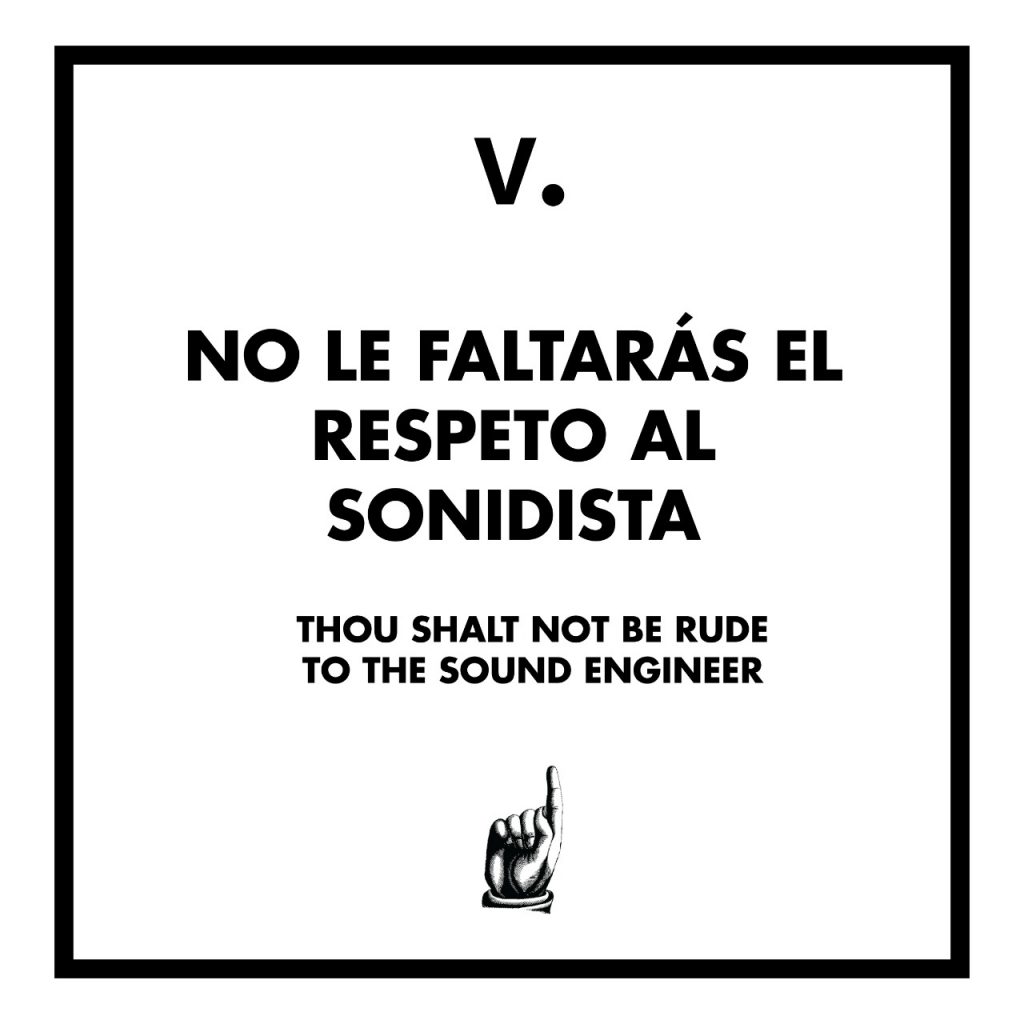 THOU SHALT NOT BE RUDE TO THE SOUND ENGINEER

In addition to just being a not-nice thing to do, this is completely stupid from a strategic perspective  — your sound engineer has the ability to make or break your show with a twist of a nob. Be good to these good people, unless they’re a coked up son of a gun who insists on playing Throbbing Gristle between songs at maximum volume (yes, this has happened. I still get slightly homicidal urges whenever I think about that dude’s face). 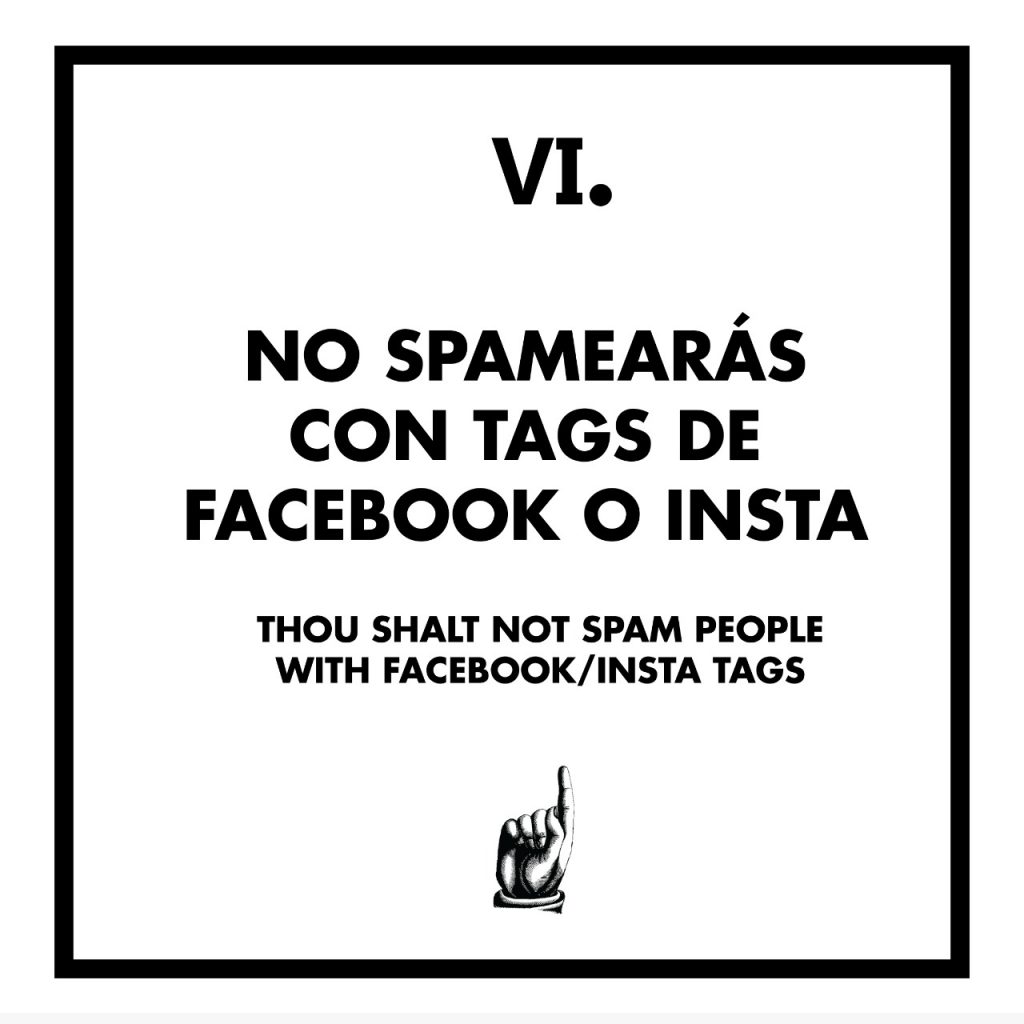 THOU SHALT NOT SPAM PEOPLE WITH FACEBOOK/INSTA TAGS. 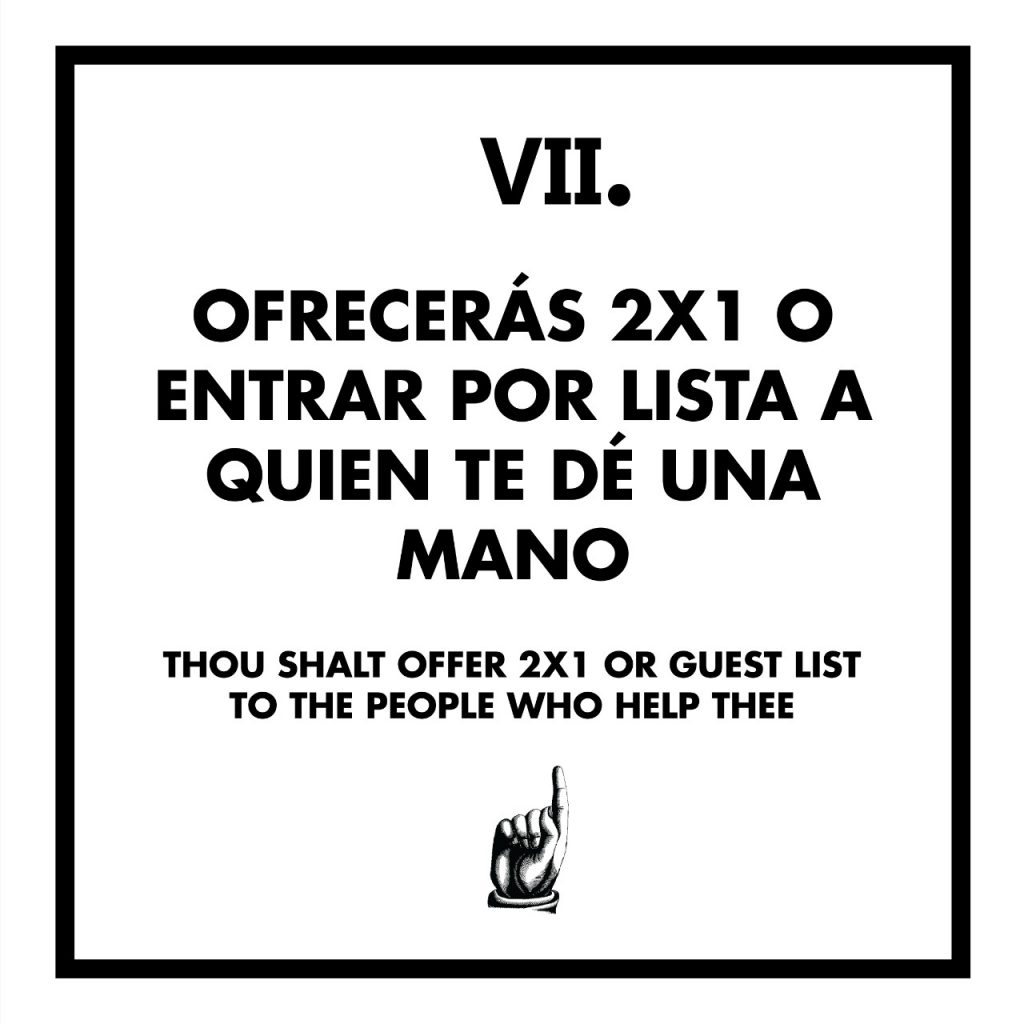 THOU SHALT OFFER 2X1 OR GUEST LIST TO THE PEOPLE WHO HELP THEE.

This applies to journalists, photographers, radio show hosts, etc. I’m not saying that someone who writes about or takes photos of your band once should be on the list for every show  — if someone expects that, they’re a horse’s ass. However, if these people are dedicating their (often unpaid) time and talent to promoting your art, the least you can do is make sure they enjoy one live set for free, especially if they’re doing a full-fledged interview or feature.

ps. If they’re anything like me, they’ll bring a friend whenever possible and split the price of the ticket  — so you don’t even lose anything by inviting them!

pps. If they’re a lot like me, they probably don’t have time to go to your show anyway! But they will very much appreciate the offer and remember you for it. 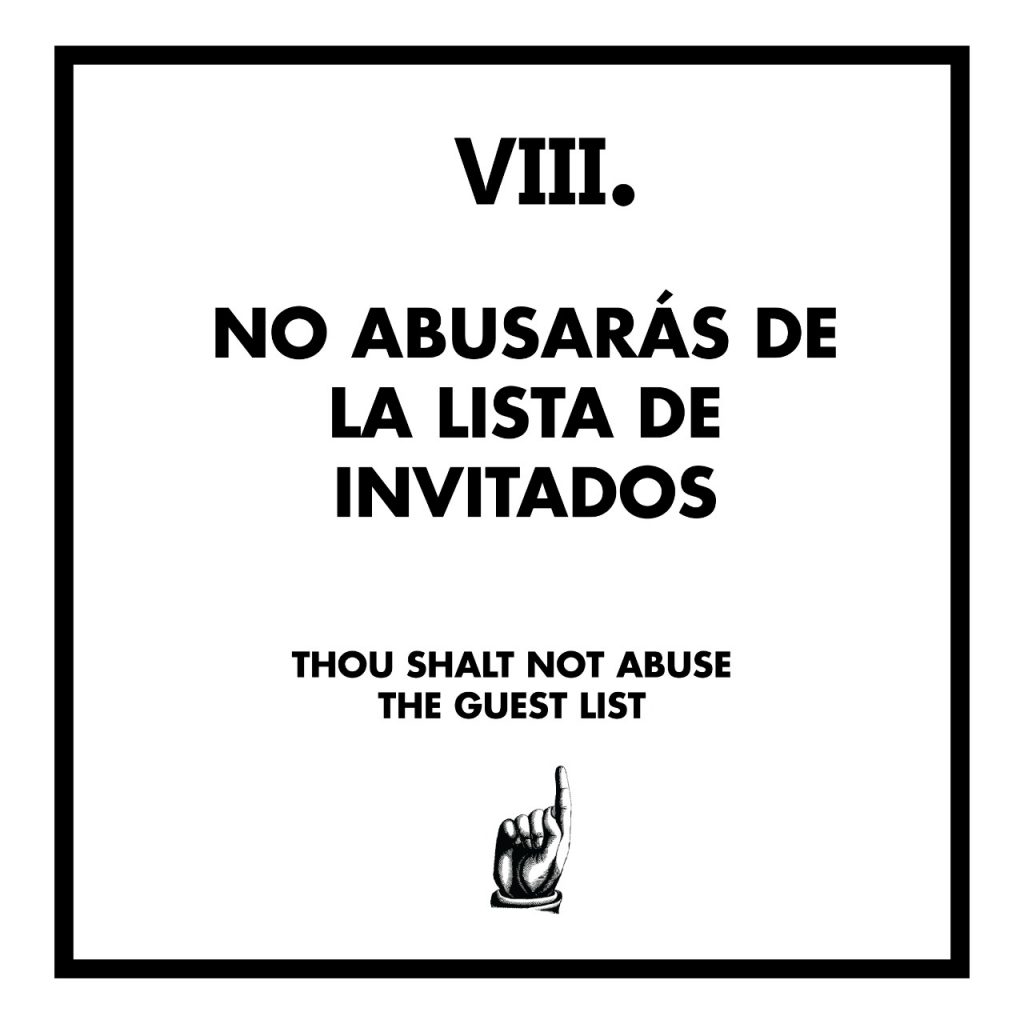 This one is pretty simple: if you invite all of your friends to come in for free, you and the other bands won’t make any money! Don’t do this! Limit yourself to one person per bandmate, for your significant other or mom, plus any people who have helped you out recently (see rule 7). 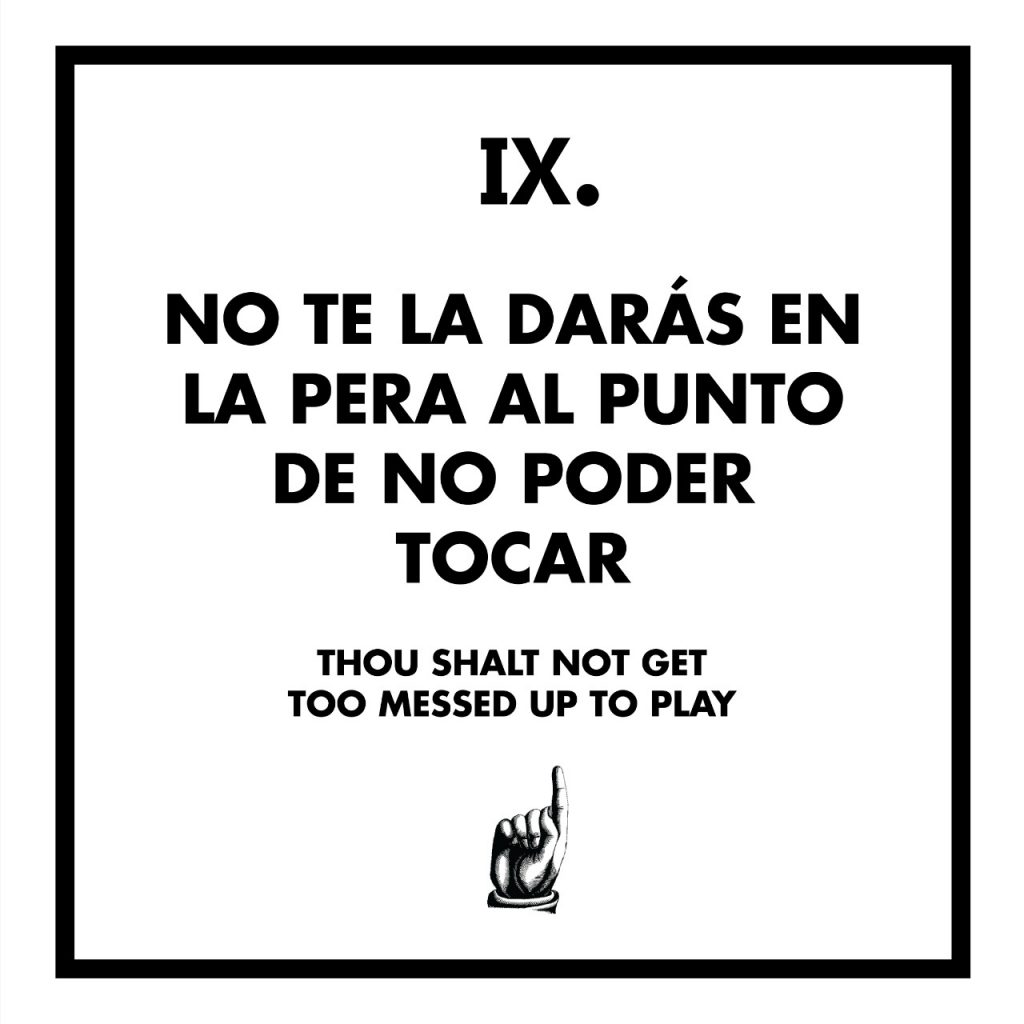 THOU SHALT NOT GET TOO MESSED UP TO PLAY

There’s nothing wrong with having a drink or two to get over the stage jitters and relax enough to enjoy your set. But when you overdo it, your show suffers, and we notice. 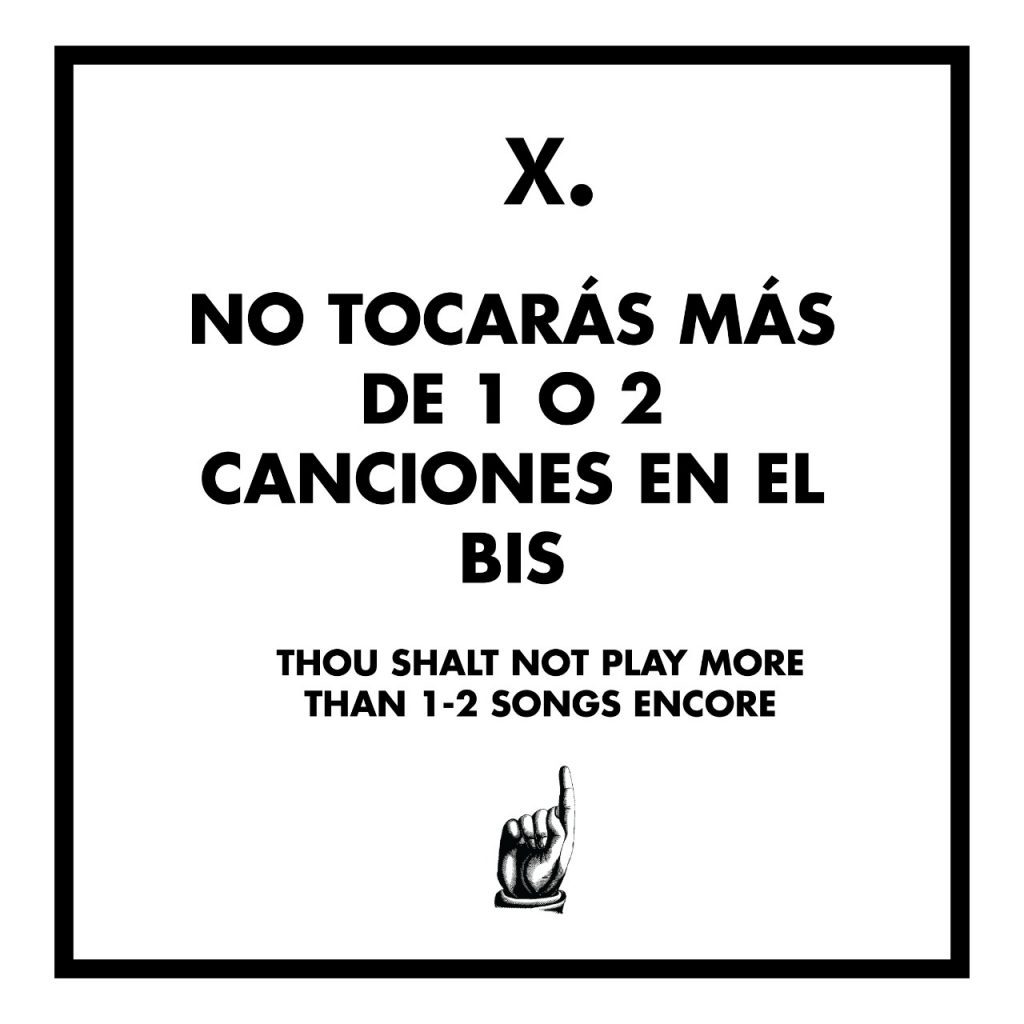 THOU SHALT NOT PLAY MORE THAN 1-2 SONGS ENCORE

The next band either wants to set up or take their amp home, and everyone is tired of you. Hell, after a solid 8-9 song set, I’m tired of myself. Stop playing, really. Even if that one wasted guy in the corner keeps screaming “una mas” —  he’s probably just asking for another beer.