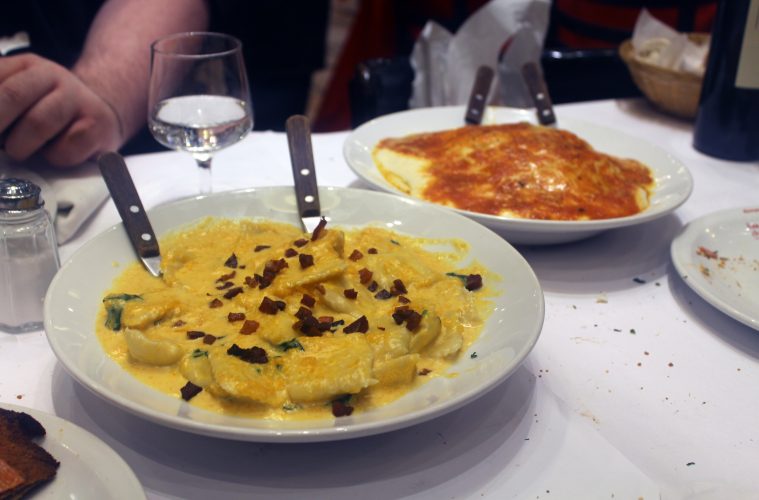 The waiter spots me from across the room and makes a B line for the table. I am the only one seated at a mesa for eight and feel like I’m shrinking as he inches closer. He offers his hand and grips on to mine so hard I can feel my bones crack and the scar on my middle finger scream with pressure.

“My name is Victor,” he announces gently, “I don’t recognize you, have you been here before?” The bombardment of kindness catches me off guard. I look around: people slowly flood into the room and their regular server moves in, like a date waiting for a slow dance, to deliver a kiss on the cheek and an escort to the table. “Order some wine while you wait,” Victor continues, “We have our own wine. It is the best one and also the cheapest.”

This is Los Chanchitos, a restaurant co-op on the edges of Parque Centenario. The staff took the restaurant over in 2012 alongside 5 other restaurants owned by the same business and you can sense the ganas that are notoriously absent from your average over-sized bodegón.

As the name might suggest, you’ve come to eat like a pig. Stick towards the mammoth-sized dishes that have been labeled para compartir. In all honesty, even in the absence of such a title, nothing here is meant for one human.

The best dishes aren’t in the pizza section, nor the pasta section either. Although if you are in the mood for a bowl of noodles, stay away from the ricotta raviolis topped with lumpy pumpkin cream and bacon, which tastes like milk mixed with out of season squash. Do steer yourself towards the lasagna, which is served in a bowl the size of a basket ball hoop and layered with chunky bolognese, topped with an inflated mixture of molten cheese and red sauce.

The milanesa napolitana is another monster. Rolled out like a pizza dough, it’s a dish of hilarious proportions. But that’s just the beginning, there is also tender pork shoulder stuffed with provoleta and panceta that comes topped with mushroom cream sauce—don’t be put off by the odd brown coloring—that should be scooped up with over-sized squares of crunchy roasted potatoes. This is assuming you haven’t dropped the contents of the dish onto the white tables after a second bottle of the house Malbec is passed around the table. The wine, by the way, is lovely; just slightly fruity and a good accompaniment to everything I’ve ever ordered.

Meats are buried underneath Everest-sized mountains of fries. Rump steak is affectionately named El Gran Colita, served with a salad minus the greens: tomato, eggplant and bell peppers. I prefer the Gran Porteña which comes with slices of eggplant crucified on a stick over a bed of fries that hides the tenderloin underneath. Two fried eggs served extra runny slowly waterfall through the potatoes and onto the smokey cut of beef. For dessert, enormous milkshakes called copas spill over with chocolate ice cream and dulce de leche. The flan de manzana is pretty trashy. I expected layers of sliced apples worked into a flan. You can see the ribs of the can form over the gelatinous granulated apple sauce. It is, like each and every other ridiculously plated dish, thoroughly enjoyable.