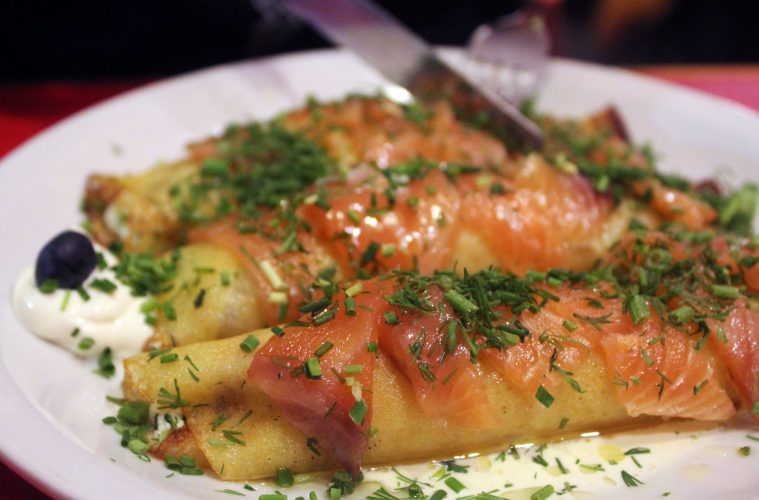 A flash of fluorescent white light summons us to El Molino Dorado. Like a magnet, it guides us down a particularly dark street on the south end of Almagro. Its owner, Dimitri Svetlichniy, spots us from afar and waddles over to pull the heavy peppermint green door open. Russian music spills outward like a strong gust of wind, playing loudly from an old tv set over a constant loop of ballet videos and communist-era films.

The packed dining room feels teleported from 1970s Eastern Europe, almost as if it were a meticulously re-created set from an old Fassbinder film. The walls are painted in elementary school orange with old family photos, matryoshka dolls and elaborately decorated china thrown around the room with no particular eye for decorating. There is even a small group of students packed around a table in the corner that holler loudly about the role of women in communism between generous shots of homemade vodka. Svetlichniy interrupts only to carefully place cossack hats atop everybody’s heads to complete the portrait.

This section of Almagro, a tiny southwest corner where its boundaries with Boedo and Caballito begin to blur, oddly enough is home to a small group of Russian immigrants. Many customers are Russian expatriates or wannabes that wander over after language classes at the Russian cultural center housed down the street. The rest are neighbors whose loyalty to the restaurant is echoed loudly when they comfortably bellow out, Do svidaniya or goodbye, in unison. 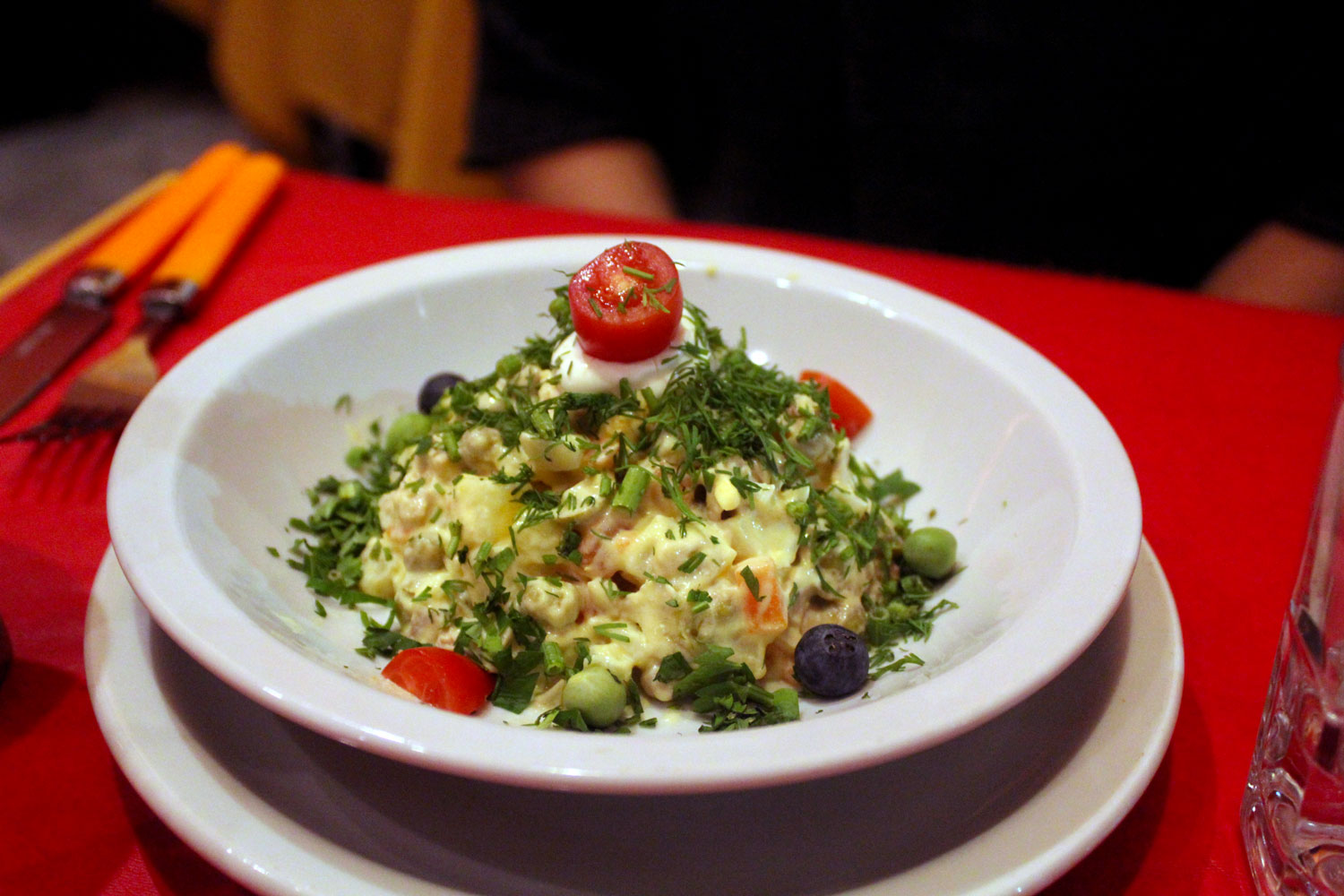 “The real Ensalada Rusa,” according to owner Dimitri Svetlichniy.

Meals at El Molino aren’t elegant dinners out. The menu is illustrated with photos to highlight a dozen homey dishes of both Ukranian and Russian origin—Dimitri describes in incredible detail the ingredients of every single dish if you look even slightly lost. His scripted explanations spill out with such dizzying velocity in a way that adds to the atmosphere more so than clear up any doubts. Or maybe it is an elaborate ploy to get you to order the vodka tasting, three shots of vodka distilled in-house, to calm the brain from the overload of information. You would be wise to take the bait.

On your first visit, you will probably start with the vareniki—delicate white dumplings filled with  potato that has been whipped so smooth it dissolves on the tongue. The filling isn’t packed with much seasoning, and it doesn’t matter, the ordinarily bland puree simply becomes a medium for which to scoop up crispy cubes of panceta and fried onion with a generous brushstroke of a slightly salty cream sauce. You will likely move on to blinis, slightly sweet pancakes which are stuffed and rolled into long cigars. Caviar is imported from Russia, but Dmitri recommends ordering it the first week of each month when it is at its freshest. Cured salmon and ricotta are a fine substitute. Don’t underestimate the Ensalada rusa, “the real one”, according to Dimitri, a nostalgia inducing potato salad which is made fresh with the additions of bushy leaves like fennel and dill. 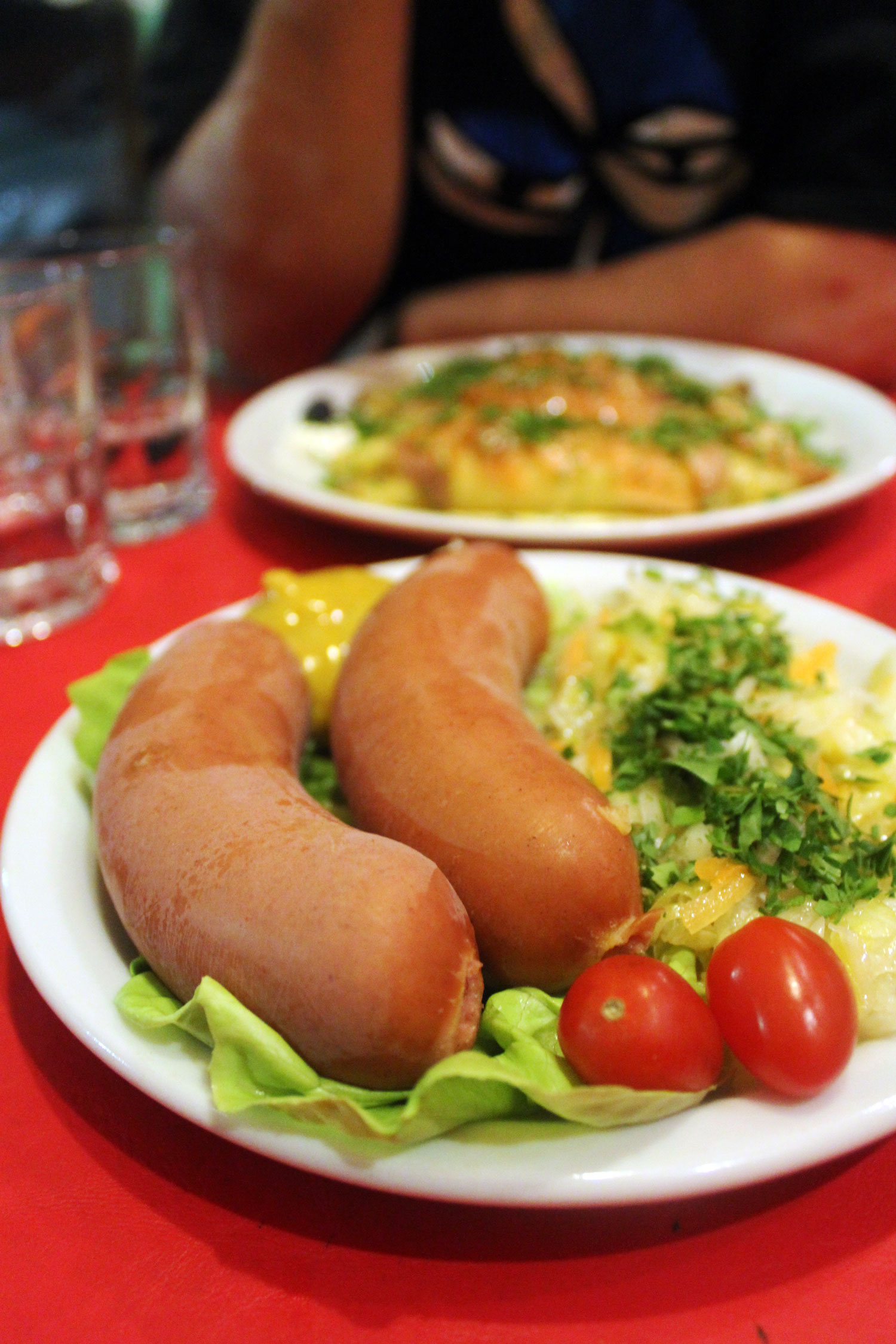 You should also venture to the other side of the menu and try a pork and cabbage stew delivered in a ceramic pumpkin gourd. The stew is built for a cold winter night—a hearty and familiar tomato broth is sharpened by bitter pops of raw green bean and tart bites of blueberry. Unsuspecting pork sausages are suggestively sized and plopped down austerely between a messy spoonful of spicy mustard and a mountain of crunchy homemade chucrut. The homemade salchichas are sturdy and flavored with smokey notes of pork fat and chives.

For dessert, the blini returns in three sweet versions. Locals tend to lean towards the dulce de leche but head for the sweet ricotta. Dimitri recommends the Napolean, a creamy puff pastry stacked impossibly high that cracks apart awkwardly when you go at it with cutlery. “Grab it with your hands,” he says, “it’ll taste better that way.” He was right, but maybe it was also the fourth shot of vodka.

Open: Tuesday through Sunday from 8pm to midnight