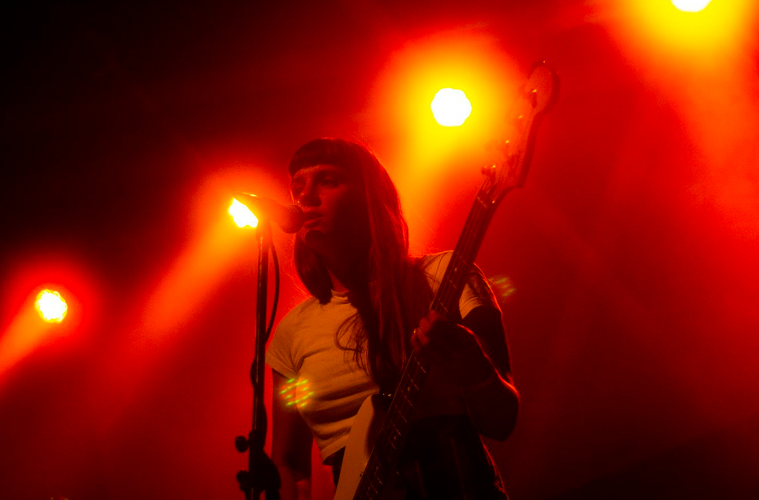 So, how about that raging out-of-control monsoon we had the other night? If you didn’t have any valuable electronics damaged by a surprise malevolent gotera dripping from your bedroom ceiling, that makes one of us, and I congratulate your good fortune.

For those of us who weren’t so lucky, well, at least there’s still live music.  AND, even though this is a music agenda, not a weather report, I am pleased to inform you that there is NO RAIN at all on the forecast! That’s right, folks – the only wetness you’ll be experiencing this week will be the SICK REVERB from the live bands at the deluge of events I have to share with you this week:

OID NOS is a once-a-month ciclo of electro-acoustic music held in the Centro de Arte Sonoro (CASo) of the Casa Nacional del Bicentenario. For this edition, they are pleased to present two activists of the Buenos Aires radical sonic front: Minicomponente and Barca Vikinga (AKA Vic Bang). Minicomponente is an Argentinian producer, guitarist, singer, and audiovisual artist whose current sonic endeavors include a mixture of drone, noise, and prog music with layers of ethereal voices and danceable beats. Vic Bang is the solo project of the autonomous and automated autodidact Victoria Barca, who is a self-proclaimed “anti-professional” guitarist and drummer. At this event, both women will reveal their latest explorations in electro-acoustic format.

of Montreal in Niceto Club

Mad genius/tortured artist Kevin Barnes and band (and whichever alter egos he has chosen to bring along for this tour) will perform oM’s latest album, White is Relic/Irrealis Mood, (and probably at least a track or two from Skeletal Lamping and Hissing Fauna – gotta give the people what they want) at Buenos Aires’s very own Niceto Club. You will find me here Thursday night, hoping to meet new friends in town who are as obsessed with oM as I am, because I currently have none, and it is a void that wants to be filled. 😉 Opening for of Montreal will be Ese Perro, an indie-pop group with a similar performance style to that of oM, involving costumes and characters and audiovisual trippyness, and Babauh, experimental pop solo project of Adrián Rivoira (whose show will also feature rad visuals).

At this event, we are invited to “dive deep into a new sonic episode” at Korova. Soloists Sergio Massarotto and ATILLIS will kick off the night, followed by driving, lo-fi, bedroom-gazey Nostrónomo. Then experimental post-punk group Zé Cörto will bring their unique flavor of juicy mathiness to the table (I’m listening to their self-titled album right now and it is totally fire), and Noviolento will close out the night with some more alternative post-punk, steeped in the flavors of rock nacional (pretty sure it’s the vocals that are giving me the rock nacional vibe).

This show celebrates the release of the compilation album Pidamos Mandiocas a Mínima: 50 años de rock independiente (1968-2018) homenaje de Mínima Discos al sello Mandioca (in other words, 50 years of independent rock, Mínima Discos‘ homage to the Mandioca record label), as well as the 50th anniversary of the influential label. There will be a toast to the occasion, some talks from special speakers, acoustic sets, and a listening party, as well as other surprises. You can listen to the compilation here.

Once again it’s party time at Mi Casa. Friday night will feature Cabeza Flotante, bringing rhythms of evolution and precise harmonies for the entire planet, BOEDØ, “hermit pop for people who like to go out,” and Mapa de Bits, who make music that compares the everyday life of the Buenos Aires scene with the vile life to which thousands of soldiers were subjected to in the worst warring territories. (No, really – check out their 2013 album Escenario de Operaciones, which features tracks such as “Afrika Korps,” “Almuerzo en Saigon,” and “Ingreso Triunfal a Tobruk.”)

MUJERCITAS TERROR is a rockabilly-punk trio that’s been around for over ten years, and they have fans all over South America, the US, and Europe. This Saturday they’re playing a SECRET show in Capital. To get the address for the show you must 1) not be a cop, and 2) send a message to the band on Facebook.

Singer, looping artist, crafter of songs, do-er of good magic, former sitcom actress, and one of the most widely recognized and influential contemporary Argentinian musicians – Juana Molina – returns to Niceto Club this Saturday. She will be performing songs from her most recent album, HALO. If you can’t make it – DON’T WORRY – she’s playing again at Niceto Club on October 19th, and you can even get a package deal if you want tickets for both shows. Here is a link to buy tickets.

Come ride the wave – of Mi Nave‘s dark, surfy psychedelia in Centro Cultural Kirchner, for FREE! If you haven’t listened to them before, go NOW and listen to their most recent album, “Ojos Cuadrados.” (It’s on YouTube and Spotify.) my favorite song (and what appears to be the uncontested standout track) is “Redondel,” which I have posted above. But, the whole album is amazing – it’s dreamy, drippy, drooly, and pretty darn immaculate.

The the dirty, raw, garage punk of Los Culos lives up to their name. On Saturday they will let rip (tee-hee) their new album, Vol. II, (the joke is that there is no Vol. I) which is currently available on Spotify. At this show, a communion of love, fun, and freedom, the birth of a new album will be celebrated, and Los Culos plan to play their entire discography live for the first time. They will be accompanied by opening bands Camionero and Unión Soviética. Fun fact: you get a two tickets for the price of one if you wear a red T-shirt!

Celebrating Lisa! At this event there will be music from Liza Casullo and Mora Riel (who constitutes one half of the dream rock duo Riel). There also will be a DJ, live poetry readings, a whole gang of art exhibitions, live drawing, and an artisan fair.

Indie Hoy is celebrating one decade of being at the forefront of coverage of the emergent independent arts scene in Buenos Aires. For this big event, they’ve booked an epic line-up which will include LOUTA, Peces Raros, El Principe Idiota, Gativideo, and Tani (featured above). Tickets can be ordered online at this link.