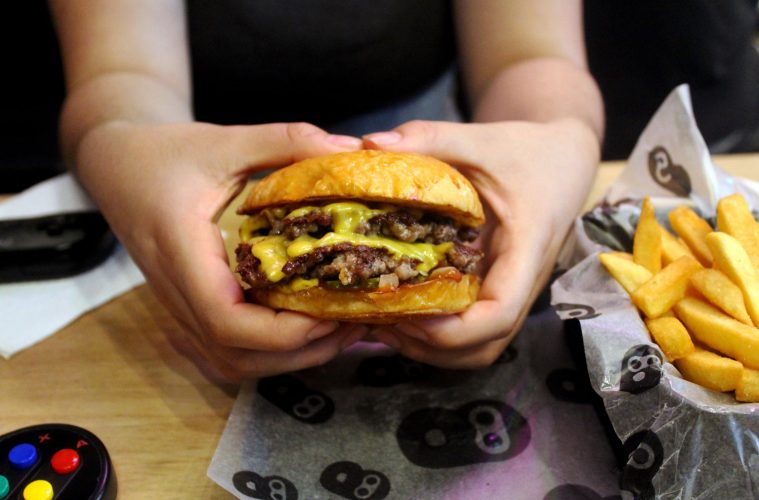 Mammoth-sized cheeseburgers floating in zero gravity bounce around a set of glossy television screens. Cheese melts downward and hangs onto the caramelized patties with strips of bacon, translucent green pickles and a mess of lettuce squeezing their way into view. Smoke sizzles loudly across the large flat top grill and a dozen fry cooks, servers and dishwashers scramble amongst the controlled chaos of the open kitchen.  Half a dozen tables set up with gaming consoles with nearly 20,000 old-school video games to choose from are filled with customers stealing bites and sipping on circus sized beer glasses between rounds of Mortal Kombat.

We are at Burgertify, the wildly popular little burger shack that in just under a year of existence has opened their second location. Both rest in the heart of burger country—Soho and Hollywood —where it seems like there is a cheeseburger every twenty meters. I can’t count how many times I have eaten here and am still not entirely sure how to pronounce the name. Nor am I meta enough to get the 8-bit video game reference the -tify refers to if it refers to a game at all. I don’t care either, because the gimmick is just the opening credits.

A good burger isn’t about making the most outlandish: it’s about the tear and crunch of a fresh piece of lettuce, the perfect char that settles around the craters of the patty, gooey cheese that oozes onto the paper to be scooped up by fries, a juicy bite that doesn’t come from ladles of ketchup and mayo but rather the burger’s own pink grease and a bun that is able to withstand it all.

Unless you pay close attention it is hard to tell the difference between their nearly dozen burgers. And in a city that went from zero burger shops to far too many in five short years, it is a sight for sore eyes. Absent are the bougie blue cheese and sun-dried tomato combos. No pineapples or hot sauce, either. While many try to stand out by bombing their menus with unusual ingredients, the best burger joints are the ones that elevate the classics. 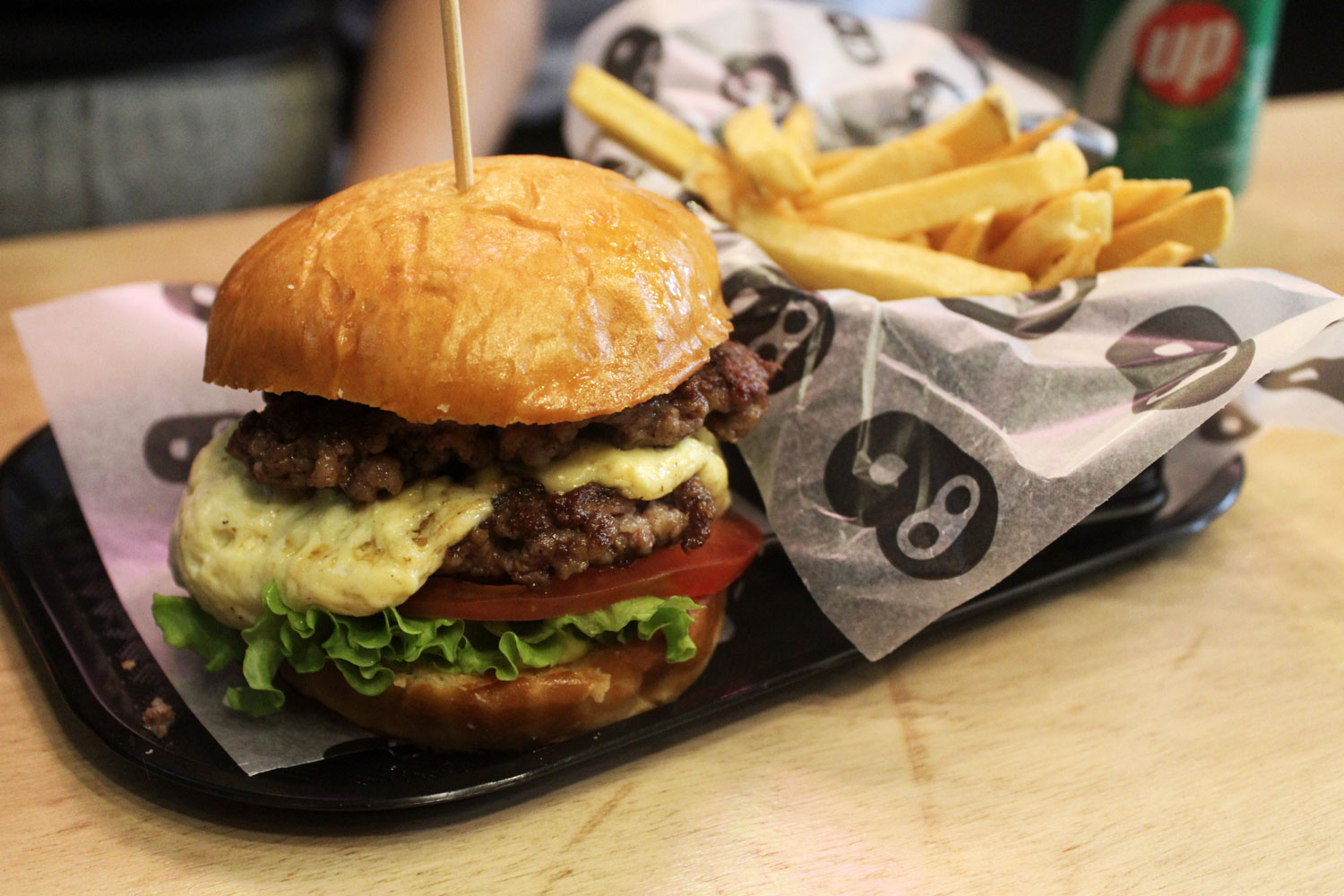 Here burgers take shape with carefully curated references: fast food style shredded iceberg or wavy backyard barbecue loose leaf? Home style bread and butter pickles or the special sauce with hidden vinegary squares? Traditional yellow cheese or fresh queso palmita? Burgers are smashed thin and always come in twos. Despite a few lapses to the rules—there is a guac and pico de gallo burger and another with a fried mozzarella square—the best combos err on the gluttonous tried and true.

Like the NES, two patties, extra cheese, bacon and barbecue sauce or the Game Over, which adds sour pickles, lettuce and a McDonald’s style secret sauce. I prefer the latter with its extra kick of vinegar from the pickles and secret sauce. The Jefe Final comes with creamy white palmita cheese, a Venezuelan import that spills over onto your fingers and drips on top of the fries. The Tanooki pays homage to a quarter pounder with cheese with a delightful spoonful of mustard across tiny squares of raw onion and pops of pickle. For the adventurous, the pornographic Donkey Donut are two patties stacked between a glazed donut. The sweetness of the glaze pops in and out of focus but never takes center stage. It plays well with crispy bacon and brushes off onto the french fries—which are not quite shoestring and not quite steak but always just the right balance between crunchy and a starchy soft inner glow. 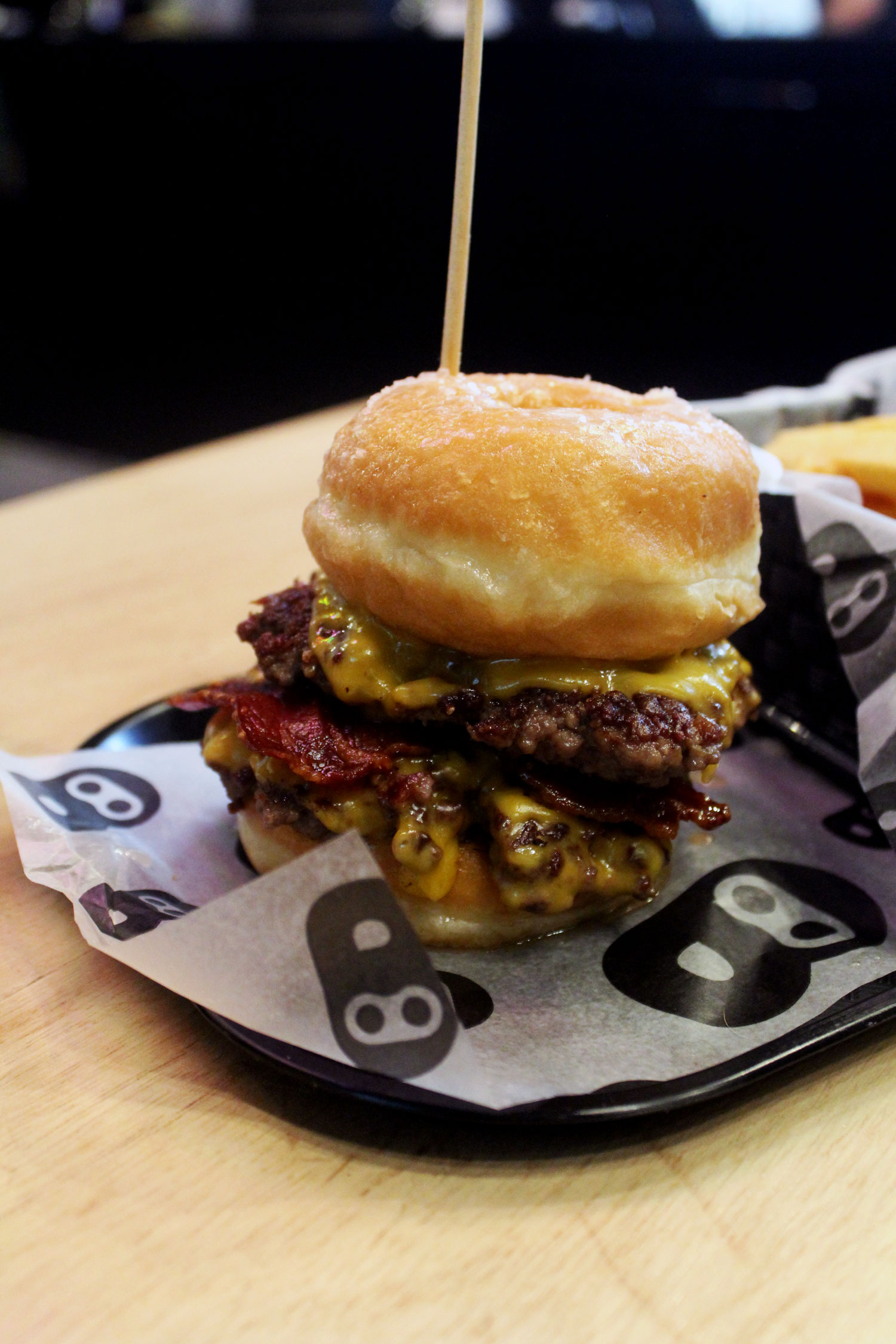 Beers are strictly Patagonia, kind of a buzz kill, but still enough to wash down a heart burger or two whilst camping out for a impromptu Mario Kart tournament.

Open: Tuesday through Sunday from noon to 4pm and 8pm to midnight