Sometimes I’ll talk about their enchanting blend of dreamy, dusted-petal, folk-inspired melodies with hard-hitting guitar rock. Sometimes I’ll mention their new-agey, world-music, tribal-chant leanings. Other times I’ll talk about the peaks and valleys of drama that make up their 2016 self-titled debut album. I’ll make sure to mention singer Carolina Merlo‘s voice, which anchors the album and brings passion, urgency and sweetness to the stately, lushly-orchestrated cuts therein.  But somehow, none of those descriptions ever really feel like they adequately capture the band’s sound.

The best way to get a sense of what Fly Fly Caroline sound like is by listening to their album, which thankfully you can do on Spotify, iTunes, or the Youtube video embedded below.

Whatever description you choose to use, the fact remains that Fly Fly Caroline have one of the most unique and fully-realized sounds of contemporary Argentinian music. They won me over the moment I heard the crashing cymbal splashes in “La Soledad” signal the shift from its melancholy verses to its grand, beautifully dramatic chorus, which manages to resonate emotionally while also being made up entirely of a single word: “nada”.

The band has been playing relentlessly for the last several months, and recently participated in the Buenos Aires Ciudad Emergente Festival. I caught up with Gabriel Merlo, the band’s drummer, shortly after their performance. We discussed the music scenes in both Buenos Aires and Cordoba, the band’s songwriting process, and their upcoming sophomore effort. 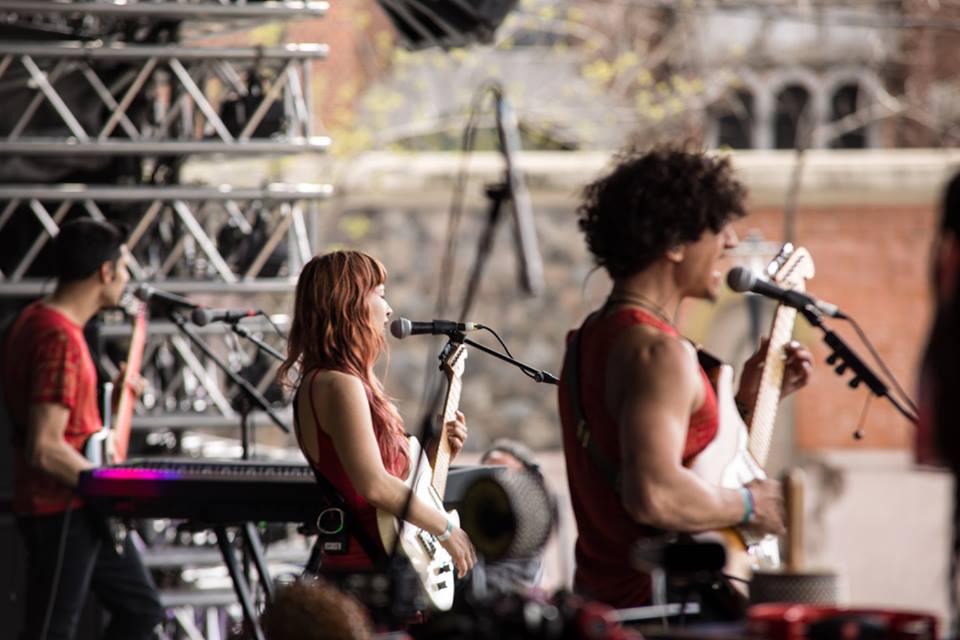 How has the Ciudad Emergente experience been?

Tremendous. We were blown away both by the organization and the audience response. We’ve met a number of amazing people and had a great time. We are very thankful.

Are there similar events in Cordoba, where you’re from?

Not of this size or scope, because clearly Buenos Aires is a lot bigger. But there are some very nice festivals and support for the arts.

I’ve seen the band perform a couple of times– once at the Centro Cultural Kirchner and another time at Elefante en la Habitación’s FestiEH. Is it very different playing in Buenos Aires?

Any time you get the chance to travel outside of your home base is good. It makes you vibrate differently. We love playing in Cordoba, it is a wonderful experience, but it is inherently different when you step outside of that. It is also sometimes more vulnerable. Luckily, every time we’ve come to Buenos Aires it’s been a tremendously positive experience. We are lucky to know people like Elefante en La Habitación, who put so much heart into their work. We are treated very well, we meet wonderful people, and that comes out in our performances. We enjoy traveling, exploring, opening our music up to the world. It creates a very positive effect in the music down the line.

I think it’s fair to say that Buenos Aires is experiencing a sort of golden age of independent music. The underground scene is incredibly active and creative. Is there a similar scene in Cordoba?

How long has the band been around?

We’ve been playing together for six years. The current lineup of five members have been playing together since 2012. My sister Caro and I come from a family of musicians. She started writing songs in 2009 along with Manolo Lagos, our lead guitarist. Soon they were joined by Fernando Uñates on the percussion. I was her little brother who was always tagging along, and eventually I joined on the drums. Eventually Nicolás, whom we knew from studying music, joined on the bass, and that’s been the lineup ever since. 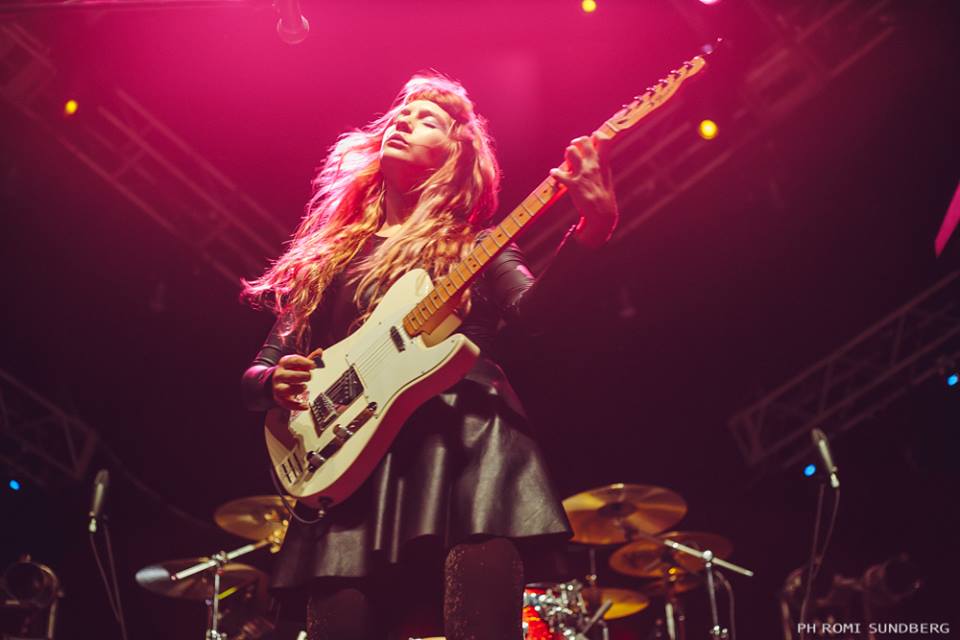 What is your songwriting process? Do you all write together?

The songs on our first album were mostly written by Caro. Caro will bring a song to the group and then we will all contribute to the arrangements. Each one of us, aside from playing our instruments, also thinks very much like an arranger, like a producer. We’ve settled into an approach to arrangements that creates the ‘Fly Fly Caroline’ trademark sound. It’s also the combination of all our different musical backgrounds. Caro and I come from a classical background, and always try to inject a sort of “world music” feel to the songs. Some of us come from a jazz background, others from progressive rock. That clash of sounds comes out in our songs.

I have to say, as far as production and arrangements go, your debut is incredibly impressive. It is so lush and dynamic.

Thank you. We worked with a very important producer called José Gabriel Gentile, who taught us a lot. He’s worked in Los Angeles and in Buenos Aires. It was an amazing experience. In fact, our second album will also be produced by him. He has a lot of music in his mind. He steered us towards a tighter, cleaner, simpler sound in some regards. He pushed us towards thinking about the message we wanted to convey with each song, and approaching the sequencing almost as a story. The order of the tracks is very important, they weren’t picked just because. We picked those songs out of 30 that we had available.

I hear an interesting contrast between this dreamy, vaguely psychedelic sound and your more hard-rocking side. Is this something you made a conscious choice to do, or was it just how your sound naturally evolved?

Interestingly, a bit of both. Caro’s compositions– she comes from both a classical background and a very punk and grunge influenced upbringing. So we both listened to a lot of Soundgarden and Alice in Chains, but also things like Björk, Radiohead and Sigur Rós. So we have this duality in the search for beauty, open sounds, and then also our darker, more aggressive side. We are very drawn to the rawness, which can come from a sound but also from emotion. So this comes out naturally in our music, but it is also something that we put a lot of effort toward capturing correctly. We want to make our audience’s ears perk up. We want to really grab them, and sometimes that requires a very strong contrast, or an unexpected element.

You are currently working on a new album. When you look back on your first album, which came out two years ago, do you still feel like it represents you?

Totally. It is very “us.” And it always will be. I think we did a good job of presenting ourselves on that album. That’s why we worked on it so hard. It took us two years to record. Of course, we grow as artists, and our energy is ever evolving. We are older and wiser now. So while the new album will naturally be different, I think that first one is a great snapshot in time. It’s still very much us. The songs are a bit more hard-hitting. Some of them are a little more straightforward. We try to capture our maturity and current context as best as we can. Caro is incredibly perceptive, and her songwriting captures the emotional truth of our lives very well, so that will certainly be reflected in the new album.

How far along is it? Are you recording? Writing songs?

We’ve written many songs. We’ve been working out the arrangements of them. We have about 15 songs so far, but we’re still very much in a “pre-production” stage. We are figuring out how they’ll sound, and what approach they’ll take. There are a few older songs that we are revisiting and reworking. “Esfera” and “Sentidos Invertidos” are two songs that we wrote for our first album, but they weren’t included in the final track list. We are going to be updating them and including them in the new one. But there are also a lot of new songs that have a very different feel. We’ve been working them out at what we call the “Fly House,” which is our space in Cordoba where we have a home studio as well as a rehearsal room. We all work and teach there. It’s been great to have that space. It’s really changed our approach to songwriting. It’s also cemented our individual roles in the band, which we didn’t really have before. Now we each take care of a different side of our organization, which adds to our dynamic and makes things easier.

There seems to be an increasing pressure within the indie community towards a homogenization of sound, towards of crafting a crossover pop hit at expense of artistic identity. Is this something you feel?

We don’t feel any pressure from anybody. We are learning from what surrounds us and feeling out where our music is headed. We think it is incredibly important to be sincere in our music. We love pop music. There are several songs in our first album, like “Tantas Veces,” that are straight-up pop songs. And there will be songs in our next album that are similarly poppy. But we are under no pressure but our own. One does sometimes listen to the radio and ask, “Why am I not being played?” You know, “Why am I not on that Spotify playlist?” I don’t think there’s anything wrong with wanting to connect with a larger audience, but it is incredibly important for us to be true to ourselves and the music that flows out of us.

As you know, Argentina is currently undergoing a severe economic crisis. How do you see that affecting your work or the scene you’re a part of?

This is something Caro and I were discussing yesterday. Music will always have its continuity, in spite of the situation the country faces. But the truth of the matter is, yes, it absolutely affects us. Art is affected because, during a crisis, priorities shift. Mainstream music will continue to exist, but the underground scene is a lot more fragile, and needs support. There is this triangle of sorts… the audience, the space, and the artist. They need to be in balance with each other for this to work. But even when they’re not, you keep pushing on. Art is an invaluable resource, and acts as a mirror to whatever situation the country might be undergoing. It is a role that should be taken seriously. And we do.

What are the band’s immediate plans?

We’ll be coming back to Buenos Aires before the end of the year. Soon, we’ll be headed out to Rosario for a show, and we are looking into playing more around Cordoba in the next couple of months. And then we will dive head-first into the next album. We are very happy with our work. It’s been a great year for Fly Fly Caroline. We are learning and growing and feeding off of each other’s good vibes. It’s been wonderful.