Capturing Truth One Photograph at a Time With Adri Godis

Although there’s a good chance that egotistical romanticism will end up being a necessary evil for the survival of honest art in our Fake News, post-fact, Macrisis world, don’t tell that to Adri Godis – she doesn’t care for egos. Having dedicated the past ten years of her life to living vicariously through the lens of her Canon, capturing intimate portraits of artists and unknowns of a wide variety, she’s seen the world as it exists when the fluff is stripped away: vulnerable, bare, and pure.

From the famous, to the nameless, to the inanimate, she has shot it all with a single, solitary demand – truth. Intrigued by both the depth and breadth of her work, we stopped by her Palermo apartment for an intimate (and mate-fueled) look into the life and mind of an artist who lives for that rare, adrenaline-driven moment right before the capture, where we are left with no choice but to lower our defenses.

Adri, let’s start with some background information for people who may not be familiar with your work. Give me the “who” and the “what” of your art.

I’m a professional photographer with 10 years of experience working in and around greater Buenos Aires. I studied modern art and have been taking pictures since I was 18. Currently, I’m working on a number of different projects: I provide free workshops in collaboration with the city of Buenos Aires, I work for a number of magazines taking pictures of events and interviewees, and I have my own projects/interests relating to portraits and urban photography.

Do you come from a family of artists or photographers?

No, not exactly. My father was always taking pictures of us in the house, at family events, but he did it as a hobby and because he truly loved it. He used to take pictures all the time, but I never really saw it as art, it was simply a part of family life. When I decided to become a photographer, he let me borrow his analog camera before giving it to me as a gift when I became serious. 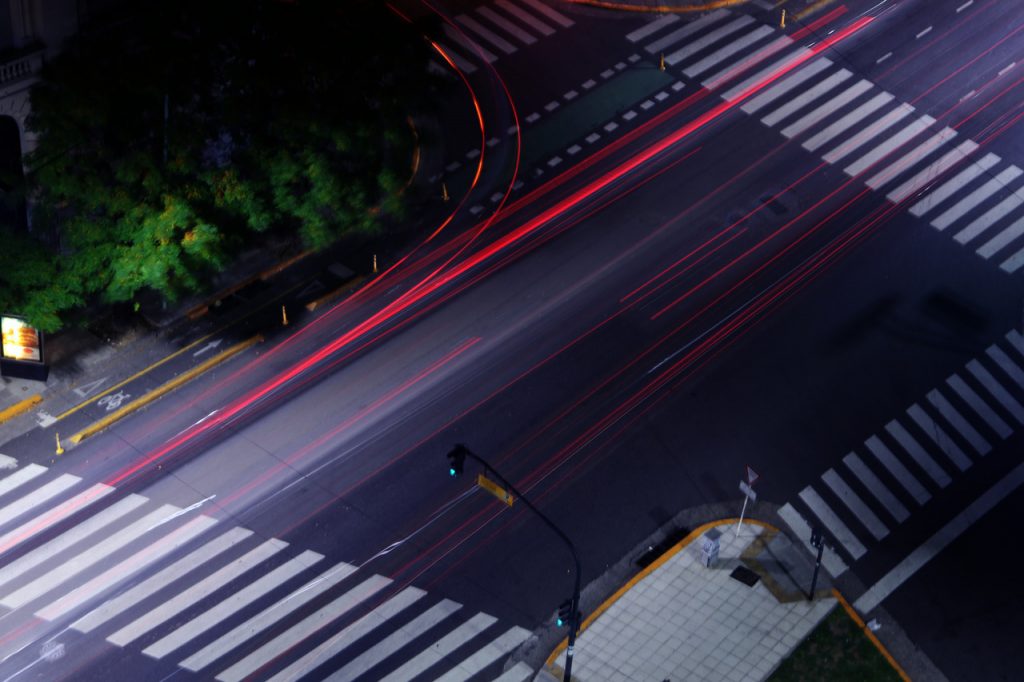 Did your family support your decision to study art?

To some degree yes. I think they were simply happy that I was actually studying anything at all (laughs). The truth is, I was a disaster as a child. I attended five different primary schools and I hated studying. Although they may have preferred another career choice they were happy that I decided to do something, anything really. When I first started working professionally my parents were living in Ecuador. They lived there for 20 years and only moved back to Buenos Aires four years ago. So, for all that time, they never came to see any of my exhibitions or my art. Now that they are living here every little thing I do they attend (laughs)… it doesn’t matter if it’s a small talk or big exhibition. I used to think that they didn’t understand me, but I realized much later that the distance between us had simply built a wall. Now, whatever I do, they support me.

Tell me about Proyecto Luminiscencia. I understand that it’s your longest-running project.

This is a project that I started in 2012 as my first professional solo portrait project. With the benefit of hindsight, I can now say that it’s directly linked with the notion of “art.” However, at the time I started it, I didn’t know what it was going to be. I began taking portraits of street artists because they were the easiest to access. It appealed to me because of the intimate moments I was sharing with fellow artists. It doesn’t matter how commercially successful you are as an artist, when I put the camera on you I see you as the human that you are. You remember that you want to look pretty or handsome… that you are insecure. You become more human, and that’s what won me over. As an artist, you lose yourself in that moment. That’s why it’s called Proyecto Luminiscencia, for the light I see in you at that moment.

How has the project changed over the years?

The project began with a vision of taking portraits of unknown subjects, but it quickly manifested as something else. Unknown subjects soon became known to me, and I realized that as the project evolved, I had to evolve too. 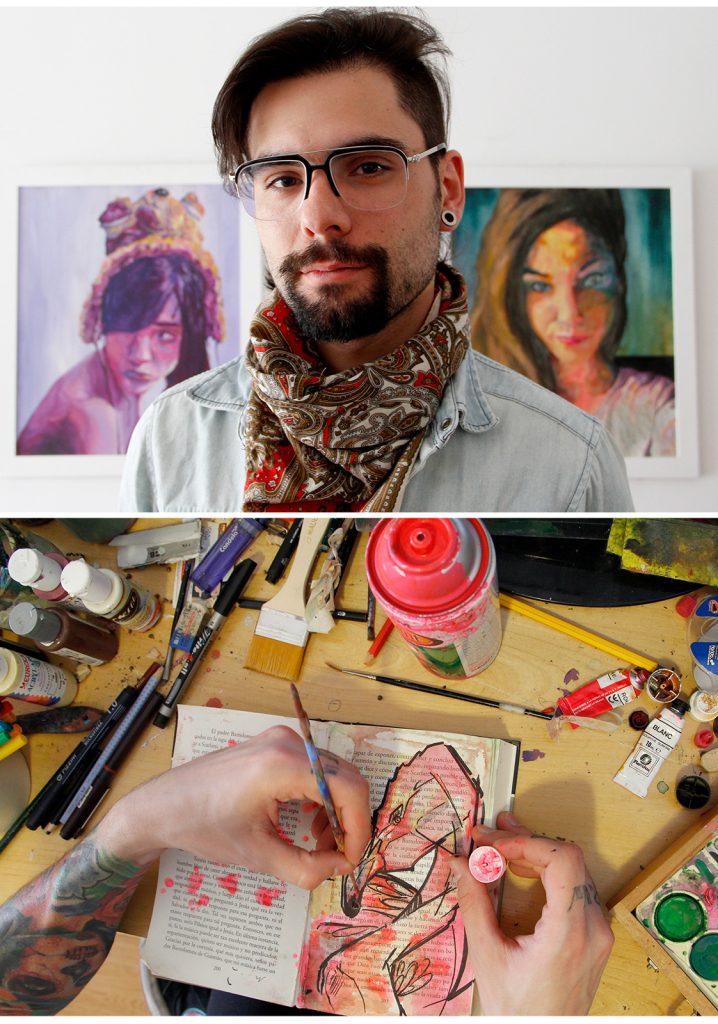 Was that change hard to deal with?

It was difficult in the sense that I had to embrace the insecurity of not knowing what would happen with the project. I knew it was going to be a long-term project, one of years, not months. However, after a few years of rapid growth, I had to lose my ego to some degree. I had to ask myself the hard question: Who am I? I realized that, at least in this specific project, I’m no one. I just take pictures. Now, after seven years and a number of evolutions, I feel comfortable finishing it for good.

How many artists have you photographed?

Almost 80, but there are a few more I would like to photograph before calling it a day.

What will come of the project?

The idea is to publish a book, one that everyone can take with them on their adventures throughout the world… a book to look at in 30 years like we marvel at the photographs from the 1970’s. It’s this idea of nostalgic value that continues to motivate me today.

Many of your subjects in this project are street artists. Do you see a connection between your art and street art?

First, I think it’s important to recognize that this isn’t a project just about street art, but art generally. The project includes artists of all types, from muralists to pianists. To answer your question, I think there are some similarities, but mostly the concept is different. For me, my work isn’t purely ephemeral. I take a picture and years later it could still exist. What’s ephemeral, however, is the contact that I have with my subjects; the things that you don’t see in the pictures. The shame, the fear, the many complications of life… all of the adjectives that I would never use to describe a beautiful photograph, they manifest in the intimate moments I have with my subjects. Photography for me, much like street art for many artists, is a way to bridge the solitary gap that exists between me and the people. It breaks barriers.

Yes. When it comes to those who create, you cannot separate one from the other. For me, the act of creation is deeply bonded with one’s hands. A face may only be a face, and hands only hands, but united, you begin to intimately understand one’s work.

Tell me about your other ongoing project, Vulnerable a lo Extraño

This project is one that has illuminated my life. It focuses on portraits of subjects completely unknown to me before shooting. I don’t know anything about them, and they don’t know anything about me. It’s called Vulnerable a lo Extraño because the subjects must place their trust in me, in a stranger. I say where to sit, how to stand, when to look. To not know me and yet still have that trust… it’s something special. Eventually, we get to know each other intimately after our session, but that only comes after being vulnerable.

Who are your artistic inspirations?

It depends on the moment in which you find me. For example, Vulnerable a lo Extraño was inspired by the photographer Ryan Pfluger. In a recent Ted Talk, he discussed his early social struggles with both his family and strangers, and how he used photography as a tool to develop intimate relationships. When I heard this, I developed the idea for my own project. But aside from that example, it’s what I see in daily life that motivates me most… the things that change depending on where I am and what I’m doing.

To close, have you learned anything about the “human condition” in your ten years taking portraits?

Check out Adri’s Instagram to stay up-to-date on her latest projects!