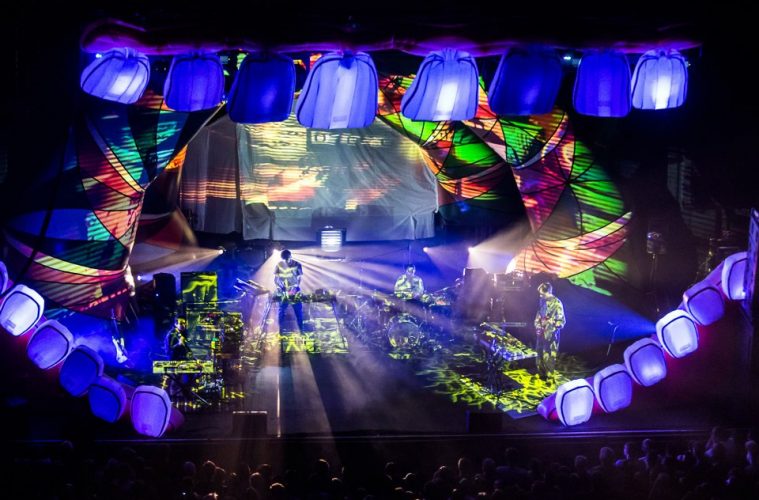 Well, dear readers, August is almost over. It got a little dodgy there for a while – we at La La Lista spent many grey mornings this past month clutching our coffee mugs, repeating our mantra (we can’t tell you what it is, IT’S PRIVATE), and yearning for just the slightest hint that spring was coming, and that this melancholy limbo that passes for winter was coming to an end.

And today, we have it. It is an absolutely gorgeous day outside, and there are so many amazing bands to go see this week, from bigger international acts to some of our latest favorite discoveries.

We at La La Lista have mixed feelings about Father John Misty. On one hand, he wrote an extremely beautiful pop record about being in love that several of us adored.  On the other hand, he. is. the. worst. But if you still desperately want to see him live and have him lecture you and the other sheeple between sets about how we’re all hurtling towards the end of the world and he’s the only white dude woke enough to notice, well, be our guest. Tickets will only run you a billion pesos.

If you’re not willing to plop down the cash for FJM, you can still catch some great live music on Wednesday night. Curated by Seba Rubin (of tribute band Los Campos Magneticos fame), the Indie de Miercoles concert series showcases the best in local up-and-coming local talent. In this edition, debuting solo musician Laura Farias and experimental duo Los Mentalistas will be playing a double set that’s sure to fix what ails ya.

Rabbit or a habit, habit or a rib? Ok, we are REALLY excited about this one folks. The experimental pop collective returns to Buenos Aires for the first time in over a decade, and will be treating their patient fans to a live performance of their whimsical and much beloved Sung Tongs. Bring a friend and those edibles you’ve been saving in the fridge – this is the wonderfully weird singalong you’ve been waiting for.

I’ve said this before and I will say it again – Altocamet’s Atrapando Rayos was one of the most overlooked local releases of 2017 (it’s hard being an Argentine indie band releasing anything the same year as El Mato). If you haven’t given it a listen yet, there’s no better time than right now, in preparation for their show at La Tangente. They will be joined by angular psych-rock band OK Piramides, who my snobbiest music friend recently confided “were pretty great live, actually.”

Australian electronic music band Cut / Copy return to Argentina to present their unique blend of rock and dance music on the stage of Niceto Club.

Festival Entei is here for its first edition ever, featuring a killer lineup and tons of independent DIY art. Playing live will be post punk band Dynammo, dream pop act Parque de Atracciones, dream punk outfit Laika Vive, and a solo set by indie singer-songwriter Rodrigo Armando. In addition, there will be a DJ set by Rey Hindu and several art expos.

Psychedelic rockers Perro Zen, noise folk outfit Los Aullidos, and lo-fi dream pop act Mordando Pasto Rulero are three great bands and kindred spirits that will be doing what they do they best on the stage of Roseti, much to the delight of the audience.

Instrumental four-piece band Hijos Amigos and bluesy psychedelic rock trio Madre will be playing a live show at La Comunidad del Sótano, after which you can stay and move those tired feet with a DJ set by DJ Elmo Lesto.

Noise rock duo Riel (have you read our interview yet?) kraut-pop project Ex-Colorado, and indie powerhouse Atrás Hay Truenos will be rocking the living hell out of the stage of La Confitería in an electrifying night not for the faint of heart.

Bestia Bebé are playing a show at Niceto as part of their ongoing tour, La Gira Destructiva. The much-celebrated indie outfit will be accompanied by bluesy trio Las Armas Bs. As. and post rock combo La venganza de Cheetara.