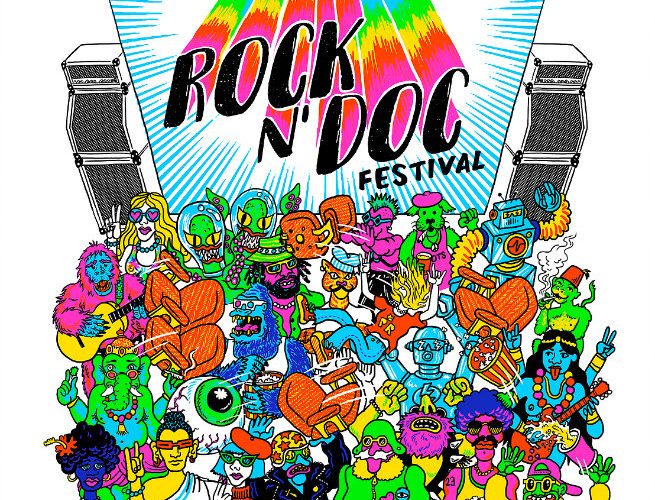 If you’re anything like us, you are a big fan of the spot where film and music converge. We’re not talking about movie musicals (though, honestly, we’re pretty big fans of those too); rather, the films that explore the story behind the bands, venues and songs that resonate for us. The common term for these is “rock docs,” the very best examples of which are poignant, powerful, exhilaratingly dramatic paeans to the art that moves us.

So imagine our delight when we heard the news that Buenos Aires was going to be hosting a film festival dedicated entirely to rock docs. The Rock n’ Doc Festival will be taking place from September 6th to the 12th at a single location: the Hoyts movie theater at the Abasto Shopping Mall (Av. Corrientes 3247), the same venue that served for many years as the home of the Buenos Aires International Independent Film Festival. Lots of memories of standing around those hallowed halls, festival catalogue gripped tight, waiting for the next screening of some obscure movie. We can’t wait to do it again.

The festival will also feature photography exhibits (Roberta Bayley’s The Ramones, del caos a la cultura will be shown at the Centro Cultural Borges, while Jim Saah’s In My Eyes will serve as a first-person recollection of the 1980s DC punk scene, and will be shown at famous punk venue Salón Pueyrredón. There will also be VR exhibits and live music events. You can find all the details of the festival and its surrounding events here. Meanwhile, we did what we do best: took a look at the lineup of films and picked out a few that we are familiar with and can wholeheartedly recommend.

There are a lot of stories out there that focus on songs and the people who make them. But one part of the equation that is often overlooked is the venue that hosts this music. Integral parts in shaping the narrative of our own lives, music venues are rich with history and meaning, and few are as significant as Cemento. The venerable Buenos Aires rockn’roll institution that is now, sadly, a parking lot. This documentary takes a look at the space that hosted hundreds of stories, and its place in the cultural history of the city.

Nowadays, “punk rock” and “feminism” feel like concepts that go hand-in-hand, both being revolutionary cultural movements aiming to subvert the status quo. But it wasn’t always like that: at several points in its history, the scene was brimming with male entitlement and toxic masculinity. It was largely thanks to people like Bikini Kill’s Kathleen Hanna — whose fascinating personal story is the focus to this documentary– that the scene was transformed and redefined into something more radical and inclusive.

A documentary that chronicles a particularly significant year in the young lives of the members of Unlocking The Truth, a heavy metal band made up of three young teenagers (we’re talking 13 year olds here!) as they make a name for themselves playing out in Times Square and honing their skills in public. A fascinating coming-of-age story about ambition, drive and artistic transformation.

One of the most fascinating aspects of music — and, actually, art in general– is how it can be used to chart the history of its country of origin. Since the early 90s, Babasonicos has been one of the most eclectic, creatively ambitious bands in the Argentinian rock scene; this documentary tells the story of Jessico, an album that was made and released during one of the most tumultuous times in Argentina’s political history. A fascinating retrospective.

Speaking of the confluence of music and politics. Matangi Maya MIA is an intimate and sometimes startlingly personal portrait of the always controversial Sri Lankan singer, with politics very much at the forefront of her personal history as an immigrant and subversive artist. An often moving documentary that serves as an artistic distillation of MIA’s persona and also touches on legacy, identity and artistic resilience.

I don’t know about you, but my personal exposure to Argentinian heavy metal is pretty much null. This is why films such as Relámpago en la Oscuridad, which tells the story of legendary heavy metal vocalist Alberto Zamarbide of V8 and Logos fame, is such a refreshing thing to watch; it exposes me to a vibrant, active scene that has been there all along, just completely hidden away from my own eyes. An iconic, highly influential figure in the heavy metal community, Zamarbide’s personal history serves as an entry point into this part of the country’s cultural legacy and this still bustling, vibrant subculture.

RUMBLE: The Indians Who Rocked the World

Speaking of perspectives that have been hidden from view. RUMBLE takes a look at one aspect of rock music that has been overlooked in just about every other retrospective: the influence of Native Americans on what we now know as rockn’roll. From Link Wray to Redbone to Randy Castillo, this documentary explores the meaning of “rock music,” and how its cultural makeup is even richer and more complex than we thought.

These are just a selection of documentaries we already know are worth seeing. There is a lot more on display at this festival. You can check out times, tickets and lineup information here.