Interview | On Stage With Tobogán Andaluz

La Sala Caras y Caretas 2037 is a proper theatre, with all the trimmings. It has the red upholstered seats, the thick black velvet curtain, the stage lights, the high-quality monitors. With the right band performing, it is an absolute joy to sit back and relax, perhaps with the occasional sip from the beer or flask hidden in your purse (not that I’m speaking from experience or anything), and take in a well-executed set from top to bottom.

However, if the band is ahem less than stellar, it’s going to be a miserable 45 minutes. There is no slouching into the patio for a smokey reprieve, no easy way to make faces at your friends as yet another tuneless yokel performs a weak Tom Waits impression. There is no escape.

Luckily for me, Tobogán Andaluz belong firmly to the former category. Although Caras y Caretas is clearly a sit-down venue,  the kids couldn’t help themselves  — jumping out of their seats to pogo up and down the aisles. Every show of theirs I have seen live has been like this, flawless, fun, and high energy. While the band’s talent as performers is undeniable, the pleasure of seeing them live is at least partially due to the quality of the songwriting. Their most recent album, Fuego en las Naves, more than earned its place on our Staff Picks of 2018 list through its nimble instrumentation and song-serving compositions.

To kick off another round of live shows throughout Latin America — the band is playing one last show  at CCK before leaving on tour this month  —  I talked with the band about inspiration, the writing and recording process, and what makes a great live show.

Why did you name yourselves ‘Tobogán Andaluz’? Where does it come from?

How would you describe your songwriting process? How has it changed over the last 8 years?

At first, Facu wrote the songs and Fede added the bass lines. In the last couple of years that has changed a bit – now Facu comes up with a couple of chords and we all build upon that in the rehearsal room. Our way of writing has opened up a little. 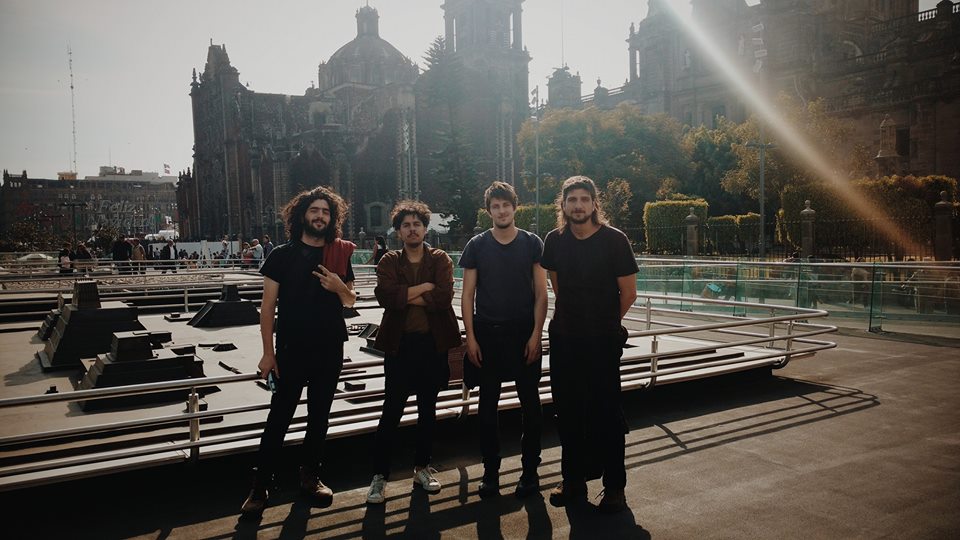 I know that Fuego en las Naves was a different recording process than usual, with a producer and the accompanying HiFi sound – obviously that makes the recording process easier in certain ways, but yet this album took over a year to complete. Tell me a bit about that.

This is the first album that we recorded with a producer. That meant having a studio at our disposal for as long as we wanted – we experimented a lot with the gear there. Diego Acosta produced the album – we had already worked with him on our last single and the experience was great, so we decided to work together on this one. We even became friends in the process and went on several tours with him. The recording process took a little bit longer because we kept coming up with stuff to bring to the table. Generally, the available time to record was during the night, so we had lovely recording sessions until 2 or 3 in the morning.

You guys are one of my favorite bands in the city to see live – you always sound confident and polished, and you interact well with the audience. Is this something that has come with time? Or did you always feel comfortable on stage?

Well, thanks! Playing live and having energetic live shows was always a part of Tobogán Andaluz. It improved a lot with time, but it was always the idea. The stage is the most comfortable place in the world for us; we have a lot of fun doing it.

Going hand in hand with that – what makes a great live show? What were the best live shows you’ve seen lately?

Hmmm. I think there’s many ways to do it, not just one. Generally, we try to transmit this contagious energy to the audience – we don’t want it to be something that goes unnoticed. We like to play long shows, because we know paying for a ticket is hard due to the economic situation. There are lots of people playing good live shows in Argentina – Atrás Hay Truenos has great live performances, for example. 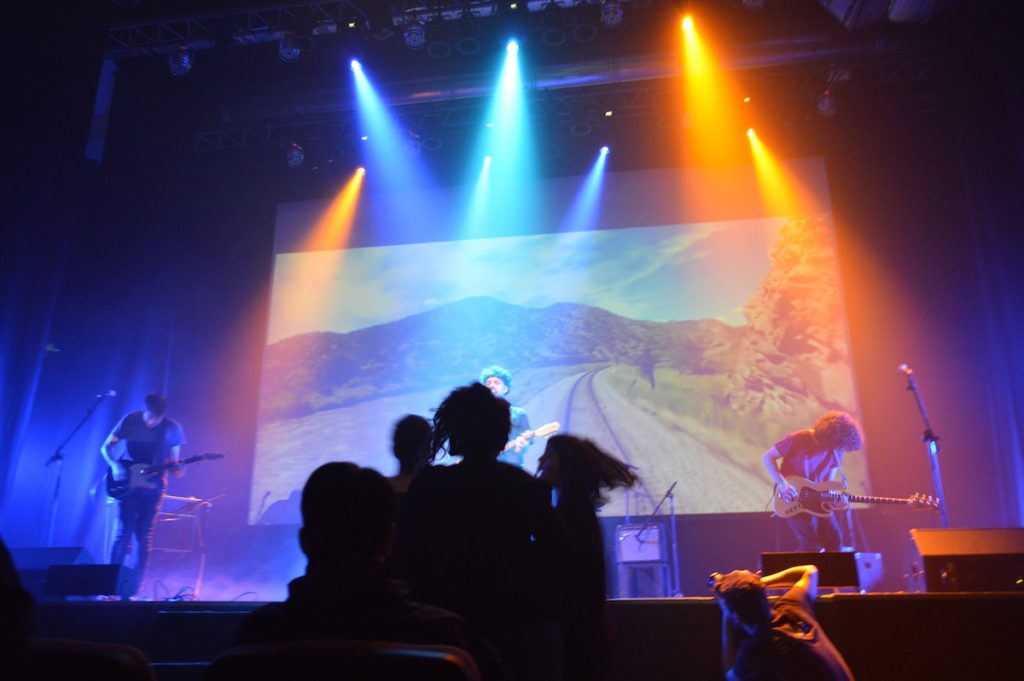 Tell me a bit about this upcoming tour abroad

It’s not closed 100%, but we’ll try to go back and play in Chile, Perú, and Uruguay, and Brazil for the first time, in addition to several Argentine provinces in what’s left of this year and the beginning of next year. We’re independent and we like to move around because we know that going on tour is exhausting but it’s the best thing that can happen to you as a musician – traveling, playing live, seeing new places thanks to music. In addition, our relationship as a band has gotten stronger thanks to all the tours we’ve done.

Who are your biggest musical influences?

That’s a hard one to answer, because we all listen to a lot of music and we have different tastes. I’d say punk is the common thread between us – The Clash, Joy Division, Loquero, but at the same time we like musicians like Bob Dylan, Talking Heads, or Charly García, which makes it all the more complicated to make a list of influences.

What things besides music inspire you to write songs?

What do you hope to achieve with your music?

I don’t know if this is something we’ve ever talked about, but we know we wanna keep making music and take this project as far as it can go. We have fun making music, but we’re aware that we’re super lucky to play and tour as much as we do, always meeting new people and all. That motivates us to not get too comfortable and keep trying.

Which do you think are the most interesting bands in the current scene? Which local bands are you listening to right now?

We like a lot of bands: Atrás Hay Truenos, El Príncipe Idiota, Los Besos, Viva Elástico, and a lot more.

What advice would you give to up-and-coming bands that are just starting?

Get a good live show, have fun playing live, and once you’ve gotten there, elaborate and transmit your message to the audience.

Tobogán Andaluz will be doing what they do best (for free!) at Centro Cultural Kirchner tomorrow night. Although all tickets have been distributed, there will be a small batch available at the venue at 6pm Saturday. 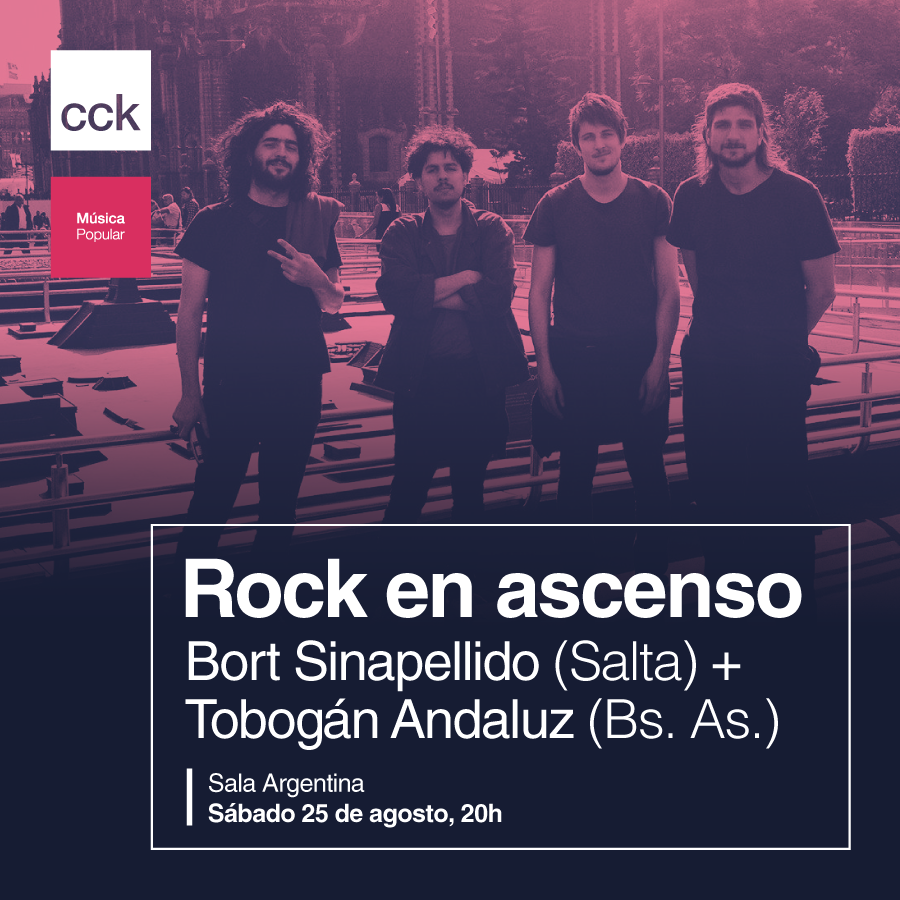