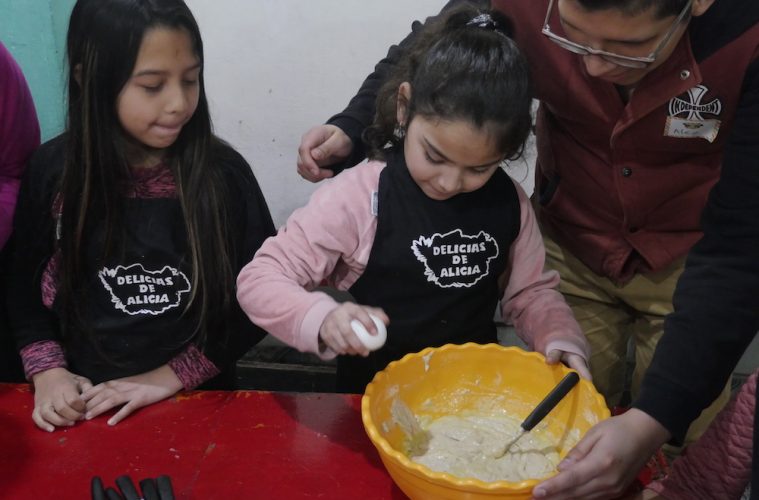 Meals that Matter: Behind the Scenes at Delicias de Alicia

Behind the scenes of a nonprofit here in Buenos Aires and how you can support it.
By Simone Teitelbaum

As soon we step off the bus in Barracas onto the avenue leading into Villa 21, we smell it. Sizzling chorizo, browning on grills somehow crafted out of old gas canisters. It’s early winter, and the morning’s still thawing, but people are out in spite of the cold. Because here, community is not something to be underestimated.

The buildings that line the avenue are made of brick and mortar, most of them only two stories high. Some lean slightly to one side, with laundry lines hanging between them as if they’re trying to pull the buildings closer together.

We tuck into a corner store, where the local verdulero greets us with his warm Paraguayan hospitality, as he does with everyone that comes by. We ask for the ingredients we need for today’s workshop while my eyes dart between the bunches of broccoli still tucked into their leaves and the pounds and pounds of sweet potatoes that sit in an old shopping cart waiting to be chopped, grilled, and consumed. With filled bags, we find our way into the villa alongside some local street dogs. 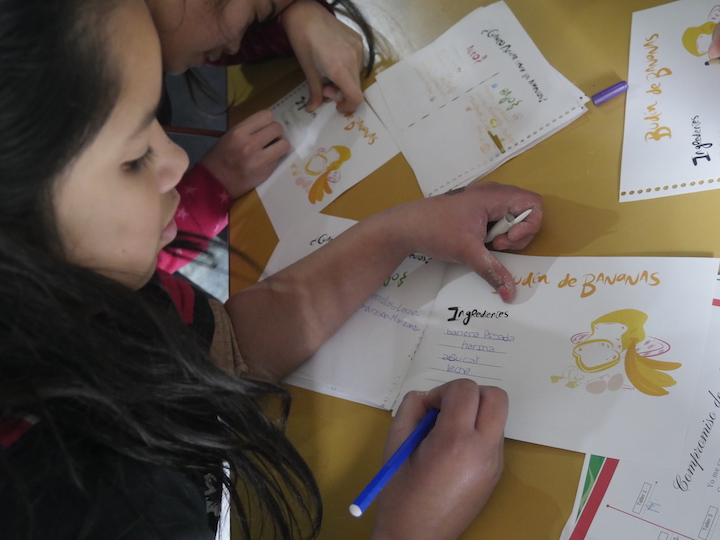 “MENOS SAL!” rings the chorus of niños huddled around communal tables in the Saturday morning sunlight, repeating what they learned in last week’s lesson. A little one wrapped in her apron tugs at my pant seam, peers up at me, and proudly states, “Simona, I drink eight glasses of water PER DAY.”

This is the type of bragging I hear as a volunteer at Delicias de Alicia, a social project that provides cooking and nutrition workshops to kids in underserved communities throughout Buenos Aires.

In the turquoise-walled NGO space in Villa 21 where the workshops are currently held, 25 local kids from the community stand—or rather squirm—in anticipation of what they’ll be cooking that day. Two of them are in a fiery debate about whether the fruit salad from workshop two or the veggie pasta from week three tasted better. The rest of the kids look towards Alicia, the founder of Delicias de Alicia and workshop instructor, as she begins to break down the concept of a colorful, balanced plate.

Born and bred in England, Alicia is a badass of a woman who has roots in the worlds of both cooking and volunteering. Unsatisfied with the lack of hands-on work in London’s NGO sector, she ventured from Mexico to Argentina by bus, making her way down the continent as a volunteer. Somehow, no matter what type of volunteer work she intended on doing, she found herself working in food and nutrition.

“I started running workshops with the women in a community in Guatemala where I would teach them how to make really simple pizza recipes. It gave them something that they could then sell, which gave them their own income separate from their husbands,” she told me.

Upon arriving in Argentina, she started volunteering in La Matanza, the poorest district of the Buenos Aires Province where over 40% of the population live below the poverty line. She was struck by the amount of sugar, soda, and highly processed food in the kids’ lunches, along with the lack of the most basic nutritional knowledge in the communities they served. She took action and began hosting weekly makeshift cooking workshops. 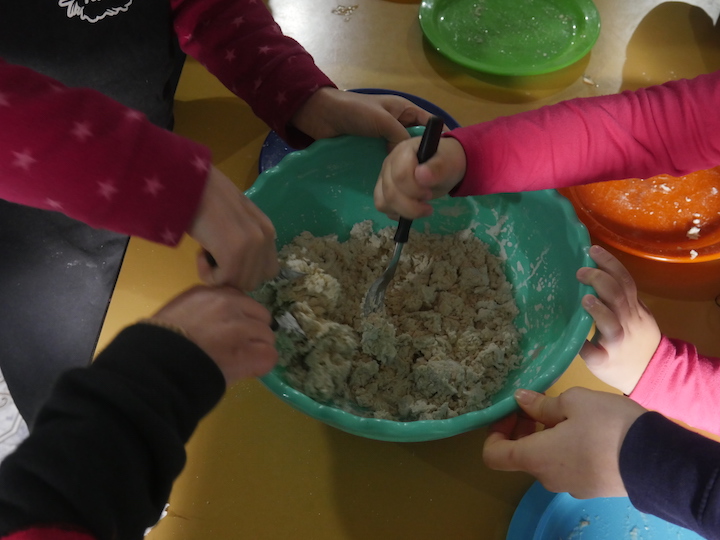 “Throughout a year of working with the kids, I learned the limits of what I could push and expect from them; how to challenge them but keep them open to learning. I realized that I wanted to find a way to give them tools to improve their own lives.”

From this, Delicias de Alicia, found its beginnings.

I remember hearing Alicia tell this story on the bus on the way to my first Saturday morning workshop as a volunteer. The way she spoke without pause made it clear that this project  was built on the combination of simple grit and the genuine desire to contribute where there is a need.

Over the past two years, many hands have helped it, guided it, and supported it. It’s striking how each Saturday there’s the same thick sense of community in this program she’s created. How the kids enter the classroom at ease—flinging off their oversized winter coats, reaching up to give cheek kisses to the instructors and volunteers, and begging to know what we’ll be cooking that day and why some of us have funny accents. You can see it in how they work together on fruit and veggie memory games, how the older ones help the younger ones cut the particularly tricky carrots, and how they all are constantly trying to figure out if the ingredients are spelled with ‘j’ or ‘g.’ You can see it at the end of the workshop, when the kids save extra fruit salad and banana bread for their baby siblings when their parents come to pick them up.

A couple years ago, in an effort to keep this community of kids growing, Alicia founded a puerta cerrada (closed door restaurant) with 100% of the profits going to fund the Saturday morning workshops. Once a month, under the high ceilings of a classic San Telmo home, 20 people sit around an old wooden communal table and share a homemade, fully vegetarian meal. Between courses, Alicia speaks about the project and the kids, with the intention that the space “creates a conversation. A platform where people can really talk, challenge their perceptions, and think.” The casual chatter you find in most restaurants is replaced here by warm talks of contribution, of a desire to help, of using privilege to do not only well, but good.

These conversations have become a go-to between us volunteers as well. We find ourselves talking about not only what the workshops give the kids, but what the kids give us in return. Juliana, a quick-to-laugh Columbian transplant, says, “Seeing the kids smile, that they like what they’re doing, that they’re interested, asking questions, that they really enjoy the cooking, this is the best part. It fills me.” Her partner Alejandro thinks, “It also gives them something to do on Saturdays, which is so important. We all come together and they really do have fun, cook, and enjoy. It feels like a game for them, which is exactly the idea, but they’re also truly learning.” 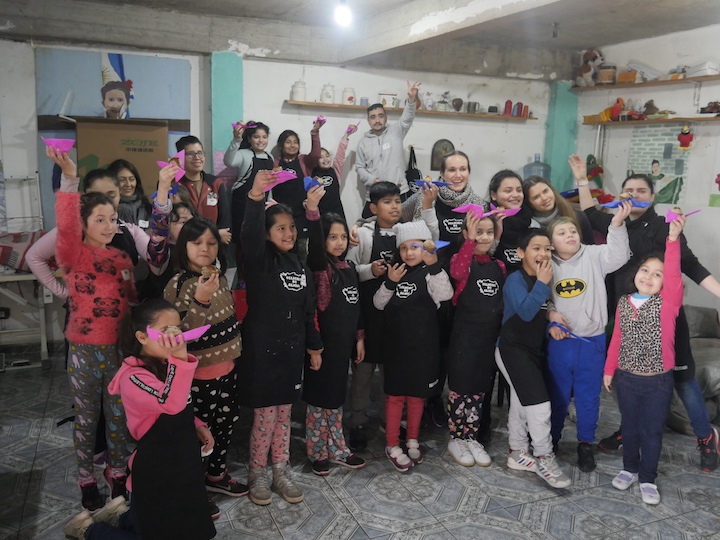 One of these Saturday mornings while waiting for all the kids to get picked up, Jazmin, a soft spoken 18-year-old Buenos Aires native studying nutrition who also volunteers, turned to me and said, “See? This is why it’s just worth it, even though for me that means traveling over two hours to come here. You can see the kids really take advantage of the opportunity, truly enjoy themselves, and it’s motivated me to keep being a volunteer despite the travel time. It’s something I really want to do, so I just get up and do it.”

Get up and do it, I thought as we walked out of the villa past echos of cumbia and fresh baked sopa paraguaya. Perhaps we could all use a bit more of that. 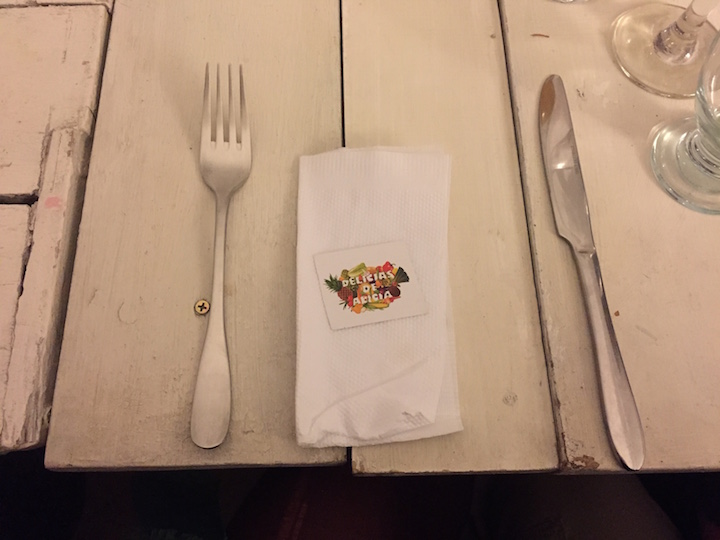 * If you’re keen on joining our team of volunteers, send an email to deliciasdealiciaba@gmail.com with your name, experience working with kids, and why you want to get involved.  You must be a confident Spanish speaker and available on Saturday mornings.

Delicias de Alicia now offers catering services in addition to the monthly dinners, in an effort to provide healthy, vegetarian meals for a larger audience and to move forward with the amount of kids we are able to reach.

If you’re interested in making a booking at the closed door restaurant or enquiring about a catered event, you can email DeliciasDeAliciaBA@gmail.com or call + 5491538313286.