My Night as Walter | The Big Lebowski Takes Buenos Aires 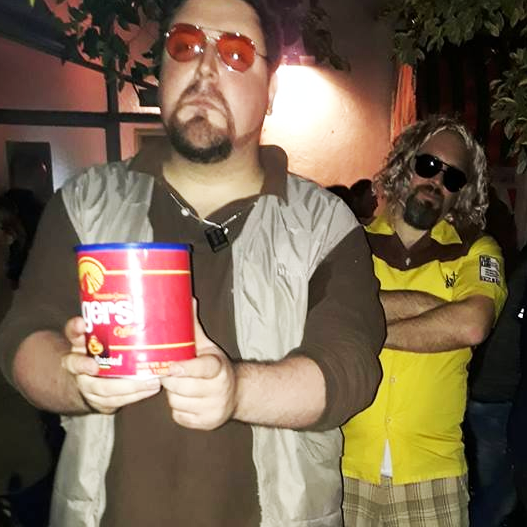 The first one of these caught me completely off-guard. Out of sheer instinct, I reacted by grabbing my phone and pulling it toward my face, as though I’d just been asked the time by a stranger in a street corner. It took me a few moments to realize that this young woman was indeed requesting to take a photo with me. With a bit of self-conscious reluctance, I sidled up beside her, adopted the tight-lipped mug I’d been practicing in front of the mirror all day, and faced the phone camera she’d extended above us at an angle.

It was the first of many selfies with strangers I took that night. I remember trying to make my way from one corner of the crowded bar to another and feeling the gaze of total strangers as they locked on me and elbowed the person next to them “look look look,” shortly before making their way over with the request. I thought about how this was a concentrated version of what the mega-famous, instantly-recognizable celebrity faces must endure every time they have to be out in public. Walk a few steps, stop, say hello, take photo. Walk some more steps, stop, say hello, take photo. It was excruciating.

I kind of loved it.

By 1 AM, I was facing a crowd of screaming, adoring fans. They hooted and hollered and applauded and chanted “Wal-ter! Wal-ter! Wal-ter!” as I stood before them, arms raised in victory. This was my moment of glory. I’d arrived.

…  Except, of course, that my name isn’t actually Walter, and strangers don’t actually stop me to take selfies together in my day-to-day life. The crowd wasn’t really cheering for me, but the character I was representing through the costume I had hastily put together, and the fact that I kind of look like John Goodman. You know, a young John Goodman. A more handsome John Goodman.

It was the inaugural installment of the Buenos Aires Lebowski Fest, a DIY fan event hosted at the venerable Almagro institution El Bar de Kowalski, celebrating the characters, music and drinks of the seminal late-nineties Coen Brothers masterpiece The Big Lebowski. More of an absurdist meditation on the folly of man than the harebrained slacker comedies of its time, the film tells the story of Jeffrey Lebowski – better known as The Dude, played with pitch-perfect slovenliness by Jeff Bridges – and his hot-headed and opinionated sidekick Walter Sobchak (John Goodman) as they, through a series of blunders and mishaps, become entangled in a bizarrely convoluted plot involving kidnapping, porn actors, a gang of militant nihilists, a stolen car, and bowling. If you’ve never seen the film, please do yourself a favor and seek it out. Its status as a cult classic is well deserved.

And it’s that kind of cult-like enthusiasm that inspired Agustin Ignacio Fernandez and Martin Campos – the resident bartender and cook at El Bar de Kowalski, respectively – to start a Buenos Aires version of Lebowski Fest. What started as a small, fan-driven event in Louisville, Kentucky has quickly developed into a global phenomenon, bringing thousands of ardent Lebowskiheads around the world together in their shared appreciation for this profoundly strange little film. While the official Lebowski Fest is still held every year in various US cities, its influence has spread all around the world, inspiring countless grassroots fan initiatives.

Though naturally smaller in scope, the inaugural Buenos Aires Lebowski Fest was a blast. White Russians were served, a virtual bowling station was set up, and the sounds of Bob Dylan’s “The Man in Me” and First Edition’s “Just Dropped In” blasted out of speakers as El Bar de Kowalski was overrun with people in Dude costumes.

“We envisioned it as a small event for 30 to 40 people, without really knowing how many fans we’d attract in Argentina,” Fernandez told us. “We reserved a small part of the bar to host it. The event spread so unexpectedly. The Facebook event reached 3500 people, which led us to expanding it to the entire bar.” 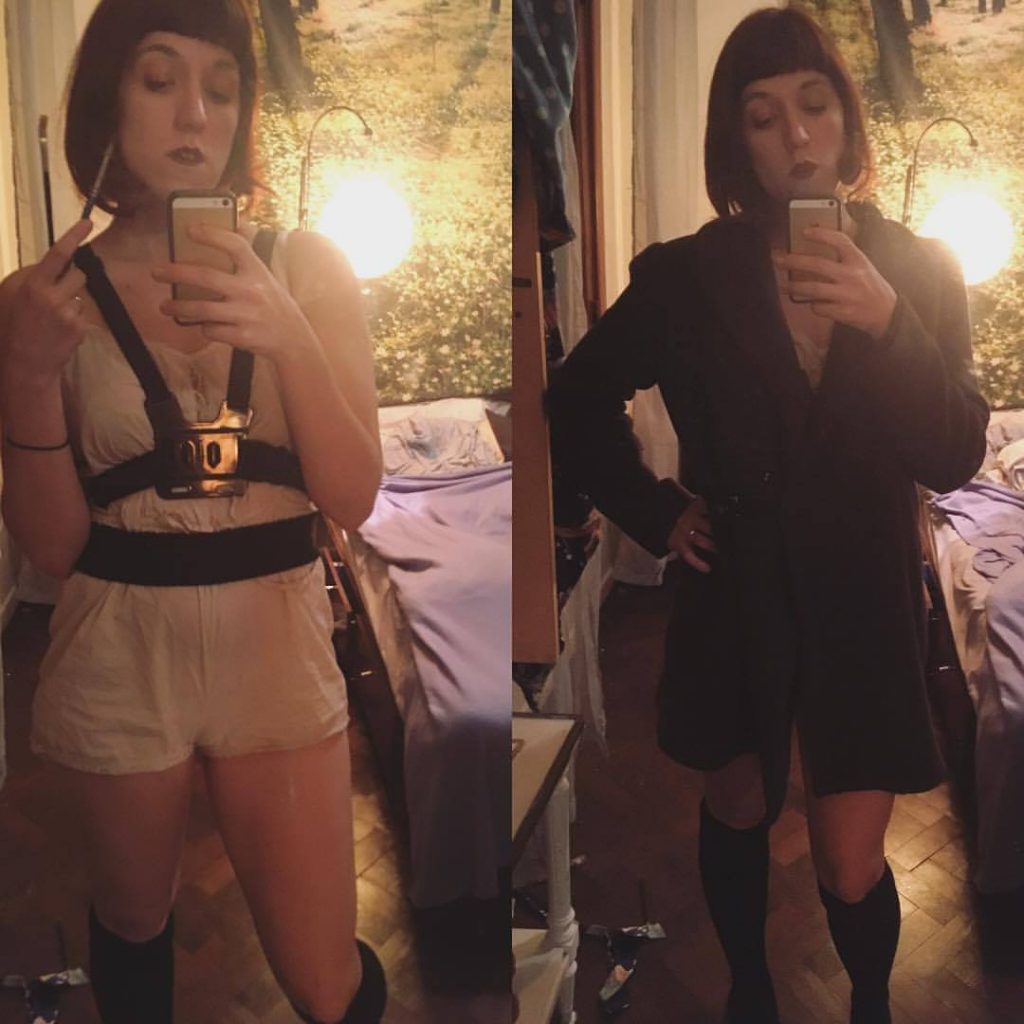 Myself and La La Lista editor-in-chief Evy Duskey were two of the people who caught wind of last year’s event. Being die-hard fans of both the film and of making complete asses out of ourselves, we immediately decided that we needed to participate in the most exciting aspect of the night: the cosplay competition. Evy went all out in her transformation into Julianne Moore’s character Maude Lebowski; she somehow contorted her long hair into a short bob, and put together an elaborate costume that combined two of Maude’s outfits in the film: the harness she straps herself onto in order to perform her high-flying art, and her iconic robe. It was like one of those old action figures that had two character costumes at once – like you’d press a button and all of a sudden the chest of your Batman figure would open up to reveal a hidden costume variant.

Me, I tore the sleeves off an old jacket, found a pair of broken aviator glasses, and bought a dog collar from a literal Pet Store to approximate Walter’s military tags. I knew that with these prodigious cheeks of mine, I wouldn’t need to do much work to evoke the spirit of Walter Sobchak.

But neither of us were dressed as the single most enduring character — the most quoted and most cosplayed character in the entire film. That is, of course, The Dude himself. A blissfully shiftless, perpetually unfazed layabout whose ambitions extend as far as listening to his Creedence tapes and participating in the local bowling tournament (note that we say “participating” – we have no indication that The Dude actually even wants to win the thing), The Dude exudes a calm, collected cool; fully cognizant of his own mediocrity, he is way past the point of living up to any sort of societal expectation. He is, in a very real sense, one of the most genuinely liberated characters in cinema history. As such, he defies many storytelling conventions; this is why so much of the film feels like a character coasting through plot points with bemused indifference, and why it ends with him almost completely unchanged.

I asked Agustin if he had any thoughts on why a perennially chill character like The Dude resonates with Argentine culture, which seems to swing pretty violently back-and-forth between the easy-going tranca mindset and the kind of pent-up neurosis that makes Buenos Aires the one of the most psychoanalyzed cities in the world: “I was talking about this with a friend, and he pointed out something very interesting: The Dude is like Homer Simpson, or like The Little Prince. He is universal. We could try to find parallels with Argentine culture, but it all comes down to the adaptability of the character. The Dude represents a lifestyle, a wisdom that is imparted without even realizing it. It transcends fiction.”

I liked that. We are so used to characters who want something, who are driven, who care passionately about something, who actually have a goal and strive to achieve it, because we see ourselves and our own desires reflected in that. It’s the vicarious thrill of success-following-struggle. I love the idea of a character whose worldview is so blissfully narrow, a character who is so utterly unconcerned with actually affecting any change around him, that he ends up imparting a kind of wisdom in the process. It’s that uncomplicated, lighthearted breeziness that I think we could all use some more of.

There is a new installment of Buenos Aires Lebowski Fest happening on Saturday, August 18th , once again at El Bar de Kowalski (Bilinghurst 835). I’m looking forward to it, because the first one was a memorable night that resulted in meeting several people that I now consider close friends. And yes, I ended up winning last year’s cosplay competition mostly due to my resemblance to the original actor. Yes, there were several more deserving costumes on display. And yeah, I felt bad about it for a while. But you know what? Feeling bad about things is not a very Dude thing to do. The Dude doesn’t stress. The Dude doesn’t fret. Nah, man. The Dude abides.