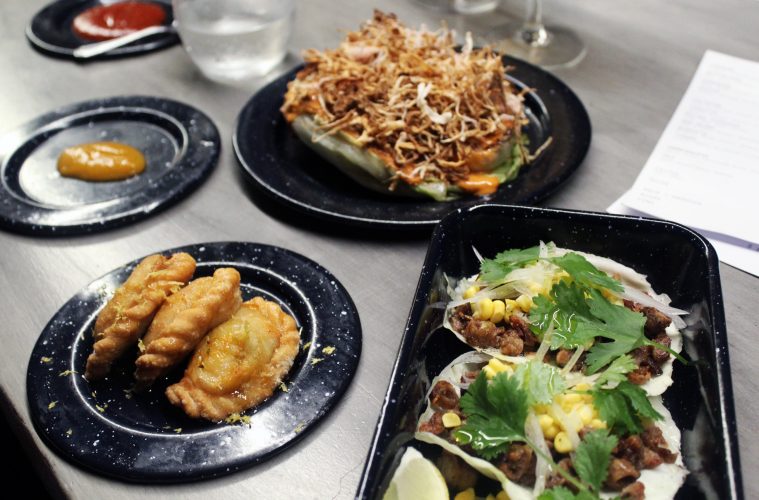 I hug my jacket tightly to my sides. Freezing drops of water bounce off the rim of my hat and announce a storm set to land at any moment. I say a silent prayer that it waits for me to safely board the bus. It is a long pilgrimage from Almagro to La Lucila, a sleepy neighborhood in Buenos Aires’ northern trenches. It is one thing to decide whether to order in mediocre Chinese or grab a napo down the street, it is quite another to willfully travel an hour and a half by bus for a meal. This is a decision. A destination more than a simple meal out. Read: this better be damn good.

Lardo & Rosemary is the kind of spot you would expect to find crammed somewhere between Humboldt and Plaza Serrano—grey exposed cinderblocks, a bright backlit menu and scratches of graffiti that lead to the bathroom. Lit like a budget telo, it’s not entirely obvious whether the look is meant to be modern sleek or industrial punk. Shared tables with stools and a few kegs for seating run up the center of the room. All the male diners are wearing sweaters—a completely erroneous detail that I feel absolutely compelled to mention. The menu is brazenly filled with names and ingredients unrecognizable to the casual diner. Reina pepiada are those Mexican sandwich things, right? asks the guy seated to my right. What the fuck is gochujan? his companion retorts.

In Palermo, this kind of restaurant feels like a standardized trick that makes me want to run back across the Cid Campeador. Here, wedged between a residential high rise and a restaurant called Chivito Jose, it is a welcome hallucination. 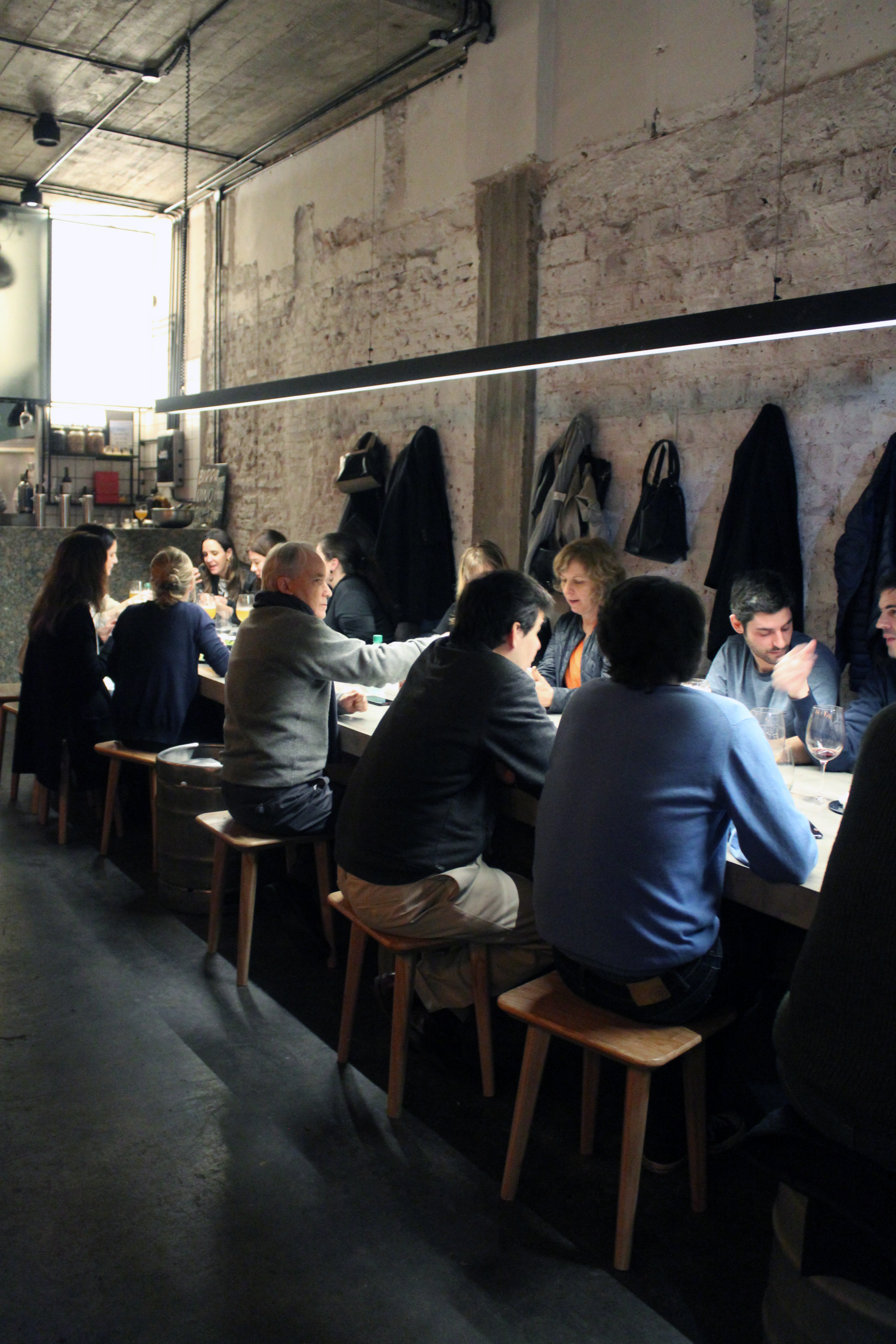 The menu is an amalgamation of street foods from around the world. Argentine empanadas, Chinese bao, Mexican tacos and Colombian arepas aren’t gimmicky but rather liberal re-interpretations that seek out commonalities despite geographic disparities. The menu was designed by Paul Feldstein, Victoria Rabinovich and Jesús Bastidas. The trio met while working at the high-end Bajo Belgrano restaurant Sucre. Prior to Lardo, Feldstein and Rabinovich opened LUPA, an understated fixed menu that stands miles apart from the explosive dishes they have created here.

Tightly packed fried chicken empanadas come mini, and like the norteño-style empies that inspire them burst from the seams with robust flavors. But rather than notes of cumin and crushed pepper, a sour citrus grows like an atomic cloud around the tongue and sticks to the back of your teeth. Cabbage leaves are subbed for corn tortillas for Asian-Argentine-Mexican inspired taquitos. Three green rounds are stuffed with gritty sweet breads that gush and crunch and crispy bites of meaty chinchulines. Homemade sriracha sauce sticks to the cracks of your lips and wraps around the top of your throat like a warm blanket.

A highly recommended lettuce dish is as beautiful and confusing as an end of the night rebound. A half round of bitter iceberg is impatiently grilled and plated before the heat could do much magic. It comes topped with a gochujang-based sauce and a Kilimanjaro mound of papery charred onion, neither of which showed traces of gochujang or onion. Maybe it was an off-night. The meal is picked back up with lenguado tiradito in a pumpkin aguachile sauce. Pasture green huacatay, mint and fennel leaves add layers of cool fresh flavors that balance out the pumpkin tigre de leche. It is what the lettuce wanted to be: subtle and light but not a push-over. 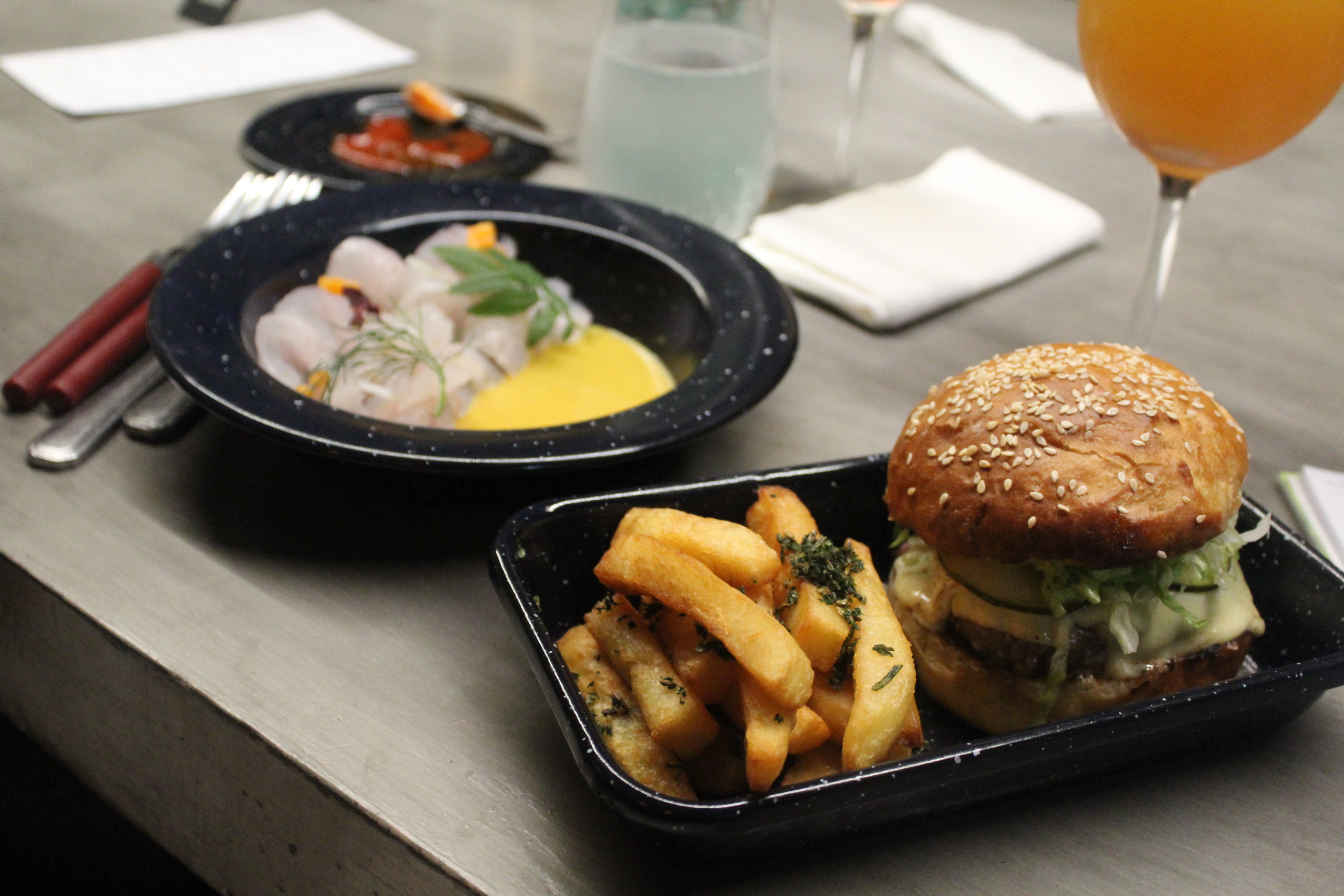 Twice fried french fries have that flakey texture reminiscent of mandioca sticks and are the perfect compliment to the house burger. Like any good hamburger, Lardo’s version is about layering a few well-chosen ingredients. Slightly sweet bread and butter pickles. Crunchy slivers of light green lettuce. A soft sesame seed bun that compresses like a water balloon and holds it shape for a respectable amount of eating time. A neutral white cheese peeks its head around when it needs to. The patty is ground daily on-site and is a mix of buttery flank steak and rump cap with a touch of bondiola. House preference calls for medium-rare and is delivered with a healthy red that bleeds into the bun. It should be washed down with a pint of beer from Colegiales microbrewery Strange Brewing, small batch beers that never repeat the same recipe.

For dessert, churros, obviously. They are freshly fried and stuffed with a caramel sauce with strong stings of cloves. They’ll burn your mouth because they are that good and we are that impatient. My only suggestion to the kitchen is to serve them in even numbers, or bring them to me when my wife is in the bathroom, as to not cause marital strife.

By the time we wrap up, it has finally begun to rain. The journey home, at least, feels a whole lot shorter.