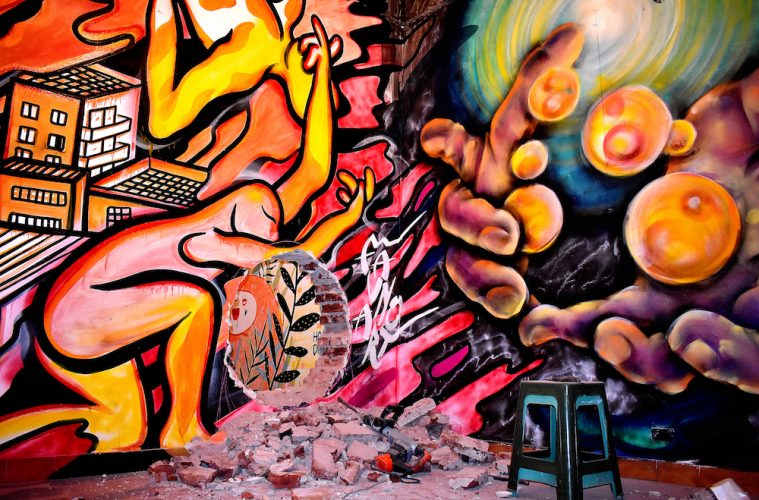 On a chilly afternoon four-days before the cultural center’s final event, I return for an intimate sit-down with three members of its curating crew – Mati Lastra, Sasha Reisin, and Alejo Naipauer. Having previously spent time with both Mati and Sasha, I’m especially interested in getting to know the thoughts and opinions of Alejo. An artist, architect, and co-worker of Mati’s on the urbanization project of Villa 31, Alejo can best be described as a curious man of few, yet poignant words.

Large holes now adorn many of the colorfully painted walls, with a three-room tunnel installation scheduled to be constructed in the coming days. Piles of dirt, brick, and commercial construction rubble seamlessly merge with the home’s living, breathing art. With dozens of artists having diligently painted, sculpted, sprayed, and intervened since my most recent visit to the Villa Ortúzar home, I’m not surprised to find myself caught between the tension of the familiar and the foreign.

Now settled in the living room, enjoying the comforts of some makeshift chairs, I begin by clarifying the founding of MUTA, piecing it together as best I can:

Mati, an architect working on the urbanization project of Villa 31, stumbled upon the fortuitous opportunity to temporarily occupy a large Villa Ortúzar home while a group of investors waited for their destruction permit. Rather than pay Mati for his services, they arrived at a quid-pro-quo arrangement requiring him to watch over the property, but with the understanding that, artistically speaking, he could do as he pleased with the house. A team of multidisciplinary artists was put together, and Cultural Center MUTA was born.

Let’s start off with some background information. How did this all come about?

Mati: When it started, it was not as a very defined project. In the beginning, it was simply the opportunity to take care of the house. I decided to move here and to start a project… a community house or co-living experience. It wasn’t very defined as a cultural center. More like “I am going to live here with other people, and we are going to do some cool things.” I moved in in December 2016. After that, the project started to take off with the concept of “mutation.” A place that’s going to change over time and eventually be demolished.

Alejo: Mati told me that he had somehow come upon this opportunity, and that he wanted to start a project. It made sense because we had been trying, little by little, for a number of years, to develop this idea. I was already interested in trying to start my own cultural center, but I realized early on that it was a matter of resources. I couldn’t find the right people interested in committing to and living out the experience. But, with our ideas and passions together, we soon made it happen. 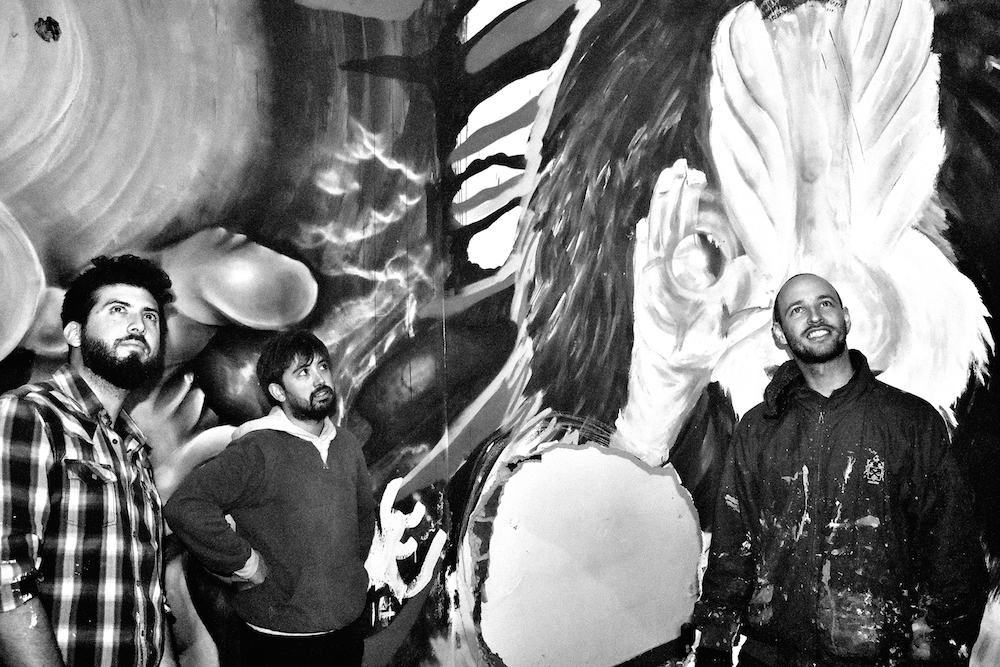 Sasha: I was living alone five blocks from here, and my contract was about to expire. Mati and Alejo had already hosted some events that I attended as a spectator and friend. Very soon though, I moved in and started to participate in the project. It was supposed to be for only three months [laughs], but sometimes in life, it’s all or nothing. It feels like a decade ago, but I used to have an office job. Around six years ago I started painting murals, doing some freelance work on the side while still working full-time. Looking at it from the outside, my office job was very good. They paid me good money and I got to travel to different countries, but it wasn’t what I wanted to do with my life. I met all these people here, and they all gave me the encouragement I need to quit my day job. I moved here in March 2017, and quit my office job one month later in order to focus on the project and painting.

What was the theme of the project? The idea of “mutation?” To start one way and end another?

Sasha: When we started the project, we were thinking mostly about the house. How we were going to “intervene” and collaborate. It was an esoteric question of how the house was going to affect how we lived. Now, after this whole experience, we have discovered that the physical house itself is nothing more than another artistic medium. The most important thing about the project was the people… the human temperature of the people who participated.

Throughout this time, MUTA has acted as a temporary home for many artists and participants who are not on the curating team. Tell me about your other roommates.

Mati: There have been a few. Sasha and I were here the majority of the time, and three other people rotated in. Gonza, Alex, y Ceci… actually [laughs], there were other people who stayed too.

How did that occur? Organically?

Sasha: It happened super organically! We had an event to cook gnocchis, with 30 people making and cooking gnocchis all throughout the house. Alex showed up, had fun, asked if the room was available to rent, and promptly moved in. Ceci, she came to a photography workshop as a participant and she stayed too [laughs]. So as you can see, it really was organic. 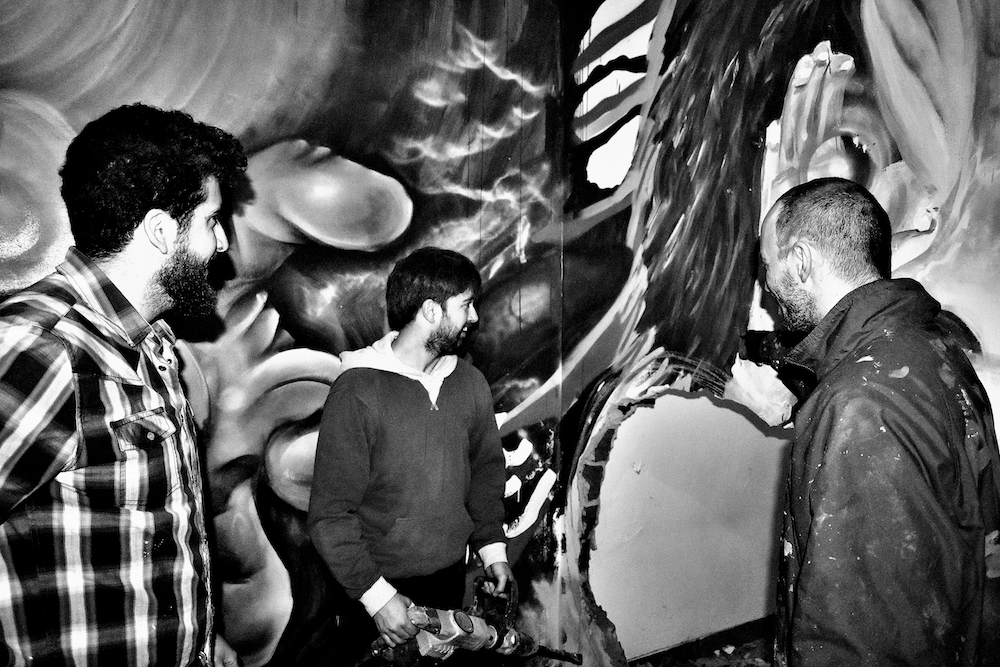 How many are on the MUTA team?

What was the impact of MUTA on the community?

Alejo: I’m not so sure I can say what the impact on the community was or is. I’m sure there was one, but I can’t quite say if it’s something so tangible. When we talk about MUTA, we aren’t just talking about a geographically defined community, but a movement… one that starts from within. If you say MUTA you invariably are talking about real people, not just the house. It has its own world in which we have all integrated. The house is a closed structure, but everyone who has come here has both taken and left something behind.

Mati: There were a lot of people who came to events as participants, only to later proposed different activities to us. They became a part of the structure. That was fundamental in terms of renewing energy. Being a temporary house, it affected both visitors and the people living in the house in a certain way. For many people, it was very attractive, the idea that the house was going to disappear. It forces you to reflect on what is, in fact, going on in your life. You understand that things disappear and have a cycle, like an urban cycle let’s say. This is the end of one cycle, and it’s going to mutate into something different. I think our community took that as a catalyst to reflect on what was happening in their lives, as well as the lives of others.

It’s almost like a metaphor for human relationships. The idea that brevity doesn’t determine the extent or depth of an emotional impact.

Sasha: Everything is going to end. Nothing lasts forever. But there is a difference between that as an abstract idea, and the certainty of knowing that the house is going to be demolished. We know it’s going to end, the circumstances are explicit. That understanding has made a difference. We intervened in this house knowing it was going to end. As a result, we had zero pretensions to make it look good, to fit a certain mold, or to make money.

Is there a connection between art and social responsibility?

Sasha: I believe so. We as social citizens have a responsibility because we help form the places in which we live. We participate and create, consciously or unconsciously, willing or unwilling. We all have a responsibility to ourselves and each other as citizens and social builders. Art is one of the most organic forms of expression. To me, art is defined by the creative expressions that come out of each person. These expressions are fundamental when it comes to social responsibility. We should all participate more. We should all intervene more in the places in which we live. It’s a form of human expression.

Is MUTA a reflection of a broader political ideology?

Mati: I am optimistic about the growth of cultural centers like MUTA, for participatory experiences in general. They are alternatives to the government and private wealth that are trying to push people towards a very individualistic life. I think that these kinds of places have a very exciting political power in terms of what they could create and how they gather people together. The most important thing I learned from this experience is to push people to make things together. Even more than the house and the art, if you value people and create spaces where they can meet each other, they end up working together. This means so much more than a couple of cool pictures or videos about the art. It’s something that is not very tangible, but something that could very easily be reproduced as a mechanism to resist an individualistic culture. 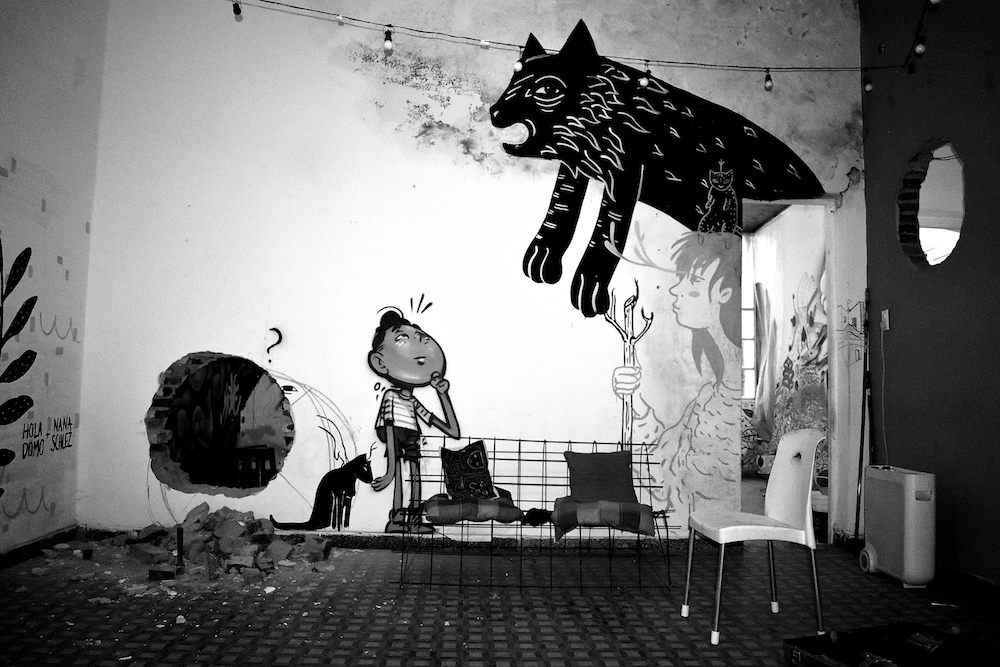 Sasha: What we did here, we did it without thinking about it. People were able to come to MUTA, propose a project, and begin working immediately with other people. A humble community without limits or predefined ways of doing things. All we did was produce the necessary conditions for people to work together. In a political sense, participatory programs should come from the government, as the government is the institution with the required power to produce these conditions. But, here in Argentina, it comes from us and other movements like ours that use art as a vehicle for community empowerment.

Plans for the future?

Alejo: Sasha and Mati are planning a trip abroad with the idea of bringing what’s called MUTA – that is, transforming a tangible structure beyond the limitations of its physical dimensions – to other countries. I am going to stay here and keep MUTA alive in Buenos Aires. A part of MUTA will stay here and another part will leave. I don’t know what is going to happen, but we will continue in one form or another. But that’s the point – it’s a mutation.

In a few days, MUTA will hold its last event before being destroyed. Do you guys need, or even want closure?

Mati: For me, it’s not the end of the story, it’s merely the end of a single chapter.

[All three nod in agreement] 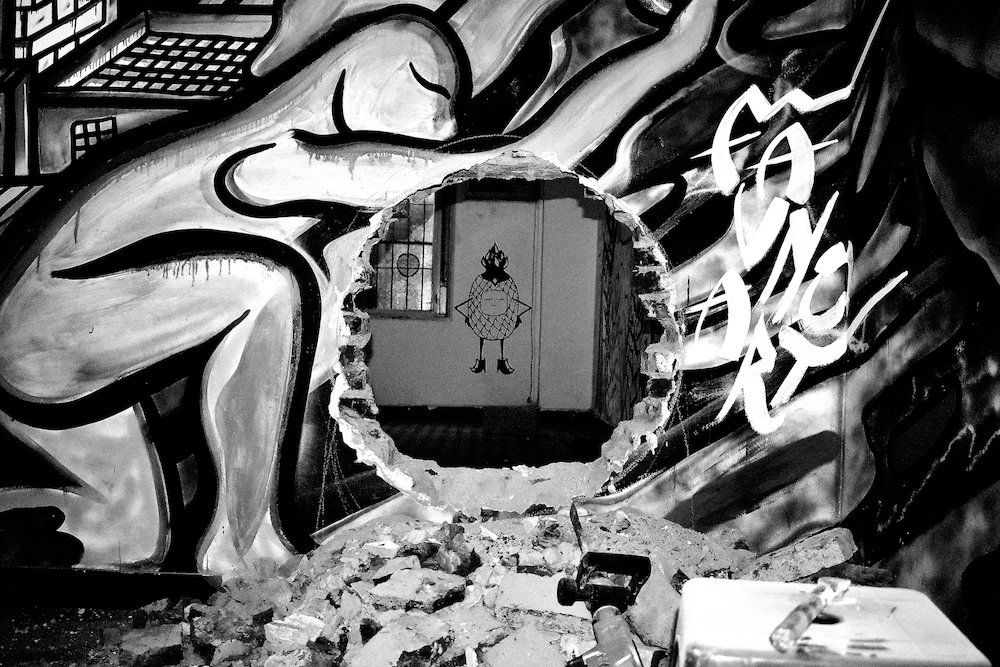 The fourth and final installment of this series will be published next Tuesday, July 24th.