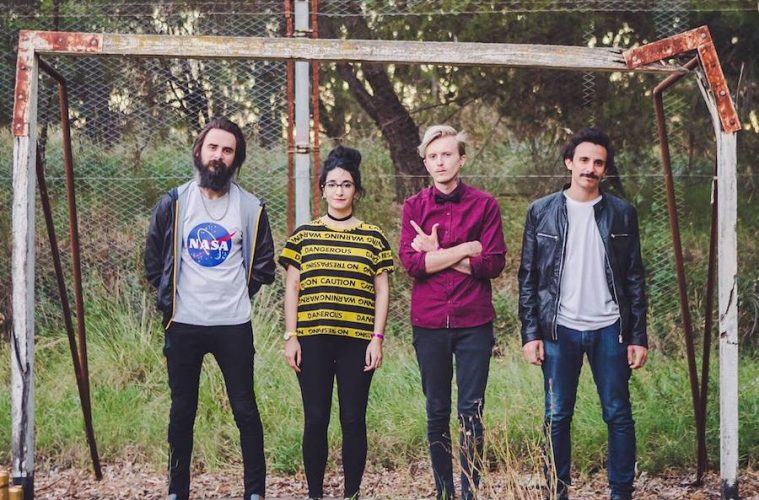 Interview | On The Road With Las Jovenes Idealistas

I speak from experience: For your average indie rock band, the pay is poor, the work of self-promotion is constant and often exhausting, and there is no guarantee of professional success, despite the overwhelming effort that you put into it. Yet there are countless bands filling the Argentine indie rock scene, and if they’re doing it right, then their projects can still flourish, fed from a bottomless well of pure love for what they do and their affection for their fellow bandmates.

One such band is Las Jovenes Idealistas, a band born entirely out of friendship, shared interests, and a sunny outlook on life that shines through their music and in our recent interview with them, as related below:

How did you guys come to call yourselves “‘Las Jóvenes Idealistas?” Where did this name come from?

Back in 2016, we were still a lo-fi trio, without a bass player. Our first album was almost finished, but those songs were more like Leandro’s (Navideño) solo project. During the recording process, a newfound sense of teamwork was born, and we decided to start a band. Amidst all that, we had to play a show in Villa Ventana, in the sierras of Buenos Aires province. We didn’t have a name yet, so we said “Okay, let’s call ourselves ‘Los Jóvenes Idealistas’ (‘The Idealist Young Men’). Xenon added: “No, even better, ‘LAS Jóvenes Idealistas’ (The Idealist Young Women’).” It was half intuition, half circumstance – we really liked it and we knew that the feminine article made it so much more powerful, something that became even stronger when Any joined the band. In many ways, it comes to break that tradition of a group of guys and girls using masculine articles or pronouns, it’s about enthusiasm and passion. It gave us an identity that we love and defend.

Your band’s history is deeply rooted in friendship – how did you become friends? How has your friendship affected the band and its evolution?

Xenon and Juana (Any) studied literature together at the UNS (Bahía Blanca), and so did I a couple of years earlier, and Ayudante is my brother. We occasionally crossed each other’s paths in the hallways — we’re all avid readers and we all write poetry. That was the main point of contact and the reason why we hit it off aesthetically, ethically, and personally. We released an EP in which we musicalized American and Argentine poetry that’s called ‘Esto es sólo para decir’ (after ‘This Is Just To Say’, the William Carlos Williams’ poem). We like to think of ourselves as ‘sentimental objectivists.’ And the friendship cemented the band. I mean, I don’t know if this project would work with a group of people that were ‘musicians,’ only connected by the musical project. During our trips, rehearsals or hangouts we talk about life, love, politics, sad stuff, happy stuff; that’s basically what propels this whole thing forward.

What is your process when it comes to songwriting?

Leandro: With time, it became a more collective process: someone comes up with some lyrics, an idea, sometimes a couple of chords and we all work with that. Since we’re sometimes far from each other (Ayudante lives in Coronel Suárez), cell phone and Whatsapp recordings are super helpful and used a lot.

What are your biggest musical influences?

Leandro: It’s impossible to deny the influence LAPTRA has had on our sound. Also, Sonic Youth, Deerhunter, and American indie music from the ‘90s. At the same time, each one of us has a different personal background. In the combination and appropriation of these influences, and even in the errors, the sonic identity of the band is created.

Who do you think are the most interesting bands in the underground scene right now?

Leandro: We’re fans of the national indie scene. We love how Él Mató and the rest of the LAPTRA bands made self-management a common and loving practice, that inspires us. And we pay attention to everything that comes out, we’re restless listeners. The new Tobogán Andaluz is beautiful, and so is the new Ligas, the new Koyi and the EPs from Boedo and Fervors. Sadly, there isn’t enough time to listen to it all. But that speaks volumes of the dynamism, the production values, and the creative power of an amazing scene. To us, being a tiny spot in that beautiful map, is awesome.

If you could play a show with any band, from the past or present, who would it be?

Leandro: First of all, we’ve had the pleasure of playing with amazing bands of whom we’ve been longtime fans: Bestia Bebé, Tobogán Andaluz, Koyi, Señorita Trueno Negro. Soon we’ll play with 107 Faunos and Cabeza Flotante. Along the way, we discovered awesome bands that we didn’t know and are now in our daily playlists: Fervors, María, Boedo, Juanitzo y el Lobo. 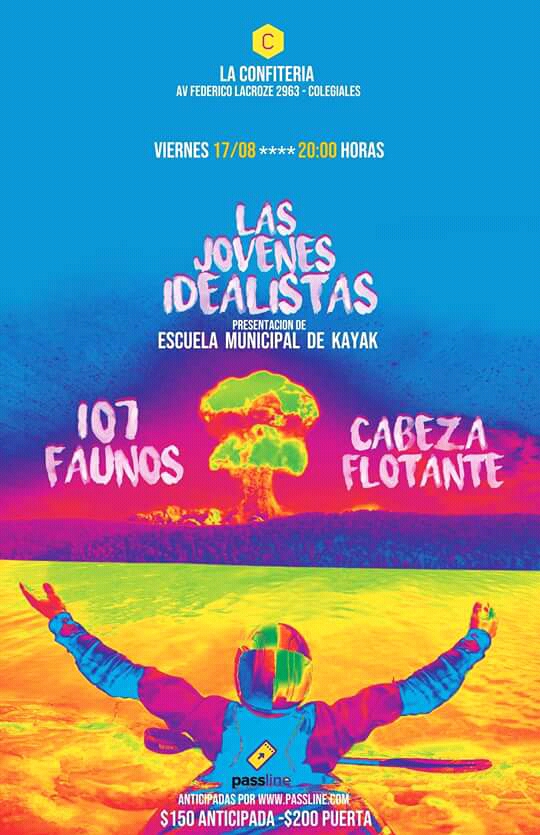 But okay, it doesn’t hurt to dream. I’m gonna make a list that might be controversial but that also illustrates our musical ‘heterodoxy’: Él Mató a un Policía Motorizado, Sonic Youth, The Rolling Stones, Las Ligas Menores, Radiohead, El robot bajo el agua, Yo La Tengo, Pavement, Wild Nothing, Tan Biónica, and, in some sort of strange festival, we’d like to open for Mala Fama and then dance cumbia all night.

What inspires you to write songs?

Leandro: Everything. The joy of leisure, love and heartbreak, the brotherly ties of friendship, the day-to-day stuff, the eagerness to say something in a song as a small truth… life itself with its luminous parts and its gray areas. We love everything, that’s why we’re idealists.

How was the recording process for this last album ‘Escuela Municipal de Kayak’?

Leandro: It was really hot (laughs). We recorded it in the middle of January of this year, in a studio in Bahía Blanca with our friend Jorge Ludueña. Those days were intense, we spent several hours together. I don’t know if it was an enjoyable experience. To put it better: we were nervous, it was the first time we had worked so hard on the pre-production, and we wanted it to turn out well, the best within our possibilities. And, well, when we heard Peta’s (Jose D’Agostino of Estudio Moloko) mastered tracks we were super happy. All those days slow-roasting our hearts and brains were finally worth it. 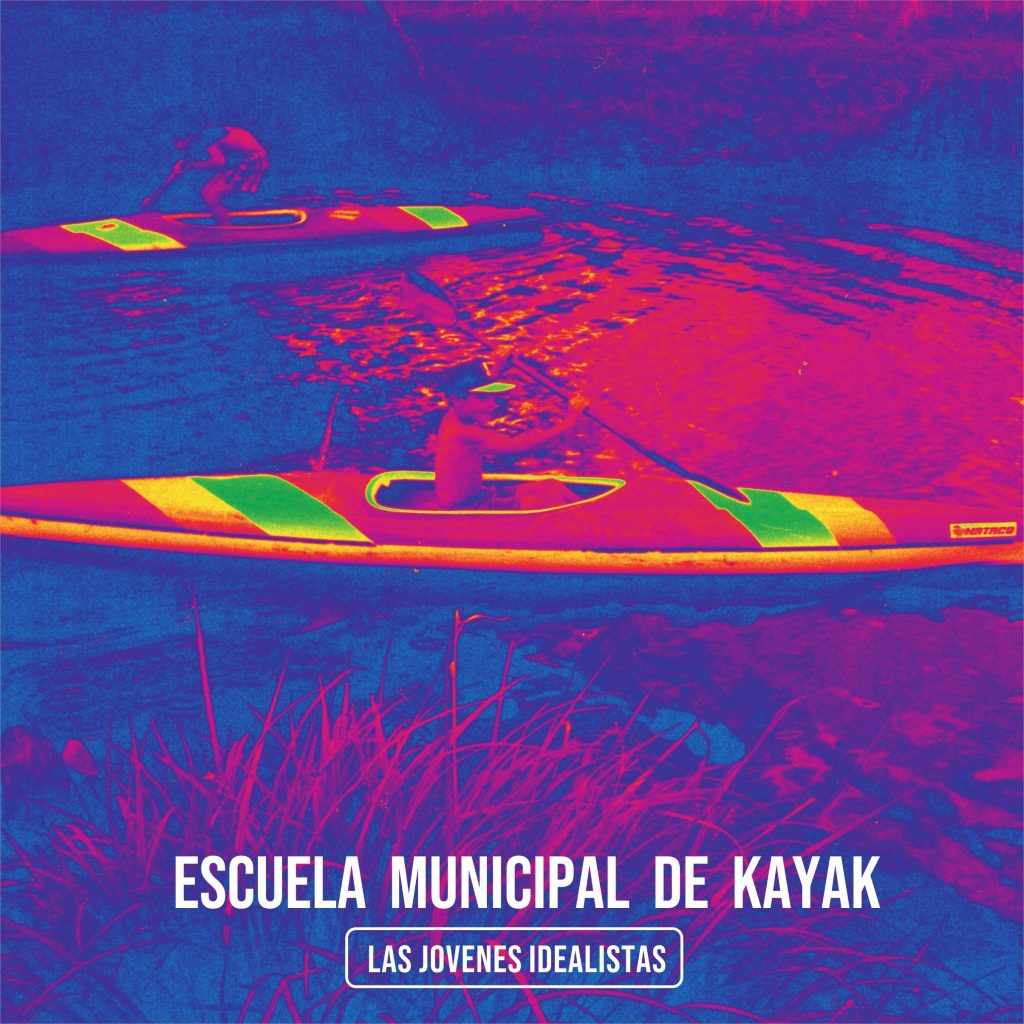 Where have you guys gone on tour? Which places were you favorite?

Leandro: We played Mexico City, Santiago de Chile, Capital Federal, La Plata, and around town in Bahia Blanca. I don’t know if we could choose just one place. Every trip was beautiful. When the band started becoming a more serious project, one of our first goals was to travel, to break free of close-minded localism. We even said that we wanted our albums to be our economy flight tickets to the world. And because of that, we’re super thankful for all the landscapes, the cities, and the friends that have crossed our path. That makes it all worthwhile.

A lot of things can happen on the road… do you have any funny stories you can tell?

Leandro: Oh, a lot. Driving to Chile for 2 days in a car to play 20 minutes, only to have our power strip fail. Stopping in Saladillo every time we return from playing in Capital, and eating the best roadside choris in the country. Inventing games and polls in the car. During our first trip, someone offered someone else a ‘vegan apple,’ and they totally bought it. It’s a 9 hour drive from Bahía Blanca to Capital, it’s a lot of time. All sorts of things happen.

If you could travel in time and tell your younger (and idealistic) selves something, what would it be?

Leandro: I think we’d tell ourselves to keep moving forward with love and enthusiasm. We’d reaffirm to ourselves that we want to live for the music, because that’s the true gain. Keep enjoying the road, literally (like routes 51 and 76). It’s all about the journey.