It is 8 pm on a Saturday night at the height of summer. The air boils and sticks like dew on the skin. A young couple pushing a baby stroller and sipping on freshly cracked cans of beer furl their eyebrows over a menu taped to the door of 13 Fronteras, a comfortable American-inspired bistro in the middle of San Telmo. A mix of confusion and curiosity grows on their faces as they go down the list of dishes and  silently mouth pacu, jabalí, kimchi and pupusas to one another.

Inside, three young cooks work scrupulously behind the long marble bar that separates the kitchen from the diners. One weighs out rounds of freshly ground mandioca root before pressing them to make tortillas. Another purposefully chops napa cabbage and reserves them in a white tray to be marinated for kimchi. Head chef and owner Dave Soady, dressed in a dapper chef’s coat, pulls a pen from a pocket on his shoulder and carefully takes notes for a new ice cream recipe he is trying out.

Small tokens of a cross-continental trip that began in Washington DC and finished in Buenos Aires are strewn around the room. This trip, also, is what informs the menu. Soady and his wife drove across thirteen borders before arriving to Buenos Aires, stopping and settling along the way and creating a mental cookbook that would eventually become 13 Fronteras. This isn’t American food in the gringo sense but a cross pollination of dishes from across North, Central and South America and Soady’s own curiosities that sit happily on one menu. 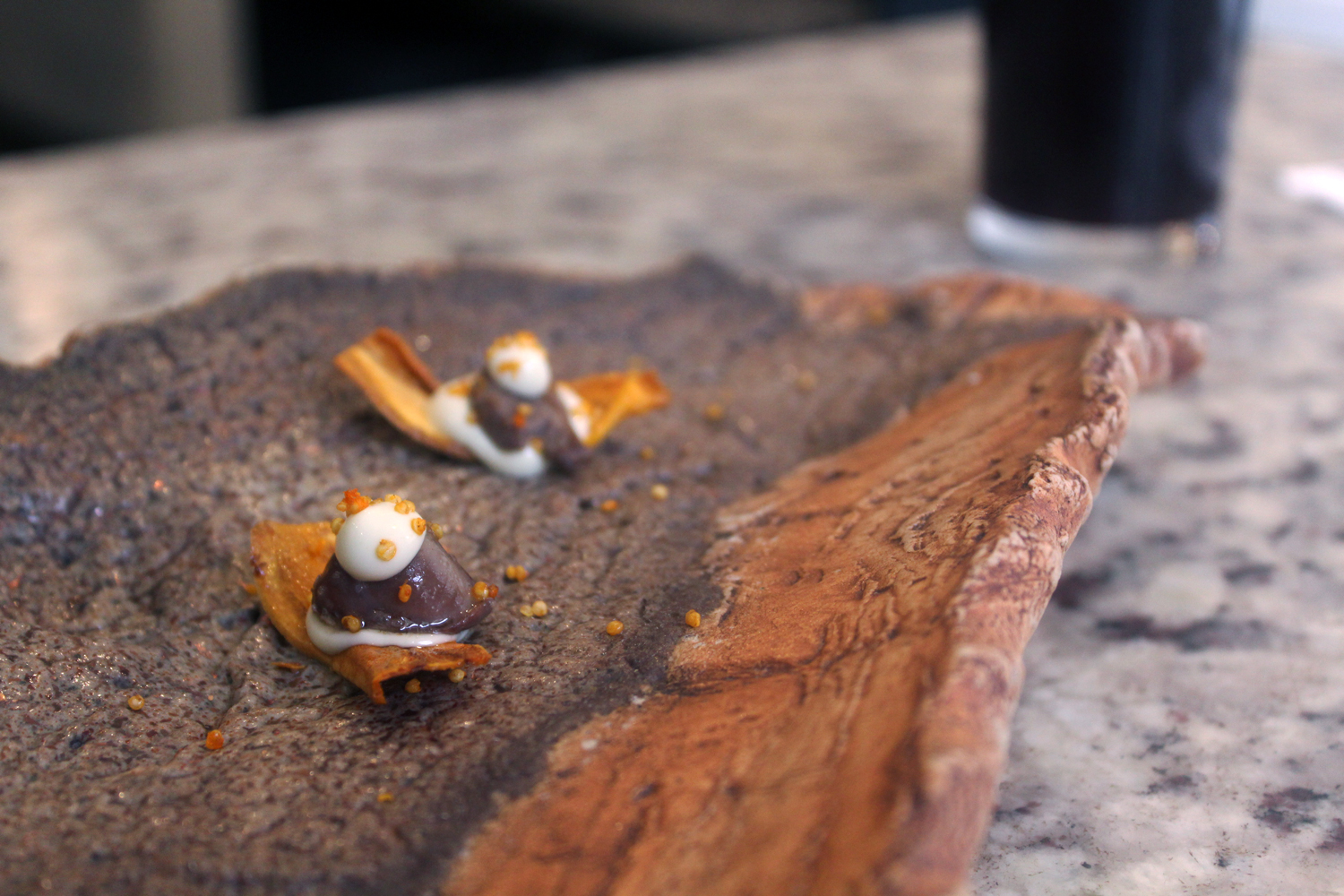 The concept menu gravitates towards the technical with an ethereal plating style normally reserved for high-end restaurants. Soady quietly prepares an amuse-bouche: dehydrated carrot that holds a leek emulsion and grilled rabbit heart. He sets it down between our glasses of clove-scented chicha morada and tamarind juice. It is given to us without a single word as if it was as ordinary as a plate of milanesa. It’s this silent nonchalance that makes the bizarre feel completely normal and, ironically, often opens up the dialogue between diners and this small team of cooks. Despite the dishes being served, the restaurant feels comfortable and unpretentious.

Aguachile verde is a line of river salmon and dehydrated shrimp over a freshly fried corn tostada. The tenderness of the salmon compliments the flaky crunches of shrimp. Miniscule bites of red onion and cilantro heighten the citrus flavors of the creamy cucumber-based aguachile. Quick acidic punches come from freshly sliced rounds of radish. Ration carefully so that you can sop up every bit of salsa with fish. Surubí tacos are prepared with fermented red bell peppers. Corn tortillas are made by hand with hominy corn and fried before being stuffed with the sauteed surubi and bell pepper. It comes topped with cilantro and a savory yellow pepper sauce. Surubi skin is quickly fried and adds an extra layer of crunch.

Slow-roasted pork belly is served with sopa paraguaya and in-house kimchi. The fatty cut of pork pairs unexpectedly well with the homey slice of sopa, a cheesy cornbread. The mild sweet corn flavors pop on and off the tongue alongside the acidic kimchi. Many of the dishes on the menu include some sort of preserved, pickled or fermented ingredient in an effort to contribute as little waste as possible. 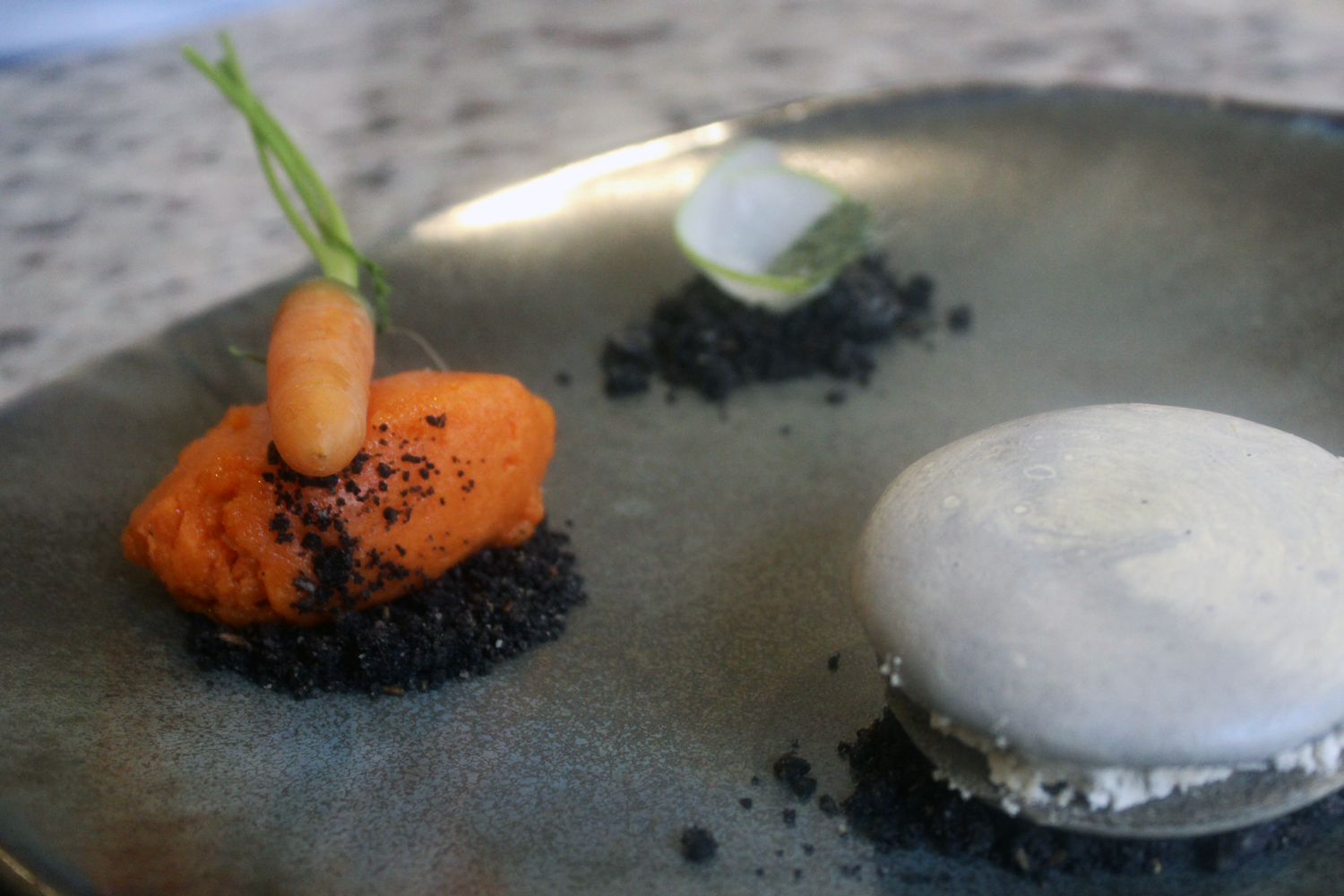 For dessert, the menu provides no description and Soady and his team refuse to give details. Guests have two options, El Salvador or Mendoza. Our imaginations and pre-conceptions are meant to fuel our final decision. I chose the Mendoza and was brought a plate that contained a mound of carrot sorbet topped with a raw baby carrot, a macaron stuffed with olive cream and apple slices shaped like a cone that held faux-grass. While most expect a wine heavy dessert, Soady’s inspiration is Mendoza’s fertile soil and the variety of flavors that spring from its mountains. The sorbet was light; the natural sweetness of the carrot appears on the back of the tongue. The macaron has an indulgant pillowy texture that contains the unexpected saltiness of an olive cream. An addictive earth brown crumble made of sugar and fennel seeds are sprinkled around the dish and unifies the sweet, salty, bitter and tang that come in and out of focus.

13 Fronteras is open for lunch and dinner service. On weekends, it is recommended to make a reservation. Grab a seat at the bar and ask for a house recommendation. When the rabbit heart arrives, don’t be surprised.

Open: Sunday through Thursday 12 to 11pm; Friday, Saturday 12pm to 12am; closed Mondays