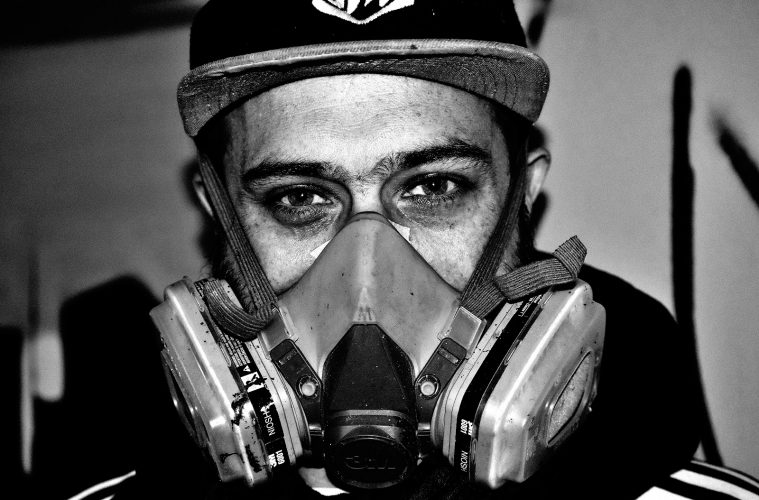 This is the second installment of a 4-piece series. You may read the first installment here.

A chilly late May has transitioned to a cold early June, and Cultural Center MUTA continues to weigh heavily on my mind.

Mati Lastra has just invited me to document a mural painting event to be held at MUTA in a few days time. Although I know his story needs to be told, I’m unsure of what role – if any – I’m destined to play. As Mati casually describes to me the anticipated sights and sounds of the upcoming intervención, it dawns on me that I’ve somehow scored a front-row ticket to a street art “jam sesh” for some of the most creative and inspiring artists of the BA underground scene. Cof, Fa, k2man*, Ezequiel Robledo, and countless others of the nameless and faceless who nonetheless inspire us daily in our frequent transitions from barrio, to subte, to bondi.

“Whatever you need,” Mati tells me, “you can count on us.”

Yes, Mati, you best believe I will. 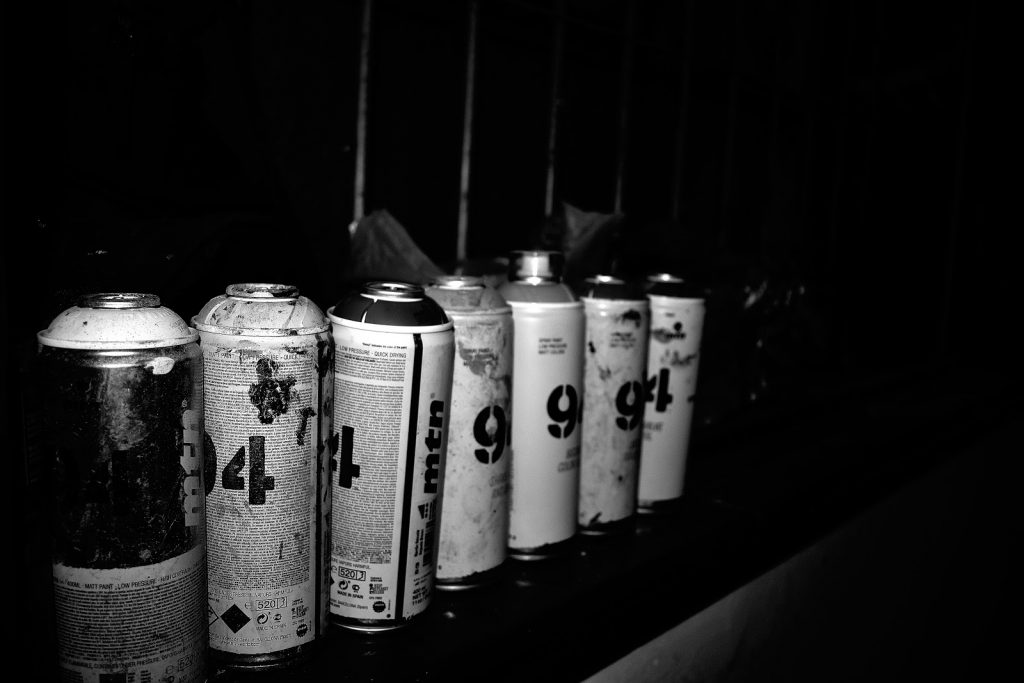 The day of the event finally arrives, and I find myself anxious as I make my return to Villa Ortúzar.

Exiting an early morning westbound train, I stop for a quick cortado in one the neighborhood’s many vibrant cafés, before opting to finish the remainder of my trip on foot. As I come upon the home, I’m surprised to discover that construction scaffolding has recently been positioned around the entirety of the facade – an ominous reminder of MUTA’s impending finality. Not only is the door both gated and locked, but it’s almost completely obscured from my line of sight.

I manage to knock – once, twice, three times…

As I’m winding-up for a fourth, the door suddenly opens to reveal two-sets of unfamiliar and apprehensive eyes. I quickly realize that my fondness for punctuality has manifested (yet again), in my latest episode of “boludo arrives early.” Speaking in a tone less confident than the one I would like to convey, I explain to the man and woman standing before me that I’m an acquaintance of Mati’s, a photojournalist/writer, and that I’m here to take pictures and document the day. This seems to do the trick, as their piercing stares of uneasy “who are you and why are you here” misgivings soon make way for ample amounts of kindness and affection. As they unlock the door and open the scaffolding, they introduce themselves to me as Sasha Reisin and Malén Benvenuto, two additional members of the MUTA curating crew.

Malén, with her vintage wardrobe, silver accessories, and slightly visible body art, exudes a confident, but rebellious elegance. Sasha, in some ragtag chinos, a paint-stained bomber jacket, and with his pensive disposition, calls to mind images of a new age punk. As highly respected muralists on the Buenos Aires street art scene, each one has played an intimate role in the creation and continuing evolution of the MUTA experience.

Malén explains to me that Mati has stepped out to pick up some supplies, but that I should relax and make myself at home. As most of the artists have yet to arrive, the event won’t officially start for another hour or so. I proceed to follow her through the home, meeting and greeting where appropriate, before surreptitiously making my way to the still unexplored terrace above. Securely gripping the support railing as I bound my way up the platform-staggered stairs, the tangle of narrow walls and secret rooms soon expands to reveal a tremendous open-air oasis of both aerosol and brush-based art. Having previously hosted MUTA’s inaugural mural painting event exactly one year prior (with plenty of asados, ferias, and encuentros in-between), the names and creations of countless artists are scattered across every wall, nook, and cranny.

Finding myself with time to spare beneath the blissful warmth of the late morning sun, I set about capturing the landscape before me. 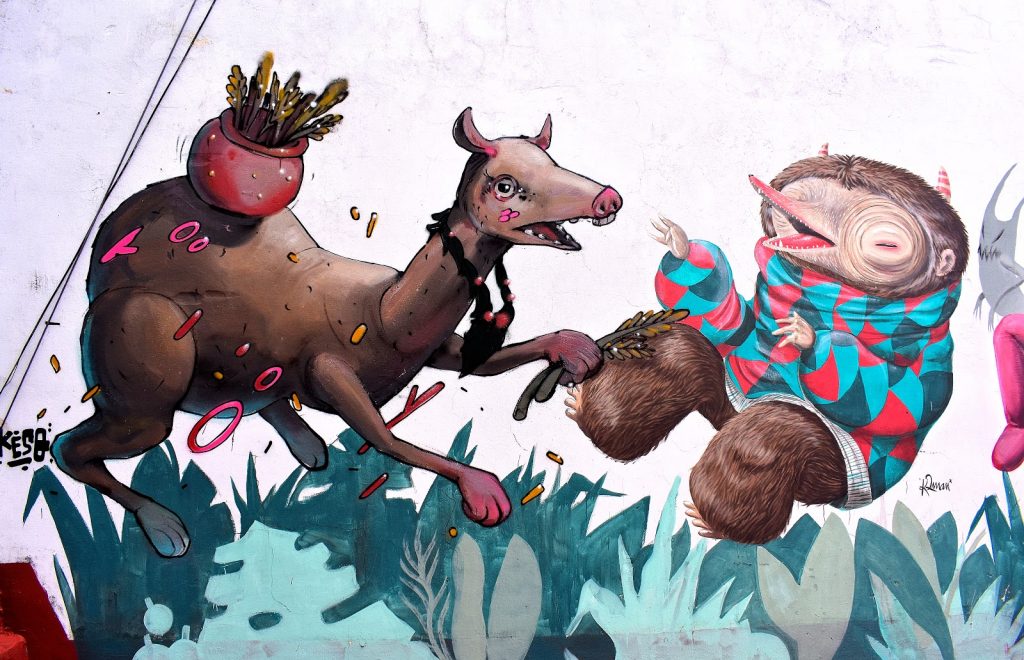 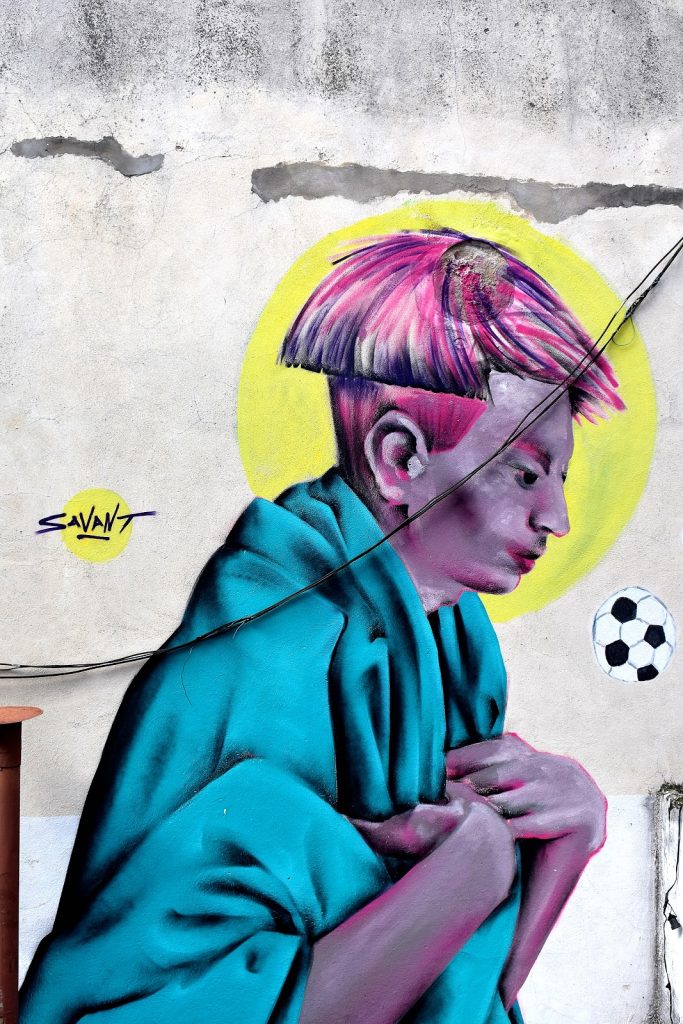 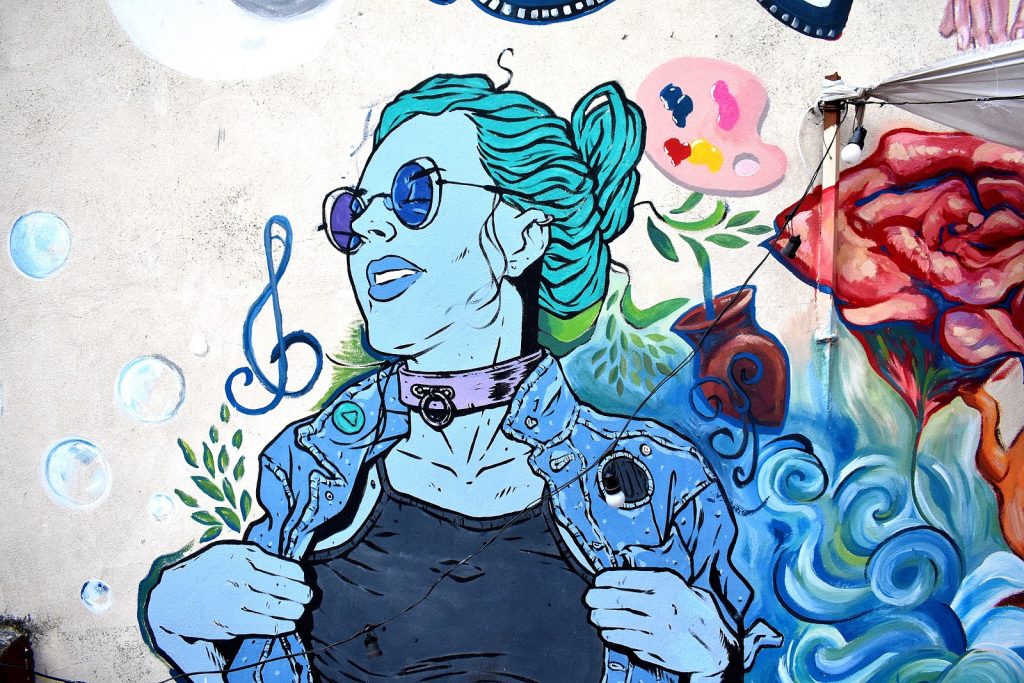 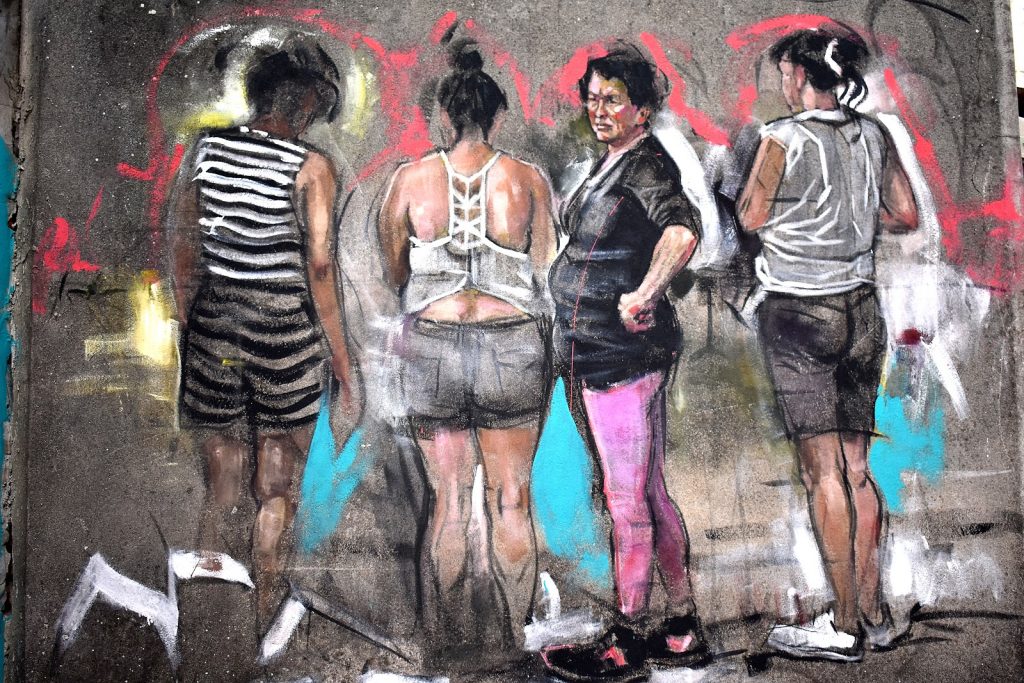 Descending the stairs as I return to the patio below, I stumble upon a growing group of artists and collaborators gathered just outside of the bustling kitchen. I make eye contact with Malén, and she motions for me to join the group in sharing in one final mate – a “last rite” of sorts before we embark on our impending journey into the abyss of the creative unknown. With the magic of “mate talk” now in full effect, I unexpectedly find myself recounting the intimate details of my Argentine backstory – my dreams, fears, aspirations and all – to an attentive and intrigued audience of strangers. And why not? If the time-tested ethic of communal-based art is to speak truth to the people, then I suppose it makes sense to expect the truth in return. 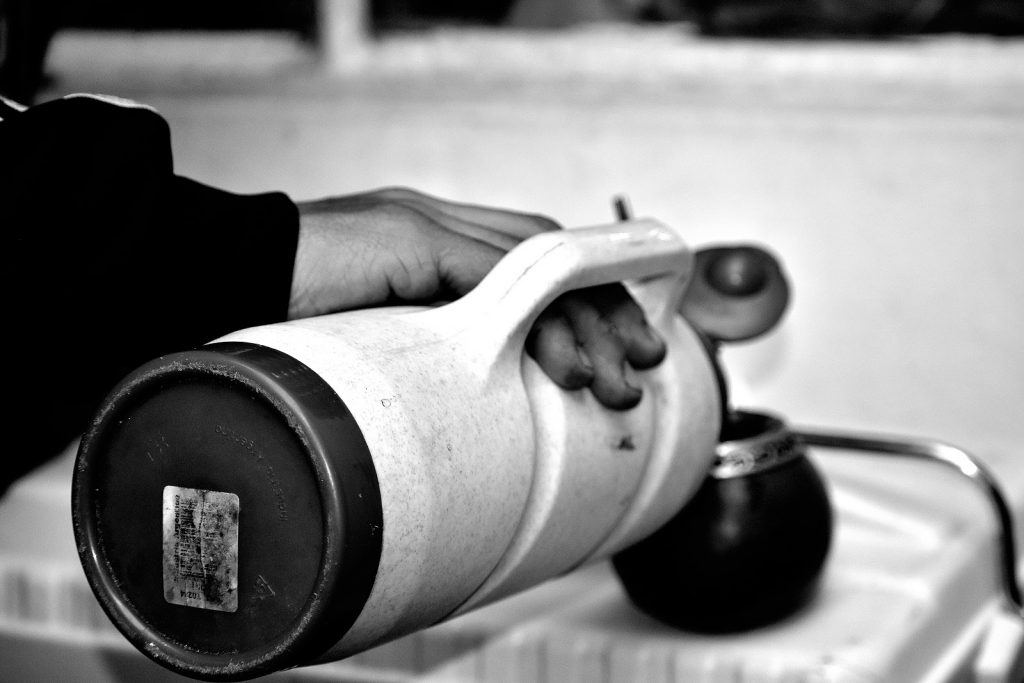 Very soon, the house is overflowing with artists of all colors, creeds, and convictions – poets, architects, muralists, graphic designers, musicians, etc. Everywhere I look, someone is drawing, painting, playing, mixing, laughing, loving… redefining “community” from within the confines of MUTA’s physically limited space.

Like a man possessed, I frantically pace from room-to-room with my camera, not wanting to miss a moment of the compelling scene unfolding before me: Malén – living room – delicately detailing in black and white. Sasha – main corridor – breathing life into the visage of a snarling apex predator. Ezequiel – east corridor – exhilarating all with his graceful free-hand brushwork. Fa – dining room – outlining the dimensions of a living, breathing city block. Cof – northeast corner – testing color combinations from beneath the protection of his Bane-like respirator mask. Random dog – northwest corner – eating paint. Random guy – kitchen foyer – eating pizza. Random girl – everywhere – running around the house spraying hundreds (maybe even thousands) of bright orange dots. 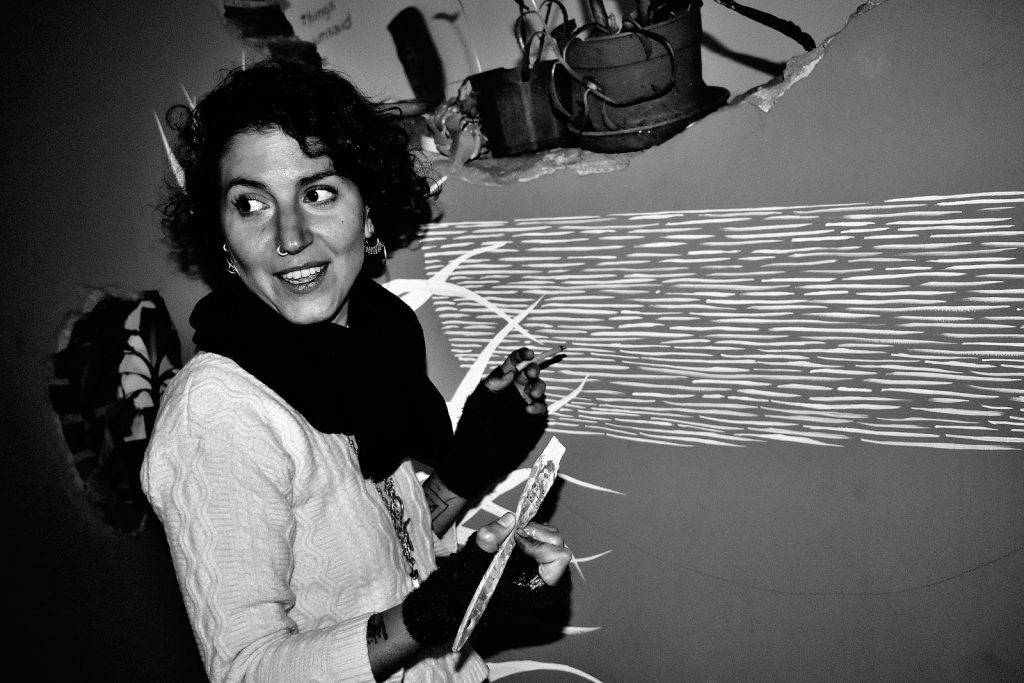 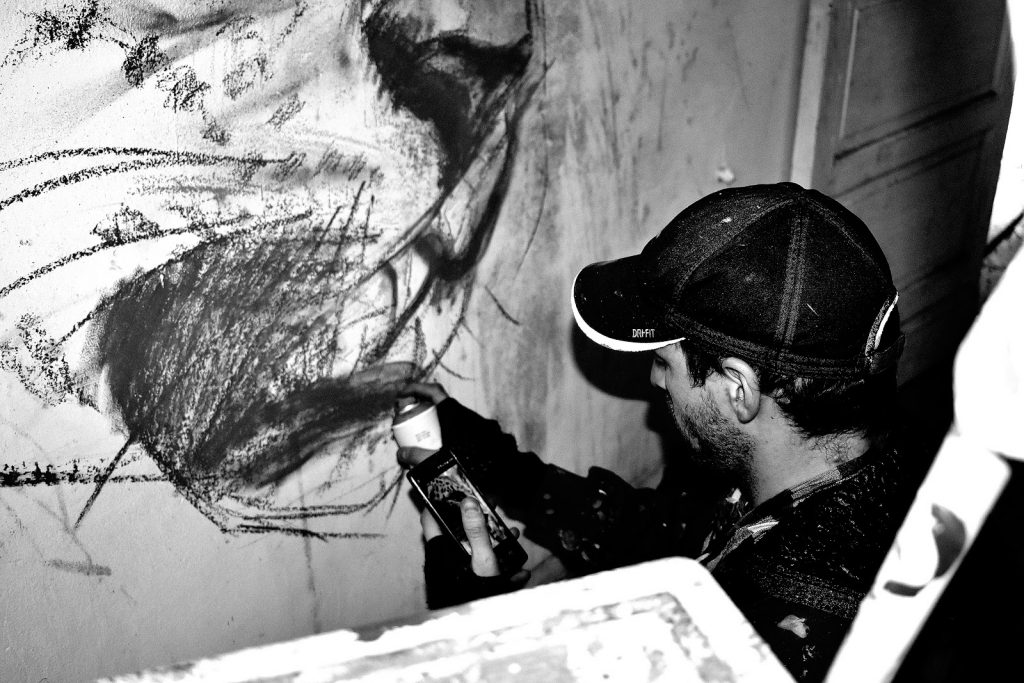 By the late afternoon, hours have passed with little notice or concern.

Three more artists arrive and begin work opposite Fa in the dining room – spraying, mixing, and painting at break-neck speeds. Before long, the toxic vapors are so intense that no one dares go near, not even the paint eating dog. Hovering at the door, I snake my way in, trying my best to mimic the subtle, yet decisive movements of my peers. Eyes stinging, unable to focus, I blindly snap pictures as I attempt (in vain) to prematurely interpret the creations taking shape on the walls before me: 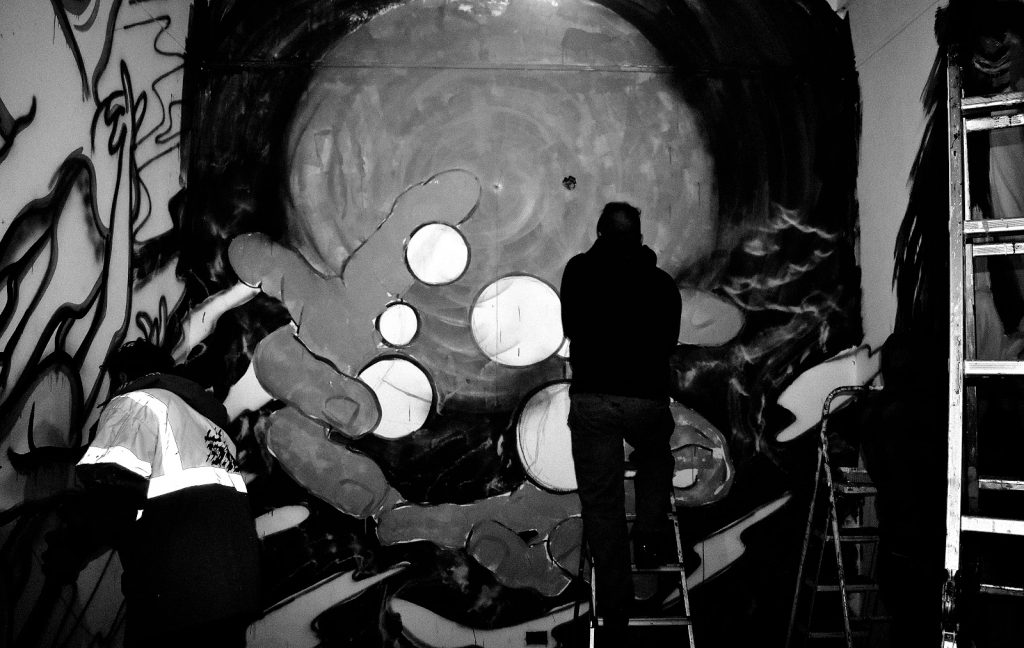 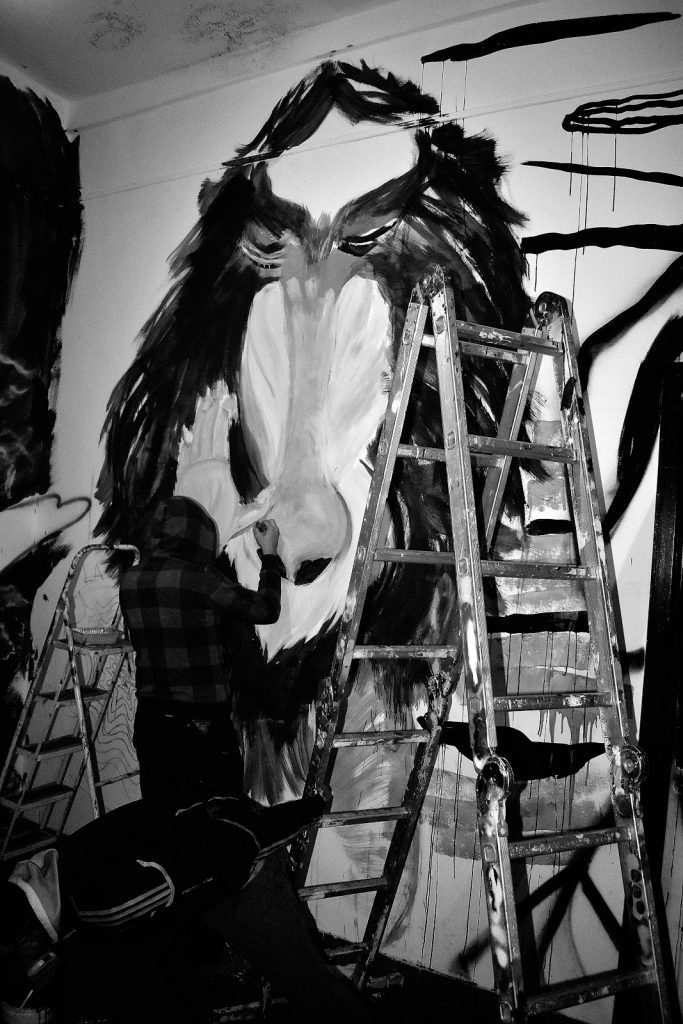 Blurry eyed, short of breath, and struggling through a paint-induced high, I talk to the ever-eclectic Fa as he puts the finishing touches on his abstract ode to the urban centers that many of us call home. An active MUTA participant from the very beginning, I ask for his thoughts on what the continuing “mutation” of this humble space means to him.

Fa: Exactly. When I first came to MUTA, they had just started to paint the house. At that moment, I was creating murals with chalk, so I made one on the patio floor. The next day it was raining, and it disappeared. From there, the joke was born of MUTA as an ephemeral experience – one that will soon disappear.

Me: Exactly. Just like how Mati lives here… [long pause, paint fumes now taking full effect] So, what are you painting?

Fa: I’m using an aesthetic focusing on buildings and human civilization. That is, how the city lives. I usually draw buildings, houses, suburbs, and other living parts of a city while suggesting that a giant human being can live within and around what I built. 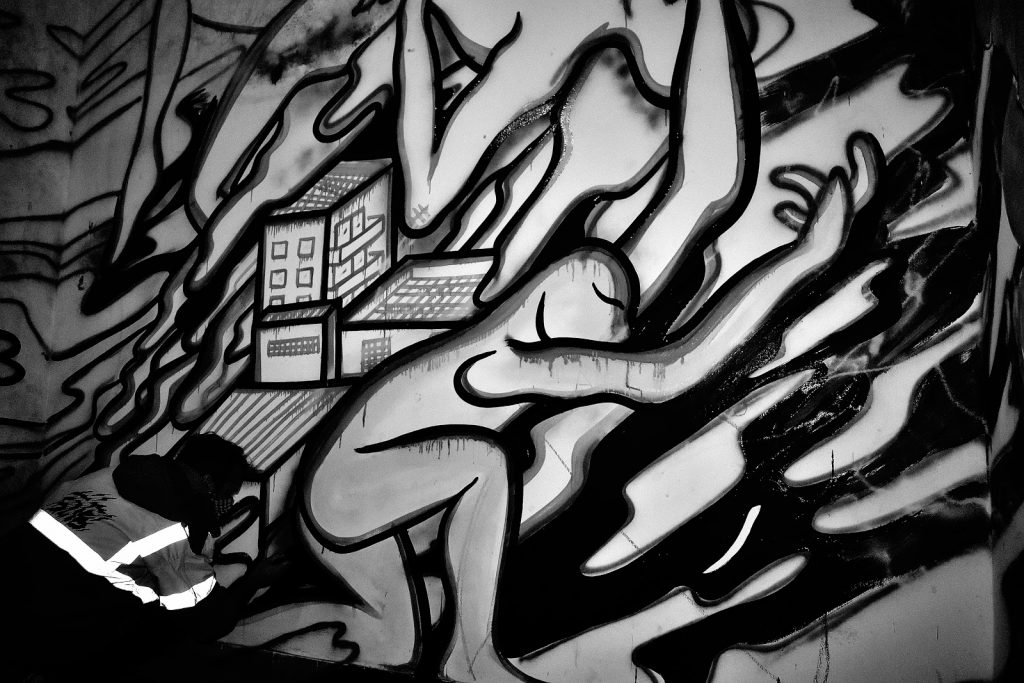 With Fa’s focus now returned to his mural, I make my way to the living room, my respiratory system in desperate need of more breathable air. It’s here that I meet a charming young Porteña named Pauli. Having very recently returned to Buenos Aires after a seven-year adventure in Rio de Janeiro, it’s her first time participating in a MUTA event. A graphic designer by profession, she skillfully sketches an outline of her soon-to-be mural – a sassy, stiletto-wearing pineapple – as we huddle together for warmth on this now frigid night.

There’s something about her tone of voice, her eyes, the way she that she touches my arm as we talk. It’s a calmness and kindness in stark contrast to the controlled chaos of the day. Consistent with the ephemeral theme of both MUTA’s community and art, Pauli doesn’t know how long she’s going to remain in BA – maybe a month, maybe less – before she moves on again, answering the ever-present call of people, places, and cultures unknown. And yet, thoughts of an uncertain future can wait. Tonight, she needs nothing more than her art, and some understanding souls who wish to revel in it. 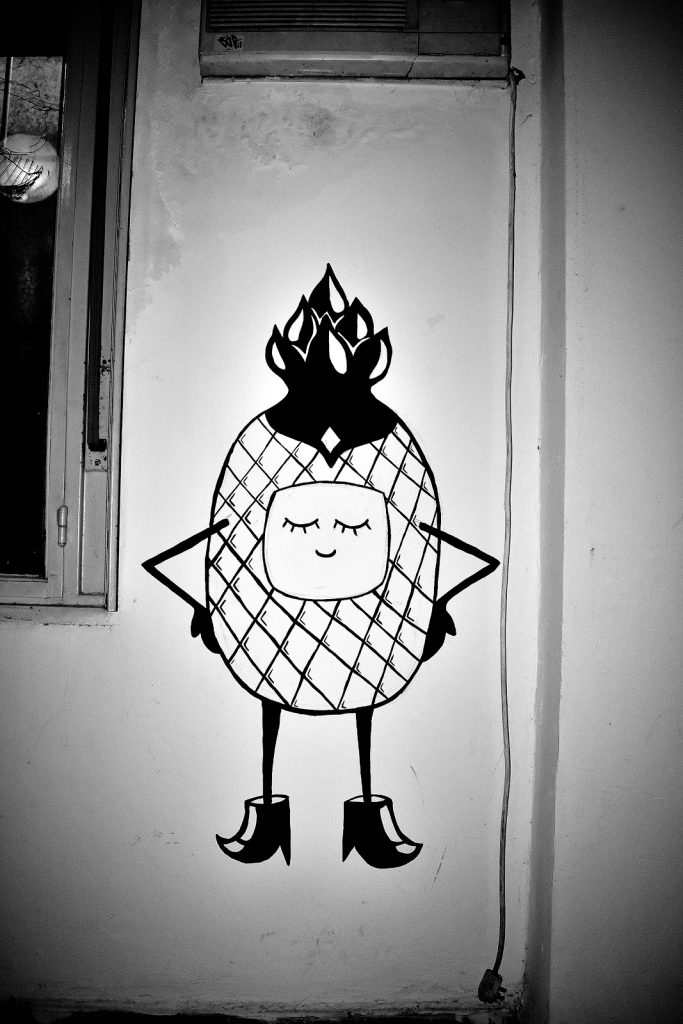 I have now been at MUTA for over seven hours – taking photos, conducting interviews, and reflecting on the lived experience of a community whose mutation will likely never end. As I stumble out the door and head home, the event rages on. More artists arrive, eager to leave their mark, temporal and spatial restraints be damned.

The third installment of this series will be published next Tuesday, July 17th.